While presented with different labels, every Storybeat theoretically is the same exact thing: a single point in time along the thread of narrative that is your story. By offering you the chance to see these Beats at different resolutions, Authors can determine for themselves how much time to spend on a particular part of their story.

Within an Act, you will find--at minimum--four Act-level Storybeats. These correspond to the Four Throughlines found in every complete narrative. They will feel more like "Sequences" because they span a greater amount of time within the narrative.

A group of Act Storybeats, therefore, creates an Act. 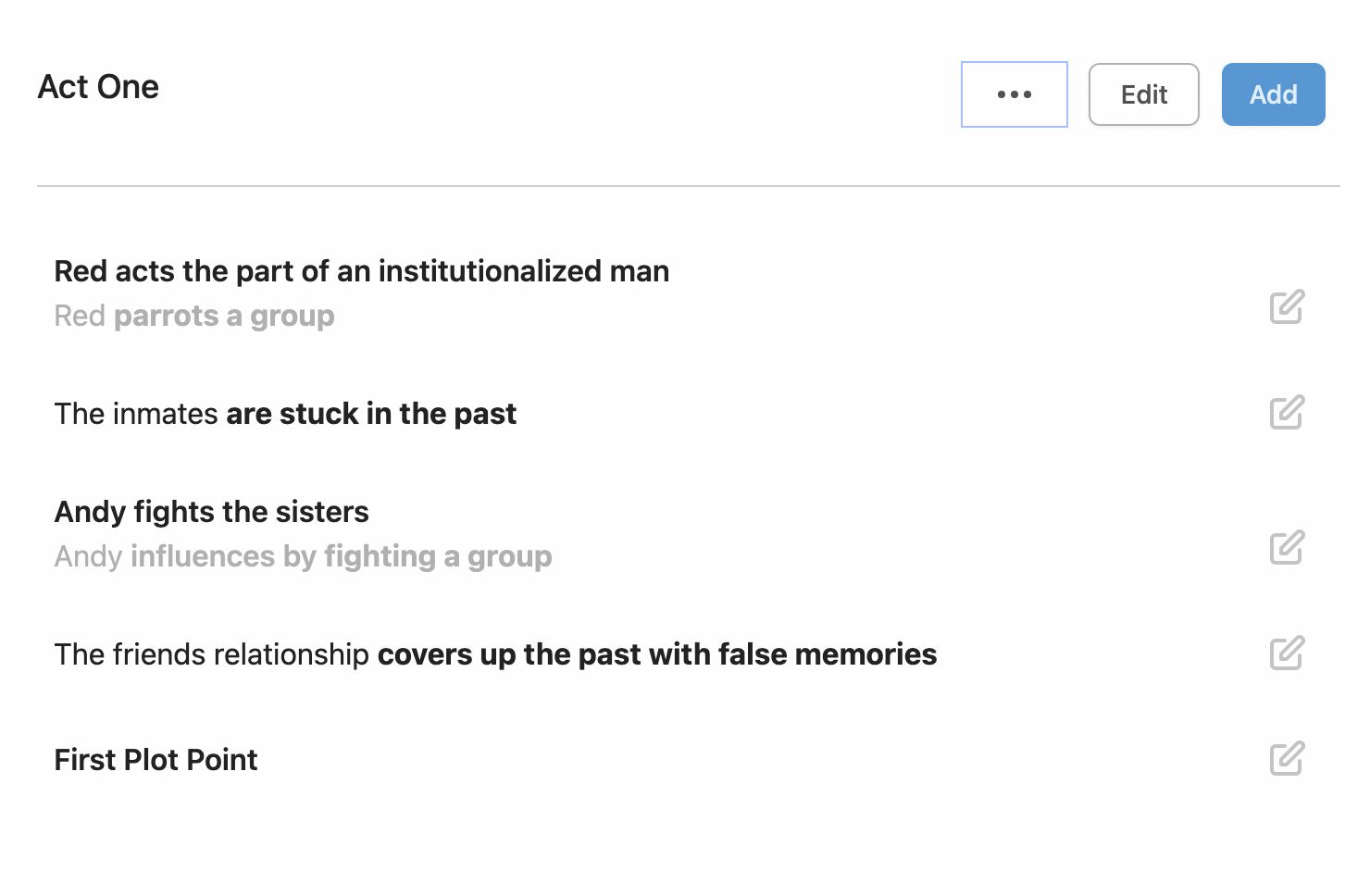 Scene Storybeats are breakdowns of their parent Act-level Storybeat. Think of these Scene Storybeats as telling the mini-"story" of the Storybeat above them. If you break a Storybeat labelled "Progress" into Scene Storybeats of "Truth, Evidence, Suspicion, and Falsehood," then those four Scenes would tell the story of Progress for that Throughline.

In the beginning of a story, Scene Storybeats often end up in their own individual Scenes, cordoned off from the others. As the narrative progresses, and tension winds up, a "Scene" in your novel or screenplay might contain three or four of these Scene Storybeats (think the ending trench scene in the original Star Wars, where Storybeats from the Main Character, Influence Character, Relationship Story, and Objective Story fall into one action-packed moment). 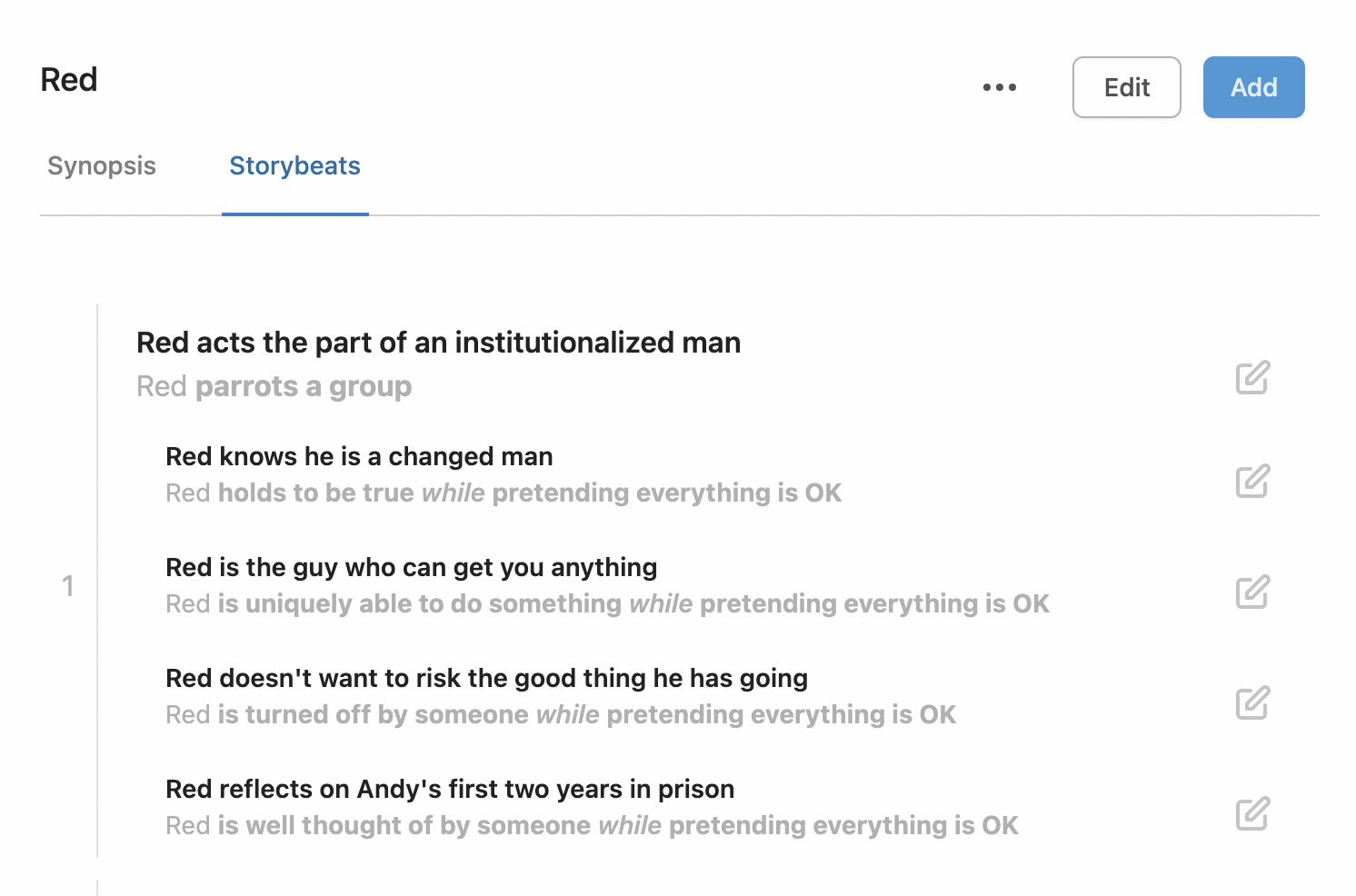 Scene Beats define the story of a Scene Storybeat. We refer to them as Beats because they represent the smallest unit of narrative you can see without losing context of the entire story. If you were to dive further, you would be telling an entirely new story within the framework of your original story (Television series and seasons and individual episodes work this way).

Think of the Scene Beats as a specific outline for what happens in your Scene Storybeat from beginning to end. Again, in the beginning these four Beats will represent the beginning, middle, and end of individual "Scenes." As you get closer to the end, several groups of Atomic Beats will work together to tell a highly dramatic and consequential climactic "Scene." 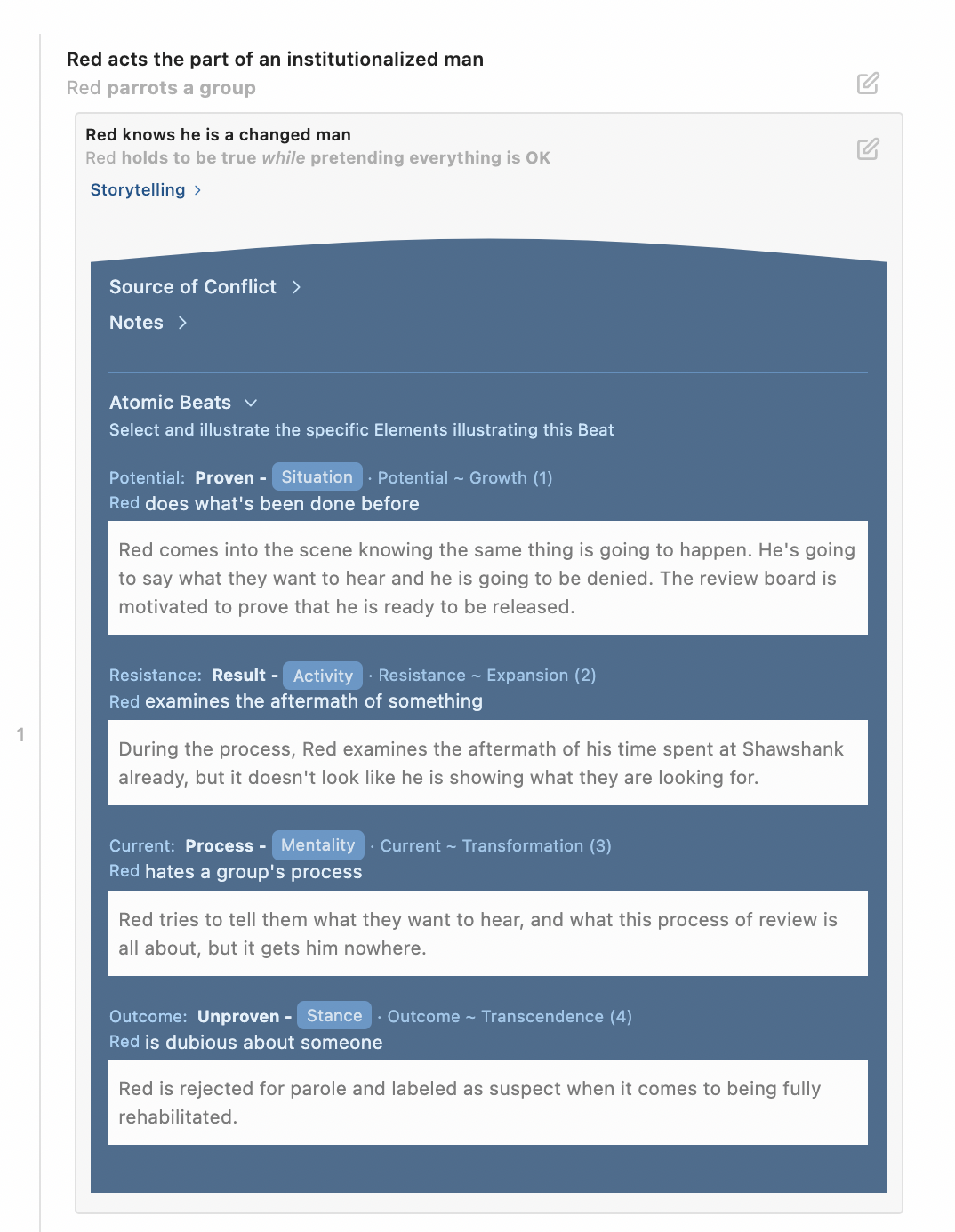 After awhile, it can be difficult to take in an entire Act's worth of Storybeats without getting lost in too much detail. If you want to scale back your vantage point, and just see the Signpost Storybeats of a Throughline or Act, use the Filter button at the top of the view to Hide or Show the Scene Storybeats.

When selected, the current view will display all the Storybeats: Act Storybeats, Scenes Storybeats, and the Scene Beats.

When not selected, the current will only display the Act Storybeats.

When only displaying the Act Storybeats you will NOT be able to re-order the Storybeats within the current view. You need to show all Storybeats in order to move them around.
The Storybeat Viewer ← → Writing an Effective Storybeat