Skipping down to the Throughlines section, this is where you get a broad overview of your story's structure. This section provides four key Storypoints crucial towards developing a great story. 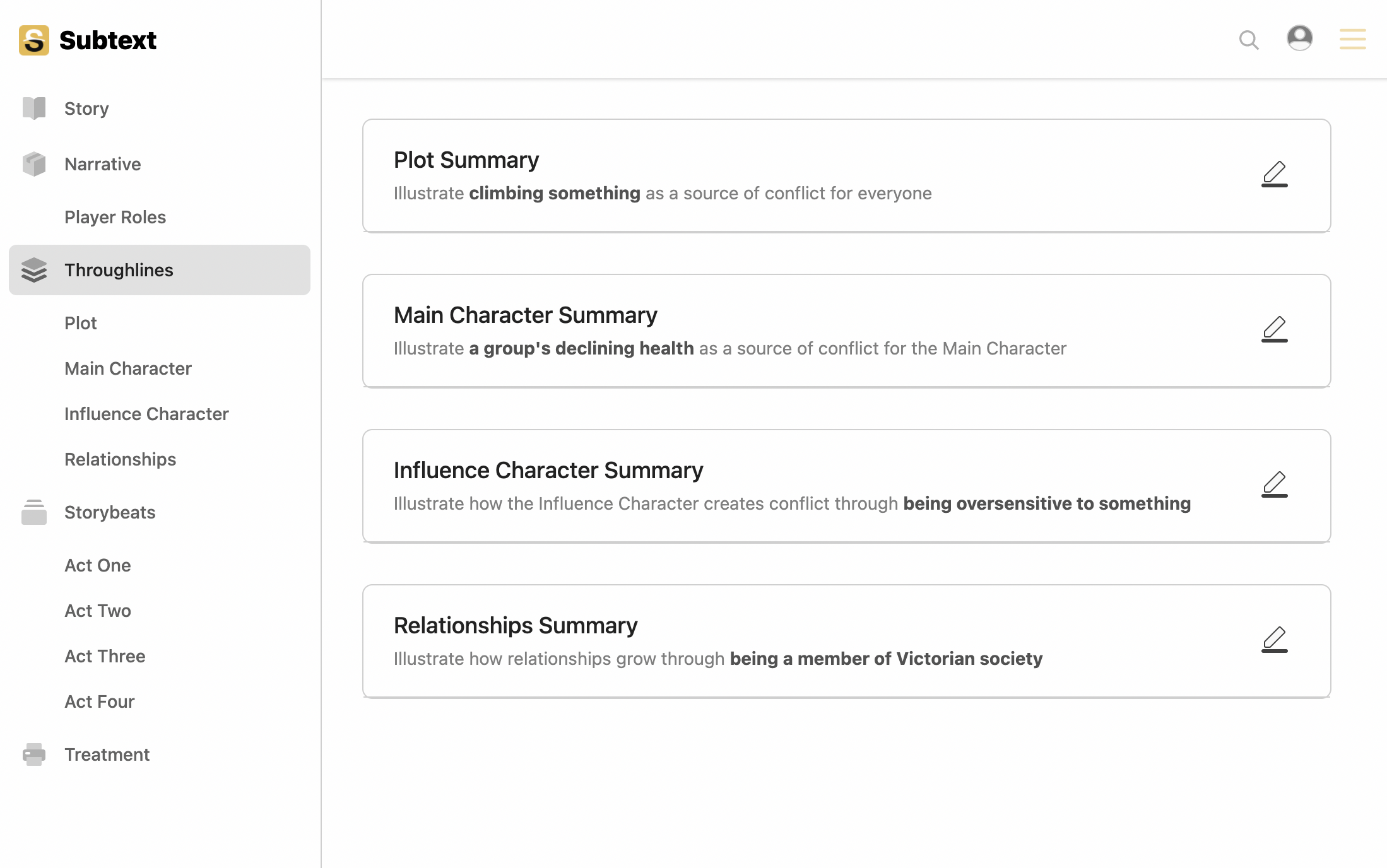 The Throughlines View in Subtxt

In practical terms, the way these Four Throughlines work in a story is:

At the heart of every complete story is a single inequity. This inequity is indescribable—if it were, we wouldn't need to go through the trouble of writing a story about it. Instead, we talk around inequity by taking four distinct points-of-view. By illustrating what the inequity looks like from these different perspectives, we communicate the essence of our story, and we lay the foundation for a meaningful Premise.

When asked to "Illustrate a Source of Conflict" for one of these Throughlines, you want to make sure you're not merely rewriting the Storypoint. In other words, if Subtxt asks, "Illustrate achieving or possessing something as a source of conflict for everyone," don't write:

If you're going to do that, you might as well turn off Subtxt and go about writing your story on your own. The Subtxt process is about digging down deep into your story to find what makes it tick. As with anything, you get what you put into it; the more thought you place behind these Illustrations, the stronger and more meaningful your story.

When you do any of this work in Subtxt, you always want to go the extra distance and answer the question why this particular point appears and how it manifests within your story (i.e. how this Storypoint creates problems).

Note how this Illustration offers a springboard for your imagination. The purpose of the Subtxt process is to generate ideas. When it comes time to write the scenes for this Throughline, your future self will thank your past self for taking the time to mine the possibilities.

If you struggle to see the conflict—or inequity—behind each Storypoint, there is an approach that can help you get to the heart of the matter.

Illustrating a Source of Conflict

Conflict is more than two people wanting different things. True conflict arises in the presence of cognitive dissonance. Contradictory belief systems or ideas, when held within the same mind (your story, for example), manifest the potential for an argument.

The basic "formula" for illustrating this conflict is:

One Truism UNLESS New Context

The first half is a truth (personal, or otherwise), the second half is an alternate context that disproves the first.

Both must be mutually exclusive--their inability to exist in the same space and time is what creates the potential for justification that will eventually drive your story.

"People needing air" and "people needing artistic expression" are truths: true statements within their appointed context (the "in order to" bit).

These are not your character's truths (though some may take them on), but rather your views as an Author. This section marked Story in Subtxt is where you get in touch with what you're trying to say with your story. Splitting that intangible drive within you out into these four perspectives is the best way to become familiar with your story's driving force (and yours as well).

With the alternate context, it's not enough to write, "People need air in order to breathe, unless they want to die." Pitting wants vs. needs within the same context generates zero-conflict; the "wanting" to die is another way of saying "not needing air"—which is simply a negation of the first belief. You must provide an alternate context when creating an inequity. The alleviation of suffering through death is a context entirely separate from breathing.

When it comes to filling out these four key Storypoints, remember that you're not writing your story—you're writing about your story. This work is for you. Avoiding negations and digging deep for alternate contexts forces you to focus on the Subtxt of your story, not mere Progressive Complications that arise from the initial truth.

🧦 Progressive Complications when you see the pair of socks Emoji in Subtxt, or Narrative First, know that this is an indication that an Illustration of Conflict strays from its original intent. There's nothing wrong with progressive complications, but if you know what one sock looks like, you know the other. The Subtxt process is about outfitting your story with an entire wardrobe of choices.

When generating a Source of Conflict inequity in Subtxt, you might find it easier at first to work backwards from your storytelling into your truths.

But let’s see if we can mine buried treasure from it. We will use the basic Subtxt approach of pitting two truths with alternate contexts against each other.

That feels good. But, the storytelling overtakes the storyforming. When writing with Subtxt, you want to peel back the layers to find universal truths.

Those two truths, taking control and giving up ownership sound like the basis for a strong narrative conflict.

The second is simply a negation of the first. You’re either taking control, or giving up control—forward or backward. No inequity exists between them because each references the same context (control). No inequity, no potential: no motivation for conflict.

🧦 The “giving up ownership” is a mere Progressive Complication of the first.

What would be an alternate context, mutually exclusive from control, that would create an inequity?

Well, wait—now I don’t know which way to go. Do I claim things in order to be able do what I want? Or, will recognizing I don’t lack anything bring me greater happiness??

This time we need to alter the first slightly to work better with the second we discovered.

And now we don't know which way to go and both contexts are mutually exclusive from one another.

That dilemma, that dissonance—IS the presence of an inequity.

Come up with a Source of Conflict for each Throughline. A general plot for the Objective Story, a personal conflict that is solely the Main Character, a trouble-making Influence Character perspective, and an emotional bond between the two that focus on their relationship's growth.

Make sure you capture the indicated Source of Conflict in your Illustration. The emphasized text in each prompt carries a significant meaning key to the integrity of your story. If you stray too far from the original intent of the Storypoint, you risk the manufacturing of a hole in your story.

:::expert Advanced Story Theory For those writers knowledgeable with the Dramatica theory of story, these four Storypoints found in the Story section are the Concerns of each Throughline.

We initially set these to the Domains but found they were too general given Subtxt's plot-oriented methodologies. As the Concerns imply the Domains they sit under, feel free to use this space to illustrate both Storypoints.

Access to the specific instances of Domains can be found in the Storyform section. :::

Anytime you see the Question Mark icon next to a Storypoint, know that help figuring out these concepts is just a click away.

In the case of the Four Throughlines, tapping on help opens the Source of Conflict Examples menu. Here, you will find professionally curated illustrations of the same Storypoint as found in finished works of art (film, television, novels, and plays). While every story contains the same set of Storypoints, they don't carry the same kind of Storypoints—which is why you'll see varying amounts of examples given a certain Storypoint and context.

:::tip We update Subtxt with new examples every week. If you come across a Storypoint without an example and would like one, please contact us, and we will send you the appropriate information. :::

Chances are, you might come across an illustration that would be perfect for your story. If that happens, tap the Copy Illustration button, and Subtxt will insert the example directly into your story.

Don't worry about copying. For one thing, nobody's looking—and for another, an illustration of a Source of Conflict is so far removed from the final product that it's more about the inspiration than the specific example. Change the names, change the locales, and move on with the development of your story.

The Essence of the Storypoint

One last thing. When writing an illustration of inequity, focus on capturing the essence of the Storypoint. Don’t get so carried away with creating compelling and interesting truths that you forget they exist within a specific instance of narrative storytelling. With the examples above, the Storypoint referenced “achieving, or possessing something” (Obtaining):

Note that both sides of the illustration (in either side of UNLESS) refer directly to possession (gaining and recognition). While you can find a reasonable amount of success referring to the Storypoint indirectly (only one side covering possession), know that your illustration will be stronger when both sides resonate with a shared dissonance of appreciation.