InstantScenes allow you to conjure up a complete Dramatic Unit at the touch of a button. Choose any Method from within the Dramatica Table of Story Elements, and Subtxt automatically generates a brand new dramatic sequence for you--ready for you to jump in, and start writing!

Let's say you wanted to write a short story exploring the issue of Responsibility. Tap on the Search Icon at the top of the page (or hit the Cmd + K to pop open the Searchbox), type in Responsibility and select the Method from the search results.

Instantly, Subtxt presents you a set of four dramatic elements that tell the story of Responsibility: 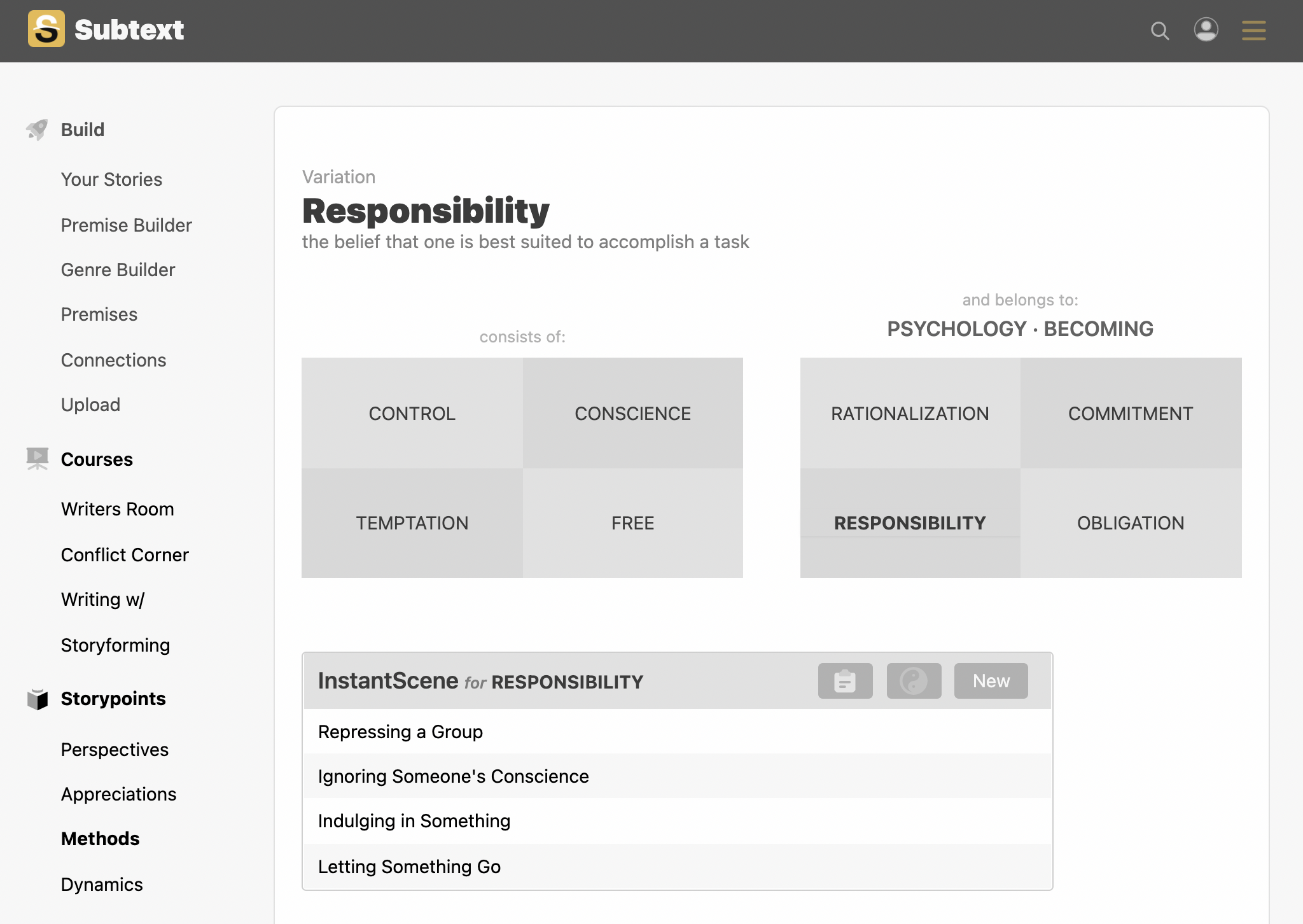 The scene starts out with a group of people repressing some people...the characters then makes matters worse by rebelling and ignoring their conscience...which leads to them indulging in behavior they never would have before--which then brings them to a place where they can let go of all those rules and the idea of certain responsibilities. This short dramatic scene is about a group of characters who take responsibility for their own life and let go of the group and ideas maintaining control over them.

If, for some reason, you don't directly connect with Subtxt's first InstantScene, tap on the New button to generate a new one. Subtxt generates a brand new set of scene events, all maintaining that same controlling thematic issue of Responsibility:

In this new version, your characters purposefully work to keep themselves under control, abstain from someone (their loved ones?) for fear of consequences. This restraint actually drives them towards being tempted by a group of people--which then leads them to being free spirits--the complete opposite of what they started out to do! Another take on Responsibility, but nevertheless just as impactful.

And if you don't want to re-generate all of the Storybeats, simply tap on the one you want to change, and Subtxt swaps one Method out for another:

Acting righteously instead of abstaning for fear of consequences takes the story in a new and exciting direction. They still set out to restrain themselves, but then find that by acting righteously they seem to attract more and more attention from others. This again leads to falling into temptation and then becoming ultimately free--but it was less about fear and more about gaining interested partners through their confident and aloof attitude. Acting righteously took us down a different path, yet maintained the structural integrity with the other Storybeats--all while focusing on the thematic topic of Responsibility.

If you've ever heard of scenes needing to turn, or the concept of positive or negative charges flipping from one scene to the next, the InstantScenes in Subtxt show you WHY this is a thing. That notion that things change is really just the comparison of the first Element in a Dramatic Unit to the last. Note how they're opposites--that's totally on purpose and why a scene feels like it turns.

The Holistic Way of Doing Things

That pattern of running through a quad from the upper-left to the lower right by means of a "Z" pattern is specific to a Linear mindset. Stories are 50/50 when it comes to structure--half are structure around Reason through a Linear mindset. The other half look to Relationships as preferred within the Holistic mindset.

If you want to structure a scene around Relationships, simply tap the Holistic button just to the left of the New button (the Yin-Yang symbol). Tap that and Subtxt swaps the last two items in the quad. This circular pattern around the quad is endemic to Holistic thinking. Note the difference between the previous progression and this new one:

They still set out to restrain themselves. And the righteous behavior follows--which then gives them a feeling of freedom--like nothing can touch them...which would then open themselves up to being tempted...or tempting towards others. It's a never-ending downward spiral of justification and manipulated relationships...perfect for a story structured around Holistic thinking.

Subtxt is not the place to do your writing. There are a million different apps that take care of that part of the process.

If you find yourself wanting to grab an InstantScene to take with you into another app, simply tap the Clipboard button just to the left of the of the Holistic and New buttons. Subtxt will copy the Method (main thematic issue) and the four Storybeats into your clipboard--ready for pasting into your favorite writing program. 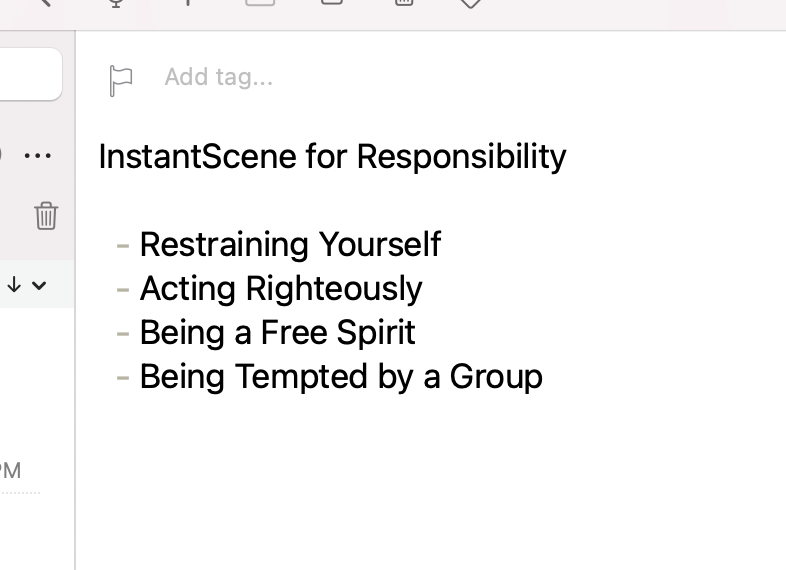 The InstantScene is perfect for those short stories, or mini-episodes you want to churn out on a regular basis. It's the perfect antidote for "writer's block," and a great inspiration to keep you in the flow of writing your story.

For you power-Dramatica users, you can use the InstantScene to breakdown the Sequences found in your Plot Sequence Report. No longer do you have wonder what Truth looks like while Understanding, simply search for Truth and quickly generate a scene that fits perfectly into your story.
Storypoints ← → Illustrations