Subtxt separates the Subtext of a Storypoint from Storytelling. Storytelling is how the Storypoint appears in your story, and it's what your Audience will see or read or hear. Subtext is what drives this Storypoint behind the scenes and is for you, the Author, to better understand the Storypoint in context of the current narrative.

There is nothing wrong with either approach, and which one you select is up to your preference.

The example below is a story built from Aliens. The Pivotal Element in that film for the Main Character (Ripley) is desire. To re-create one that might look like for someone trying to write the same movie, the General Illustration was set to "fearing something," and the follow-up Story-specific Illustration to "fearing monsters." 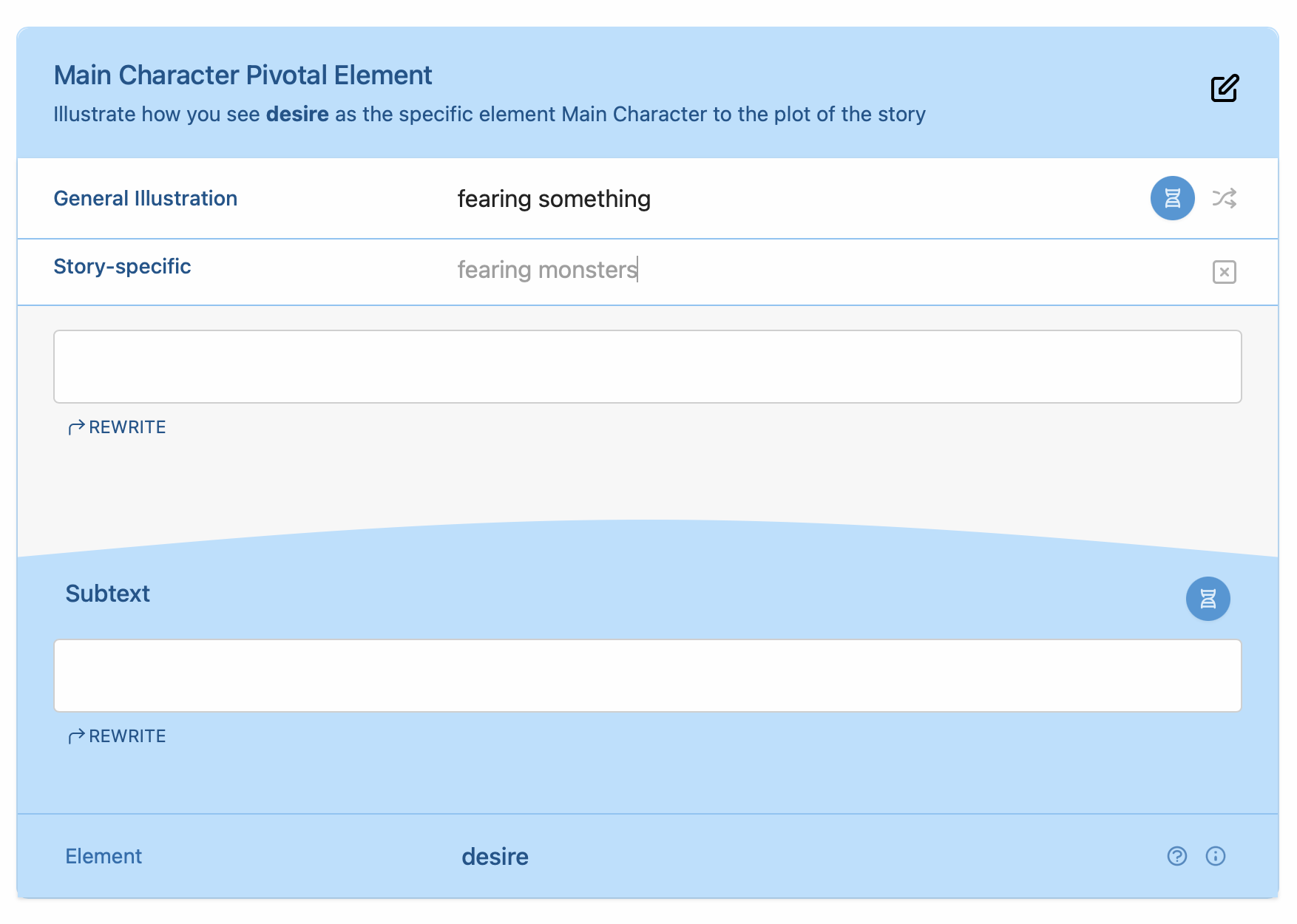 Setting the Illustrations of a Storypoint

The Player name was also set to "Riley," rather than Ripley in order to avoid any biased responses from the AI (as it would likely just copy and paste storytelling from the actual movie).

Once set, we tap the Storytelling AI button at the top of the Storypoint card to request a set of varied responses. 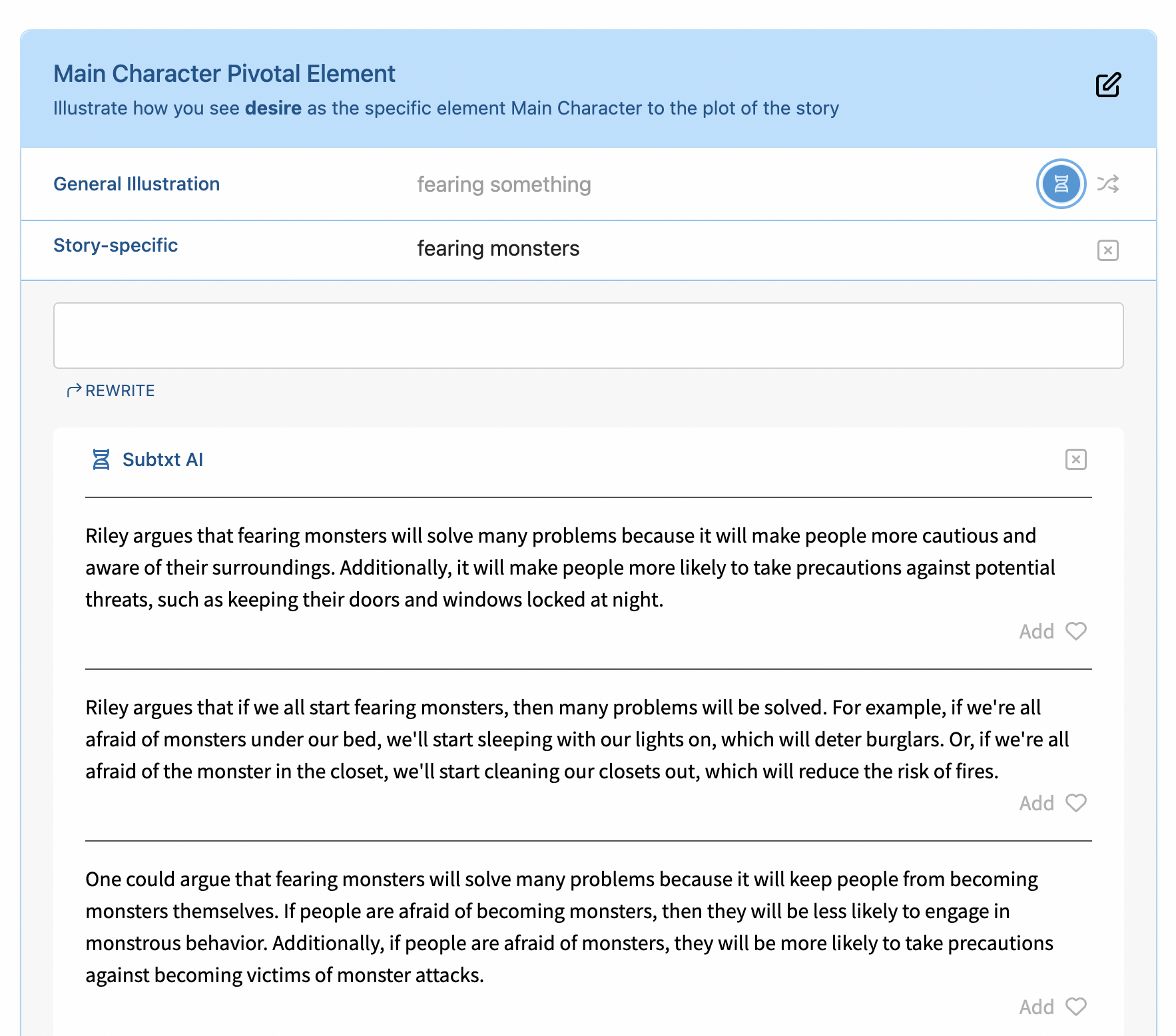 An Example of Subtxt Generating Storytelling

Scanning the response, several of the options would work well for a story about someone Riley "fearing monsters." To add one selection to Storytelling, tap the "Add" button (with the heart) and Subtxt automatically copies the information into the proper location. 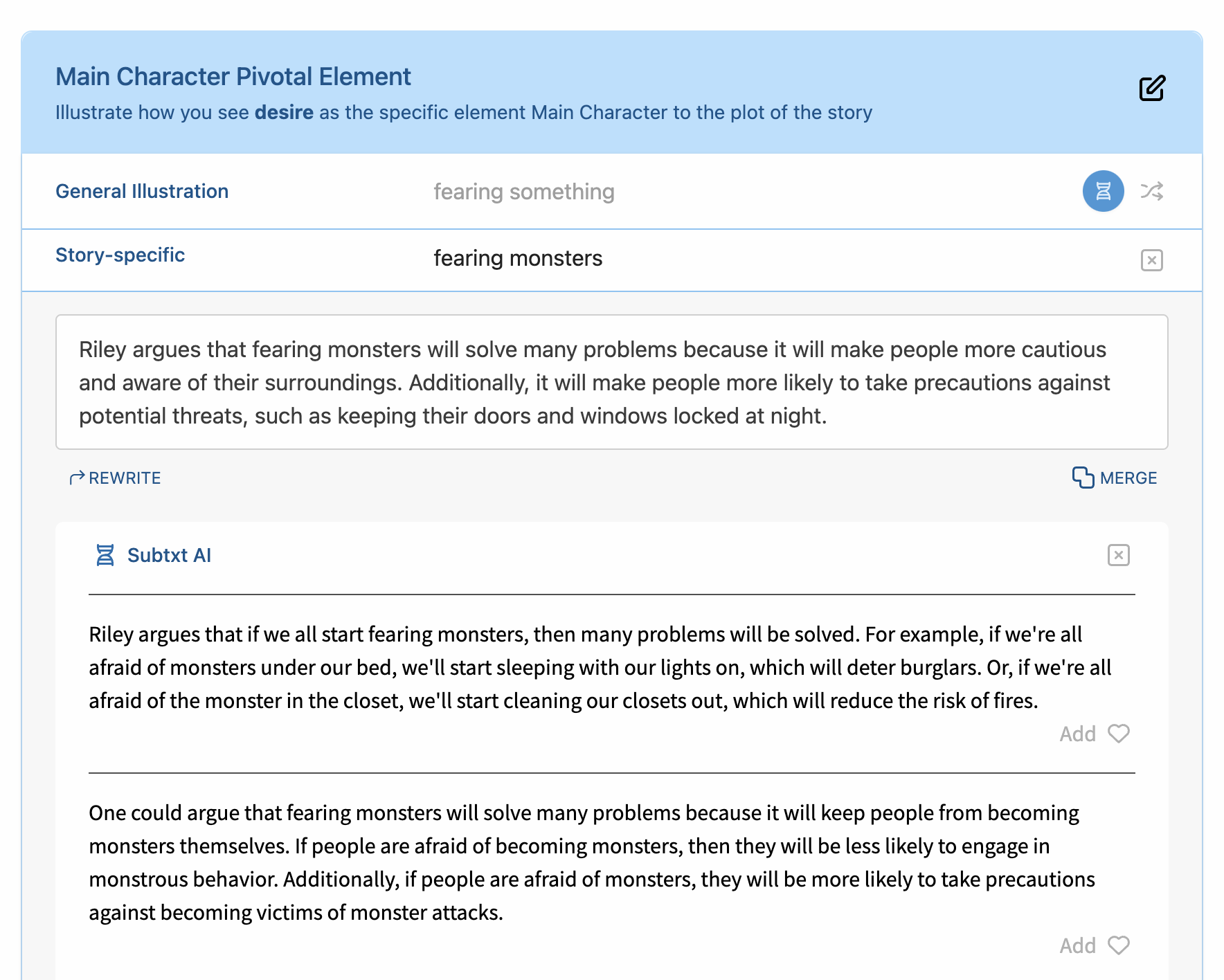 Adding an AI Response to Storytelling

From here, you could move on to the next Storypoint confident with the knowledge that this particular area of the narrative has been effectively illustrated.

If something deeper and more in-depth is wanted, scroll down to the Subtext section located beneath the Storytelling.

To ask Subtxt to help explain the meaning behind this particular Storypoint, without all the Storytelling, tap the Subtext AI button located within the Subtext section of the Storypoint. 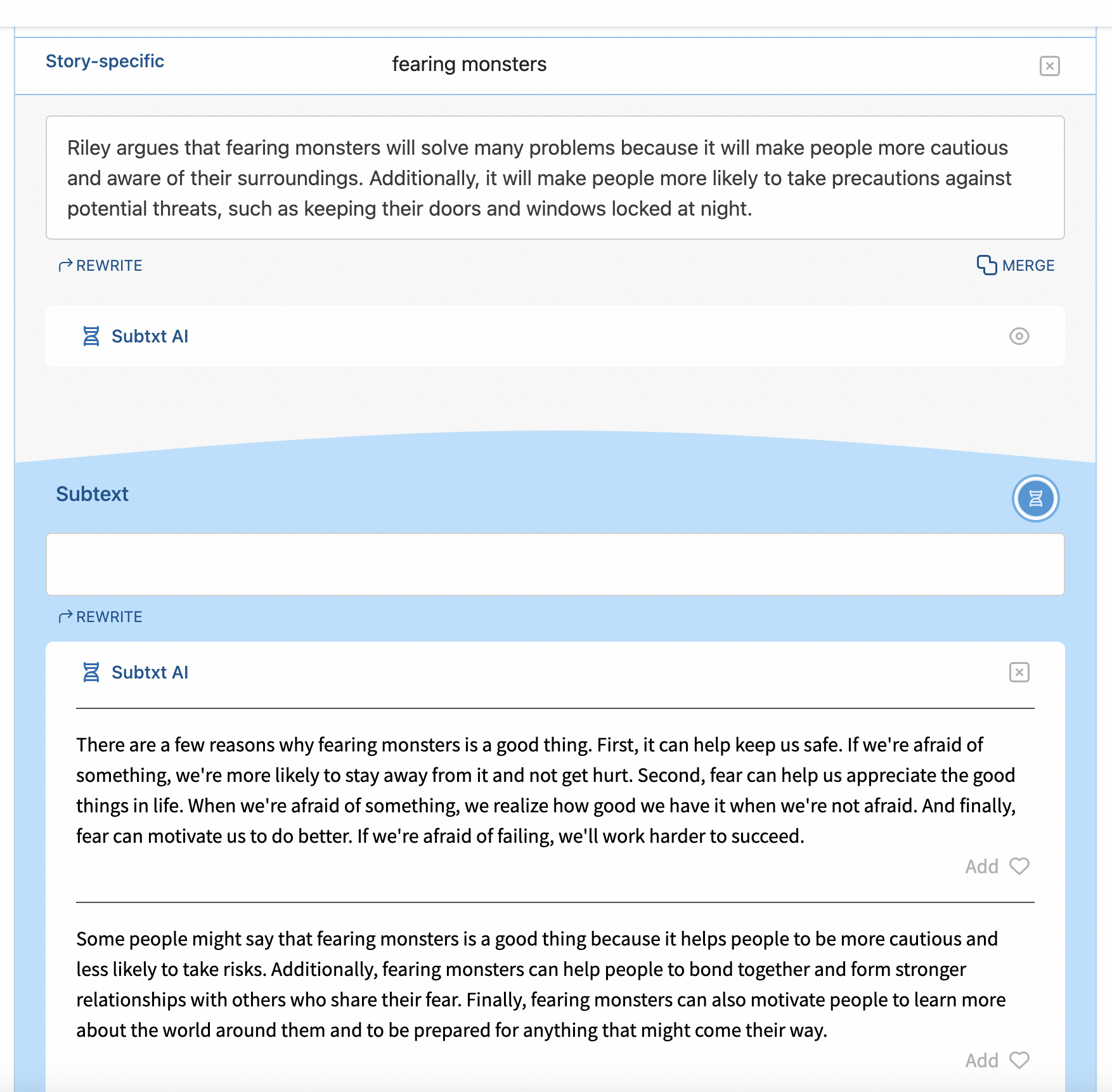 An Example of Subtxt Generating Subtext

Note the objective nature of the Subtext compared to the more "colorful" nature of the Storytelling. Mixing the specifics of a story with the nature of a Storypoint can sometimes blur the line too much between substance and source.

Selecting a Subtext response by tapping the Add button adds it to the Subtext section of the Storypoint. 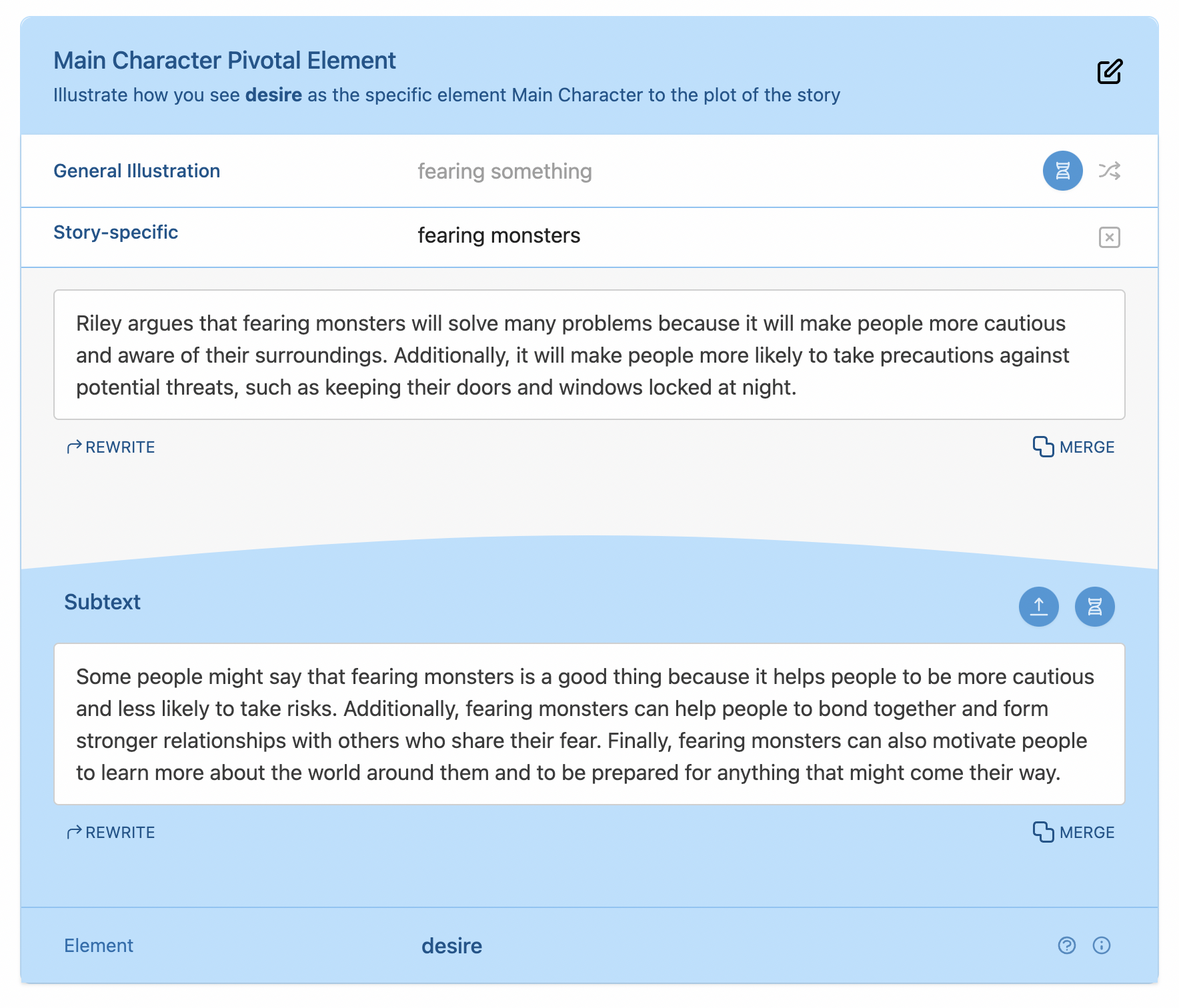 Adding an AI Response to Subtext

Note too, the "up arrow" that now appears next to the Subtext AI button. This is the Surface Storytelling option available in all Storypoints. Tapping this button directs Subtxt to generate Storytelling from the Subtext. 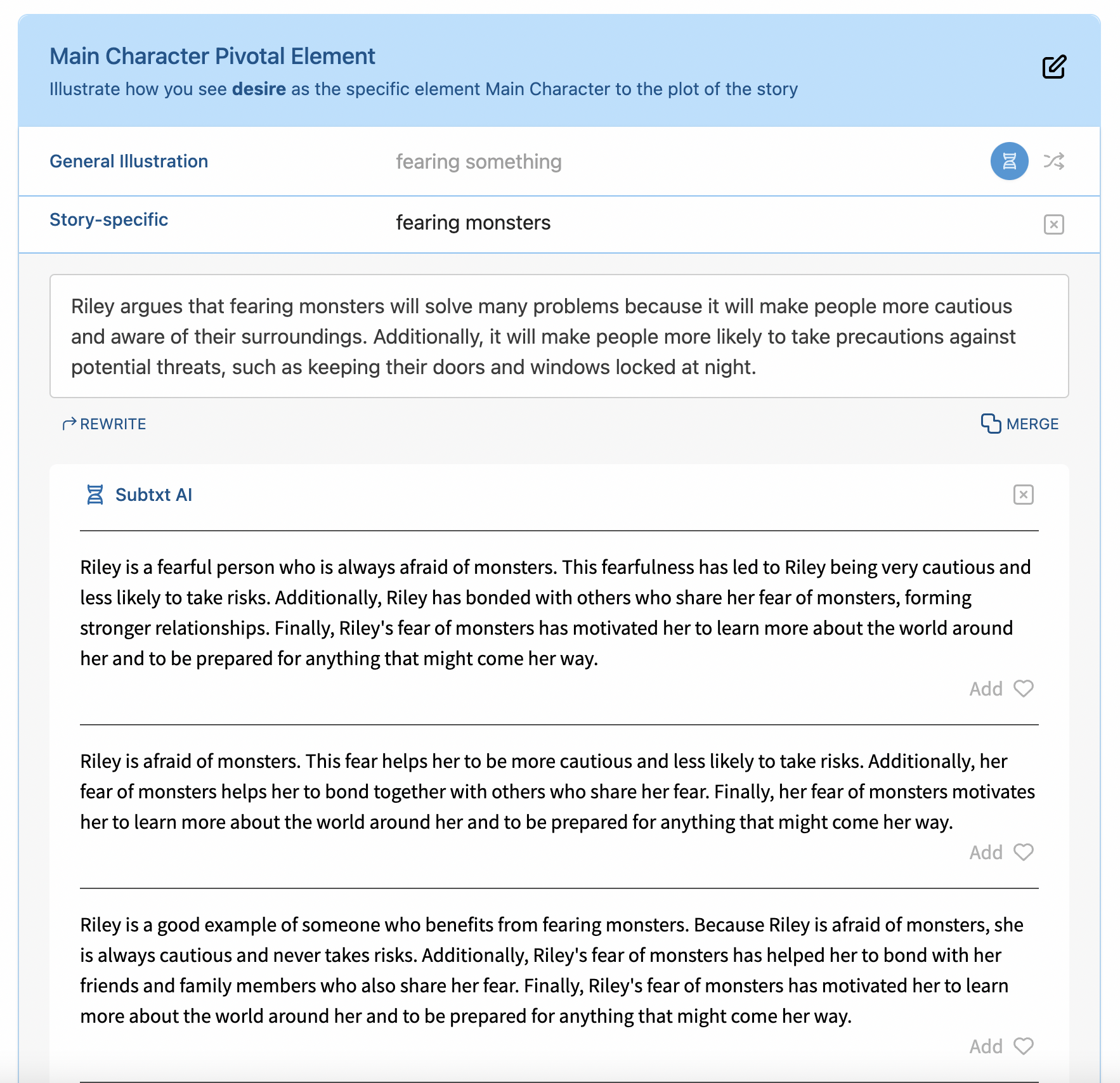 Note the difference between these results, and the first example of results from simply tapping the Storytelling AI button. The responses are quite similar, but a bit more in-depth than the first go-round.

To take advantage of both responses, tap the Add button to combine the Subtext AI response with the Storytelling AI response. 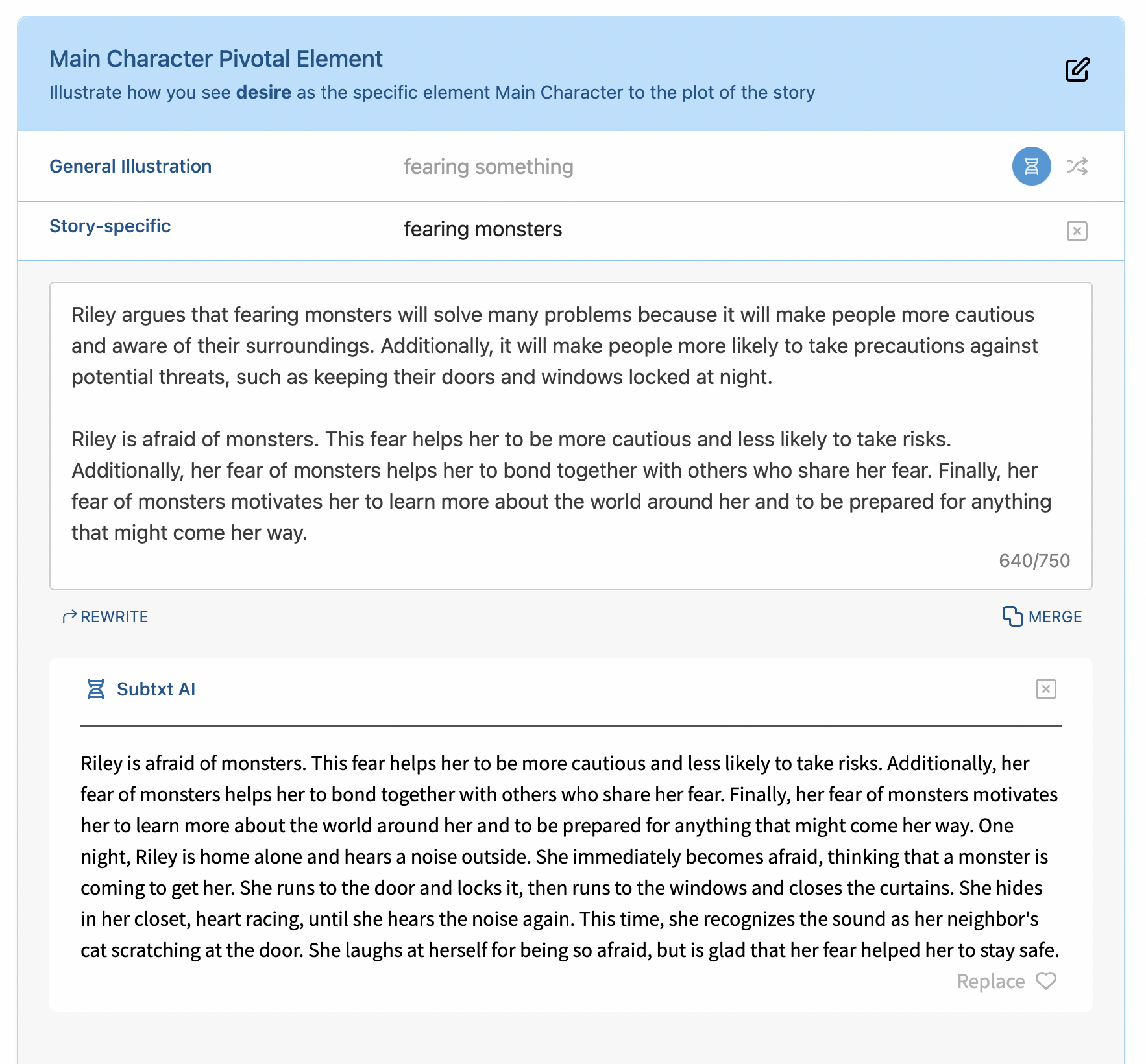 Adding a Subtext Response to Storytelling

Once added, you can now merge the two response together into one by tapping the Merge button located at the bottom right-hand corner of the Storytelling. 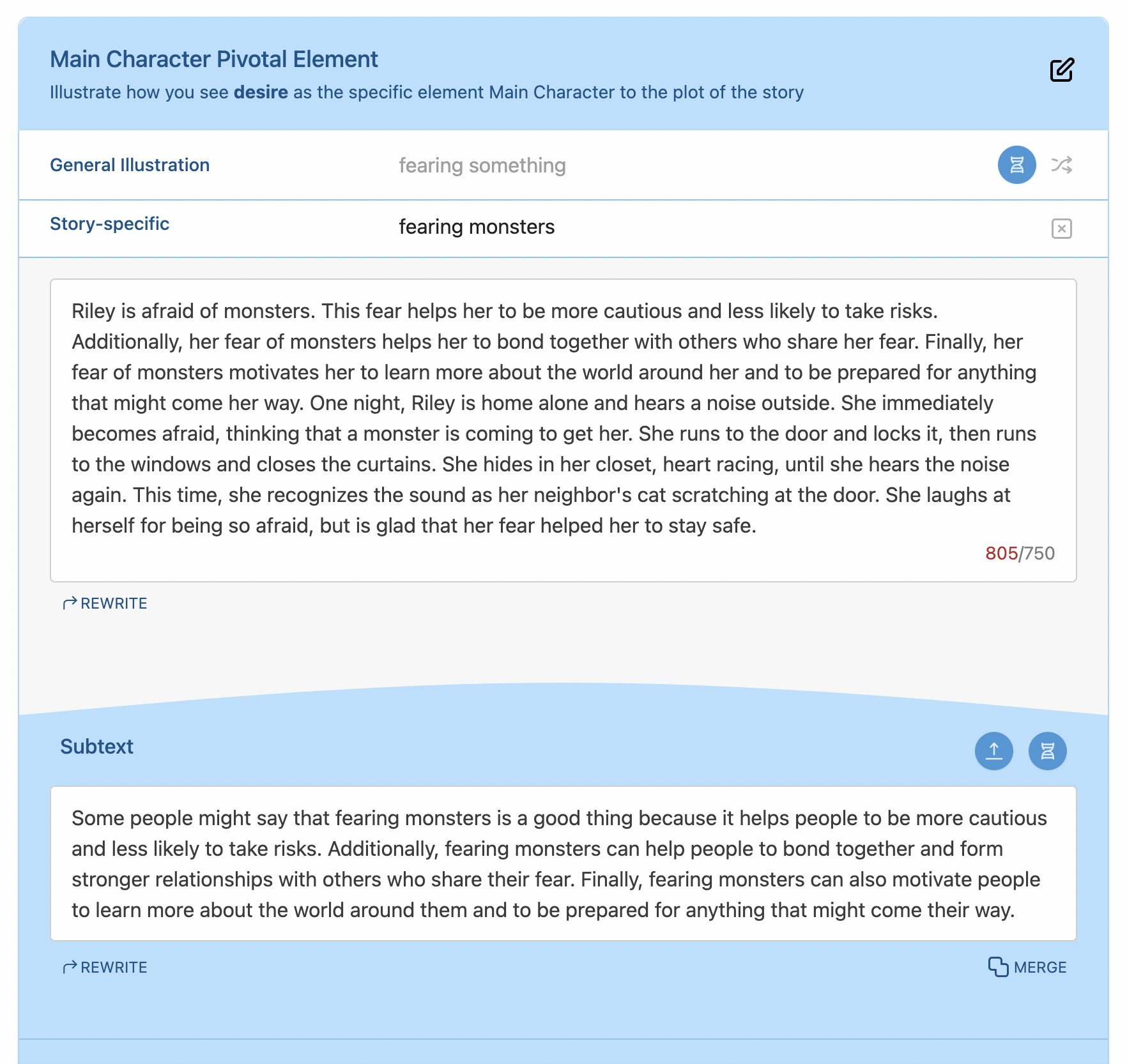 Subtxt takes the best of both ideas and combines them into one.

Note the red number just above the Merge button. This red number is the Over Limit indicator. While Subtxt will save any illustrations beyond the limit, it will NOT use them to generate further AI response with other Storypoints.

It's best to keep your illustrations brief and specific in Subtxt. The clearer you can be, the better your story will flow.

Editing the Storytelling to bring it in under the limit helps in clarifying how this Storypoint will play out in your narrative. 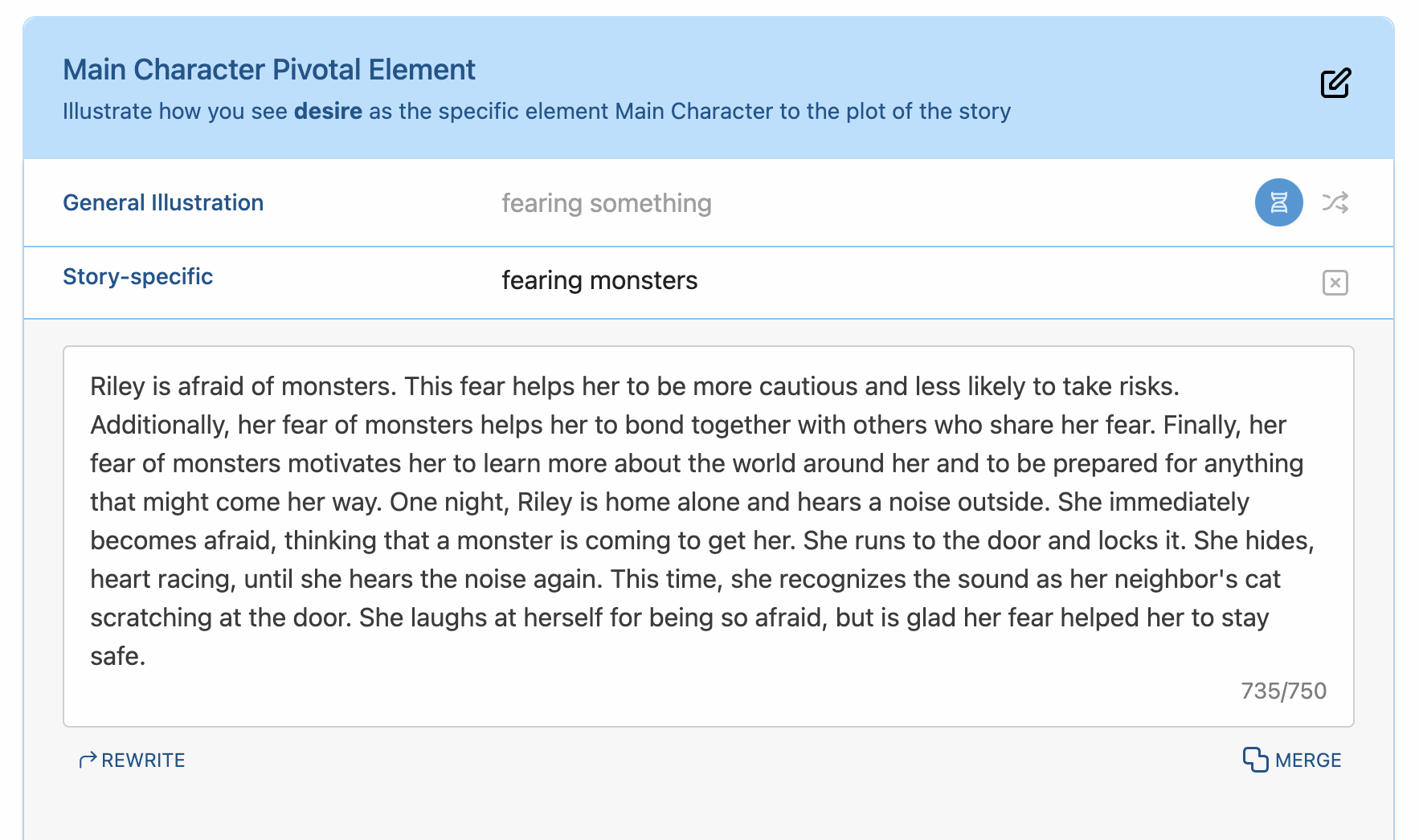 Bringing Storytelling in Under the Limit

Here is the completed Storypoint example with both Storytelling and Subtext in place. 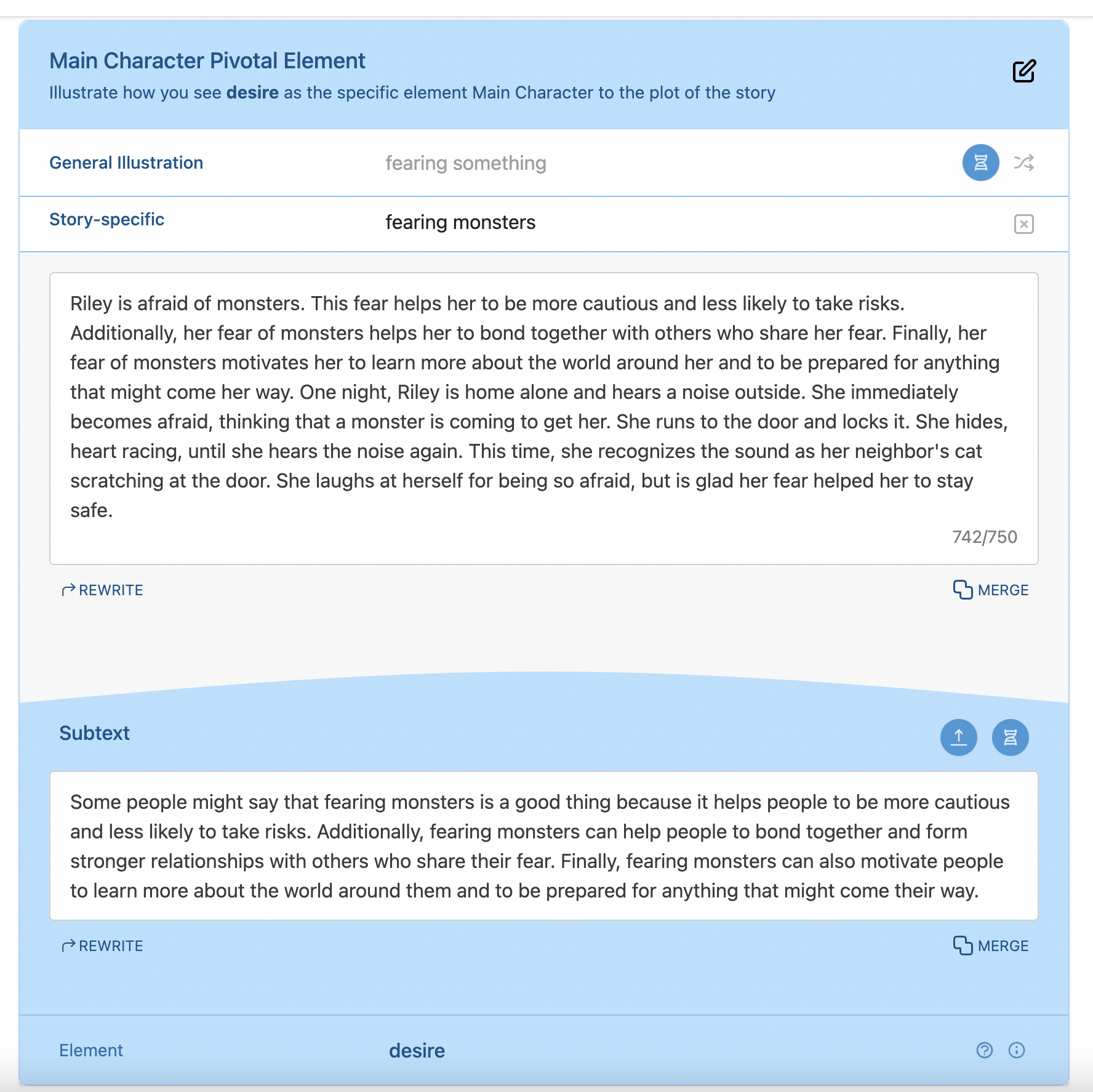 A Completed Storypoint with both Subtext and Storytelling

Once finished, you can move on to any other Storypoint and repeat the same process.

The example below is for an imaginary Obstacle Character for Riley to argue with in our story. Named "Nelly" to once again avoid any confirmation bias, the results from the AI are uncanny when compared to the finished film. 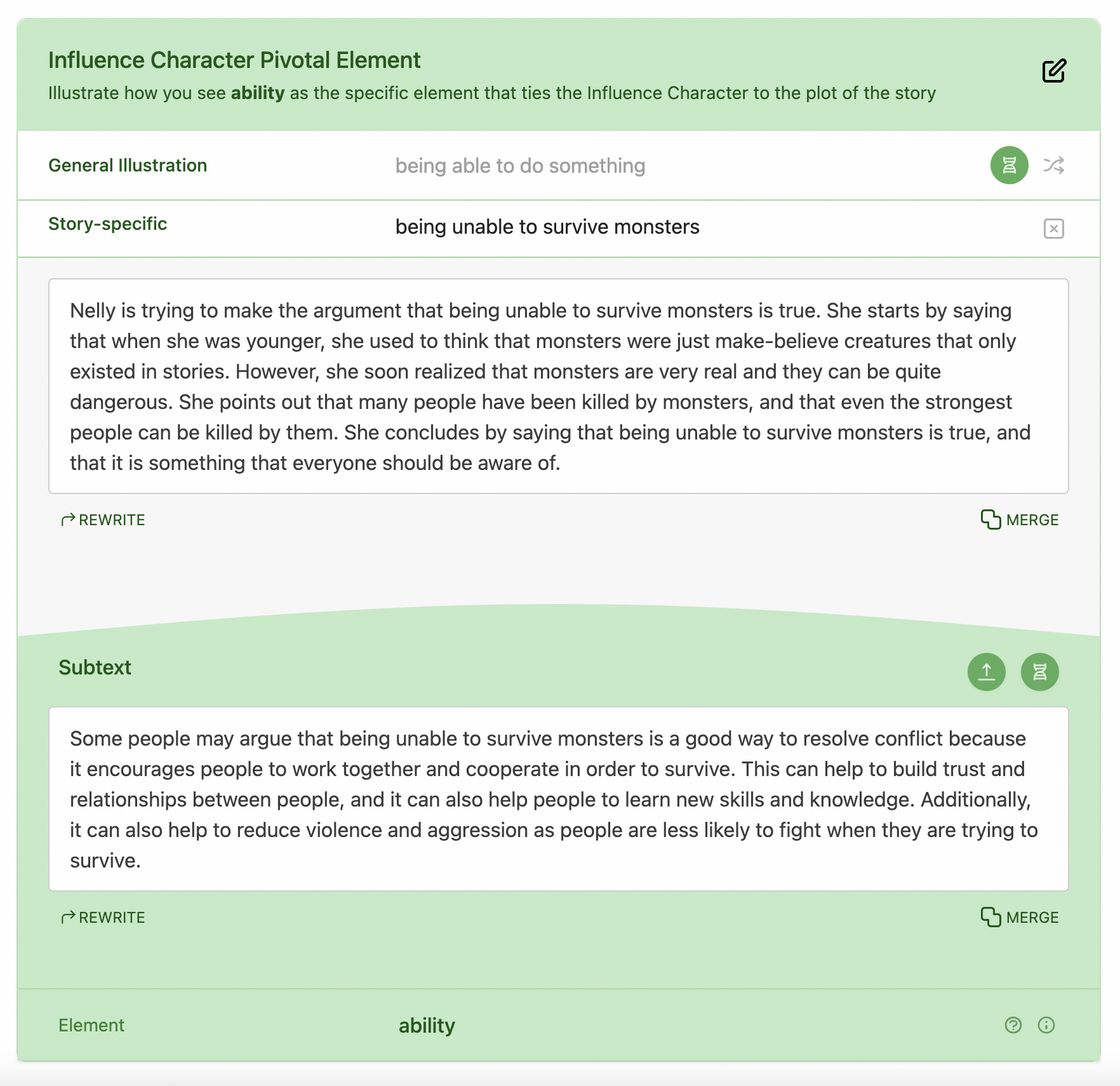 The Parts of a Storypoint ← → Explanations & Examples for Storypoints