As with astrology and its idea of planets exhibiting certain properties within the context of alternating Zodiac signs, or the Mayan calendar and its concept of resonances between the thirteen galactic tones of the moon and the twenty solar seals of the Sun, so too do the Storybeats of a complete narrative resonate with the shifting aspects of the mind.

Self Interest Appearing as an Activity

Self Interest Appearing as a Mentality

The combination of both the static appreciation of Thematic issues alongside the experiential nature of vibration and frequency offers a complete understanding of narrative for both Author and Audience.

In short, the Premise, or argument, of a narrative sets the progression of a mind as it encounters inequity. The Tonal Aspects of a specific Storybeat determine the resonate frequency of that progression as it cycles through the Thematic considerations of the mind.

Tonal Aspects of a Thematic Cycle

The first and most important aspect of any Storybeat is the Material Tone. Tied to a specific scope and location within the model of the Storymind, this Tone reveals the key component of Theme in a Storybeat.

If all else fails, as long as the Author finds a way to bring this element of Theme into their Illustration, the Storybeat will resonate soundly with the rest of the narrative.

Rarely does a Storybeat resonate in isolation, or apart from other Storybeats. The Spatial Tone rings with sibling Storybeats through the analogy of an electric circuit, operating as a Dramatic Circuit:

Though seemingly distinct in presentation, the Temporal Tones of a Storybeat resonate with consistent vibration of growth. That said, there can be faint whispers as to the experience of this growth if the writer listens closely enough.

This quality of these Temporal Tones resonating as growth while simultaneously communicating the essence of a cycle can be seen in this visualization.

Illustrating Your the Thematic Cycle of a Storybeat

To help you illustrate this rather complex and powerful concept, Subtxt offers a helpful Writing Prompt for every Thematic Cycle. This question, perfectly tuned to the vibration and frequency of the Storybeat in question, should help inspire some pretty creative ideas.

In Subtxt, these Tonal Aspects are presented in a left-to-right predominance order, i.e. the first Aspects are the important to the meaning of the story, with those on the right important, but less essential.

Under most circumstances, writers would be best served by ONLY focusing on the first two Tonal aspects of a Storybeat.

The order of Tonal Aspects switches given the Mindset of a story. Linear Mindset stories see the Abstraction of a Storybeat as relatively more important, or more obvious, than the Temporal. For the Holistic Mindset, the Temporal Aspect is given precedence over the Abstraction. You'll note this reality in the order of each given the Mindset. In a Linear story, the order of Tonal Aspects for a given quad will always be Growth, Expansion, Transformation, and Transcendence. For the Holistic stories, the order of Abstraction aspects will always be Situation, Activity, Mentality, and Standpoint.

The Vibration of a Linear Storybeat

In a Linear Mindset story, the order is Material, Abstraction, Spatial, and Temporal. The Linear mind gives preference to substance and composition before even considering the placement of a consideration along a timeline. In fact, for most Linear Mindset stories that Author can forget or dial down the need to incorporate the Temporal Tone. 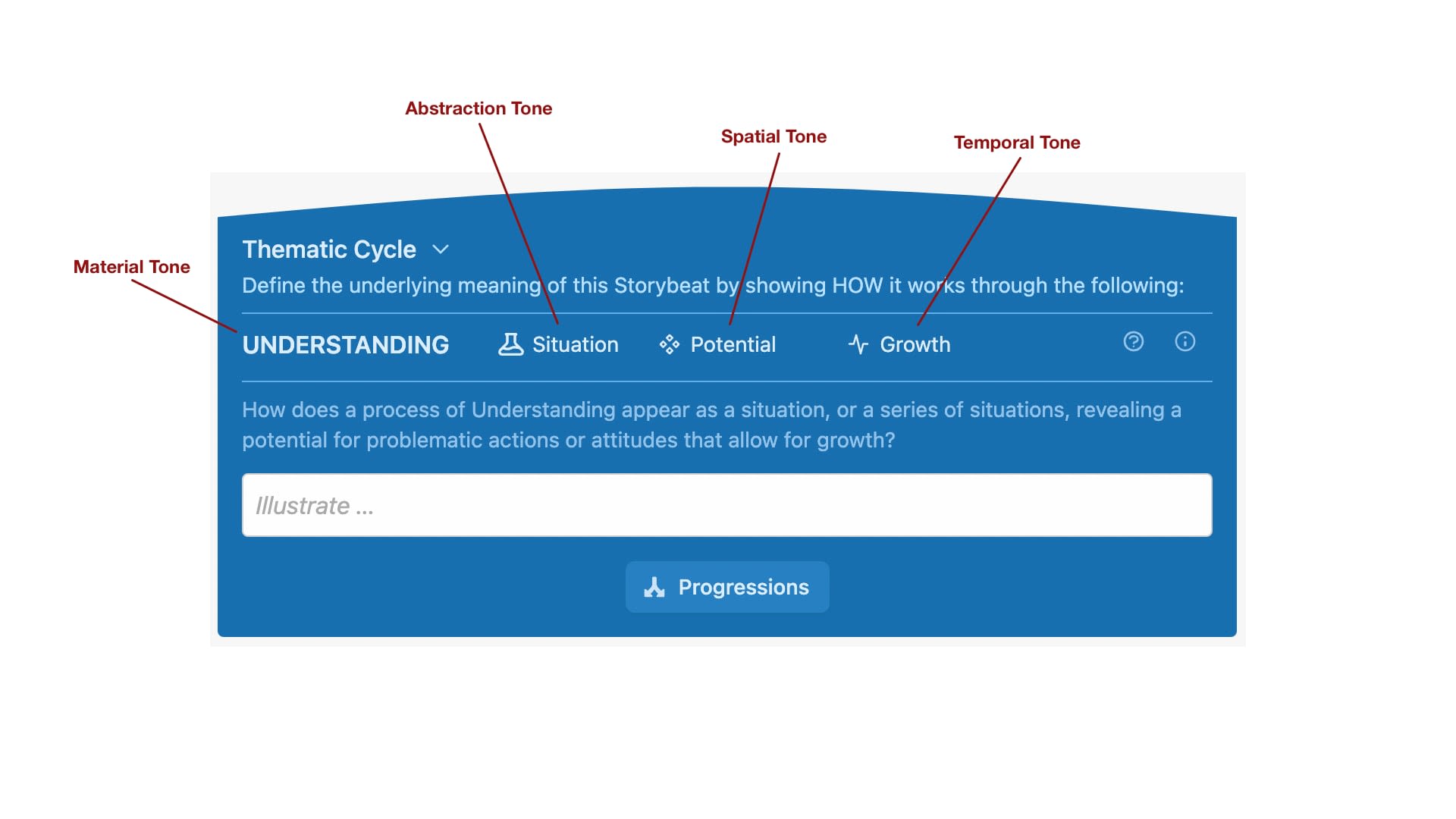 The Vibrations of a Linear Storybeat

A quick way to read both the Material and Abstraction Tones of a Storybeat in a Linear Mindset story is:

How does MATERIAL appear as ABSTRACTION?

Asking yourself this question while generating ideas for your Storybeat will ensure that your Illustrations ring true with the mind of your story.

The Vibration of a Holistic Storybeat

In a Holistic Mindset story, the order is Material, Temporal, Spatial, and Abstraction. To the Holistic, Abstraction is the least important and often most inconsequential consideration of an inequity. The Holistic can never know for sure if an Abstraction is accurate or validated, and therefore prefers the wavelike consistency of the Temporal Tones. 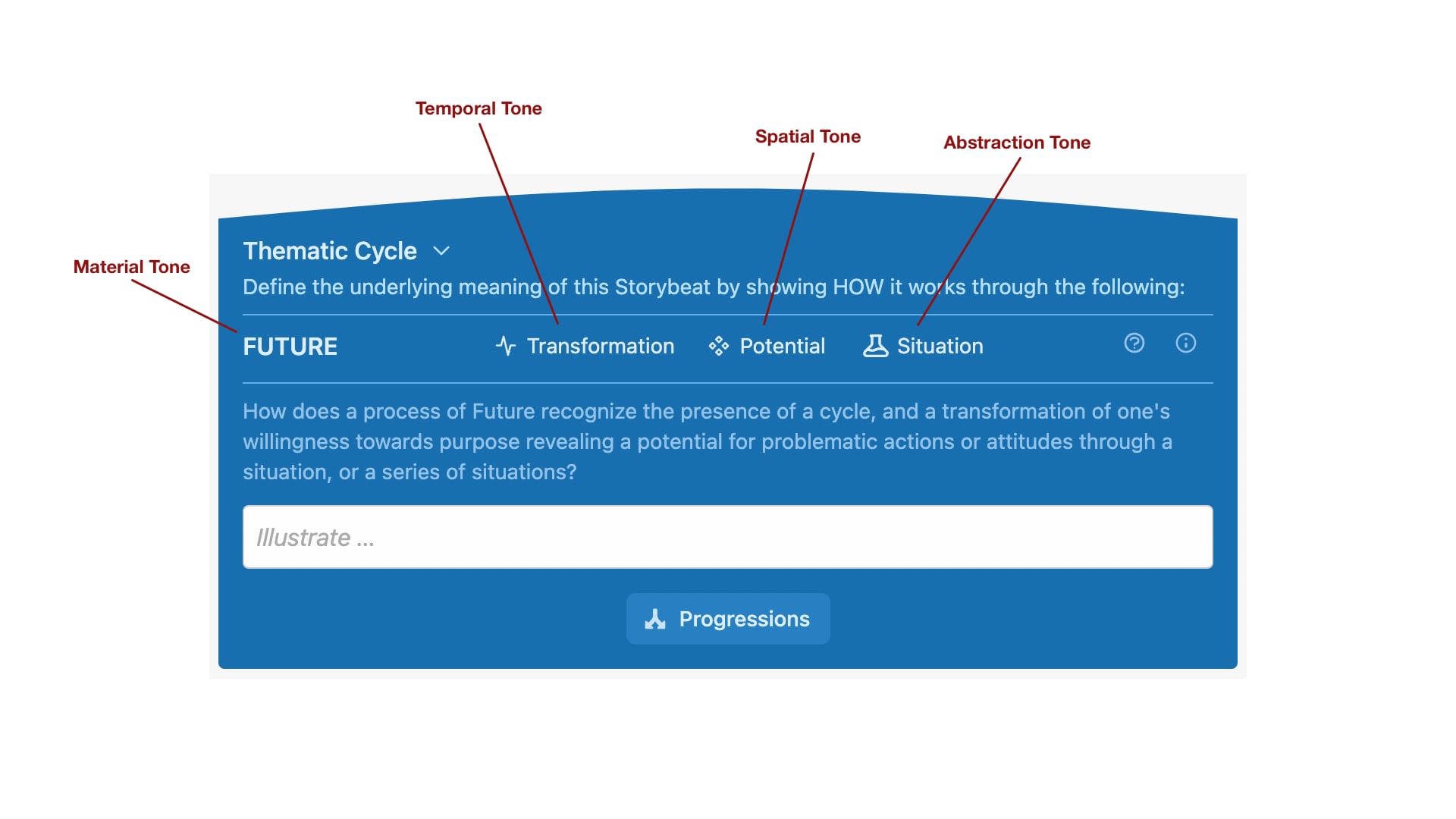 The Vibrations of a Holistic Storybeat

A quick way for the Holistic Mindset to read the Tonal Aspects of a Storybeat is:

How does MATERIAL grow through TEMPORAL?

In this way, the Author of the Holistic story accounts for that which is most important: growth for growth's sake.

The Basis of Creativity

While fascinating and hopefully inspiring when it comes to generating imaginative ideas for the individual Storybeats of your story, do not get caught up in capturing each and every Tone as if you're story depended on it.

"Life is not a problem to be solved, but a reality to be experienced." - Jacobus Johannes van der Leeuw

Allow a little mystery into your writing as you develop your story with Subtxt--this will keep the life in it.

Above all, do not obsess over writing the perfect Storybeat. These Tonal Aspects and Writing Prompts are meant to ignite and light fire to your creativity, not douse it.

The Parts of a Storybeat ← → Storybeats and Players