Every complete story is really just four or five key moments between two characters (thank you Robert Towne, screenwriter of Chinatown). The substance of the argument within these moments is what determines the entire narrative structure of your story.

Suffice it to say, once you know what those two characters are arguing about--you'll know what's supposed to happen in each and every scene.

Before determining what these two characters will argue about, you'll first want to name them.

The Main Character is that Player in your story through which the Audience experiences the story. It's not who the story is about, or who is "driving" the narrative, but rather who we assume the most empathy and first-person awareness.

The Influence Character is that other Player offering an alternative approach to managing inequity (dealing with conflict). Their position on the opposite of the spectrum is what shines a light on the Main Character's blind spot (what they are not dealing with).

Note that these two "characters" are really perspectives and as such, can be handed off from one Player to the next. While it is extremely rare to find a hand-off Main Character perspective (Stalag 17 is one example), you will often find several candidates for the Influence Character with that challenging perspective handed off between Players.

While you can manage these hand-offs later in Subtxt, choose the most appropriate one (the most influential) for the purposes of building your story's dramatic argument. 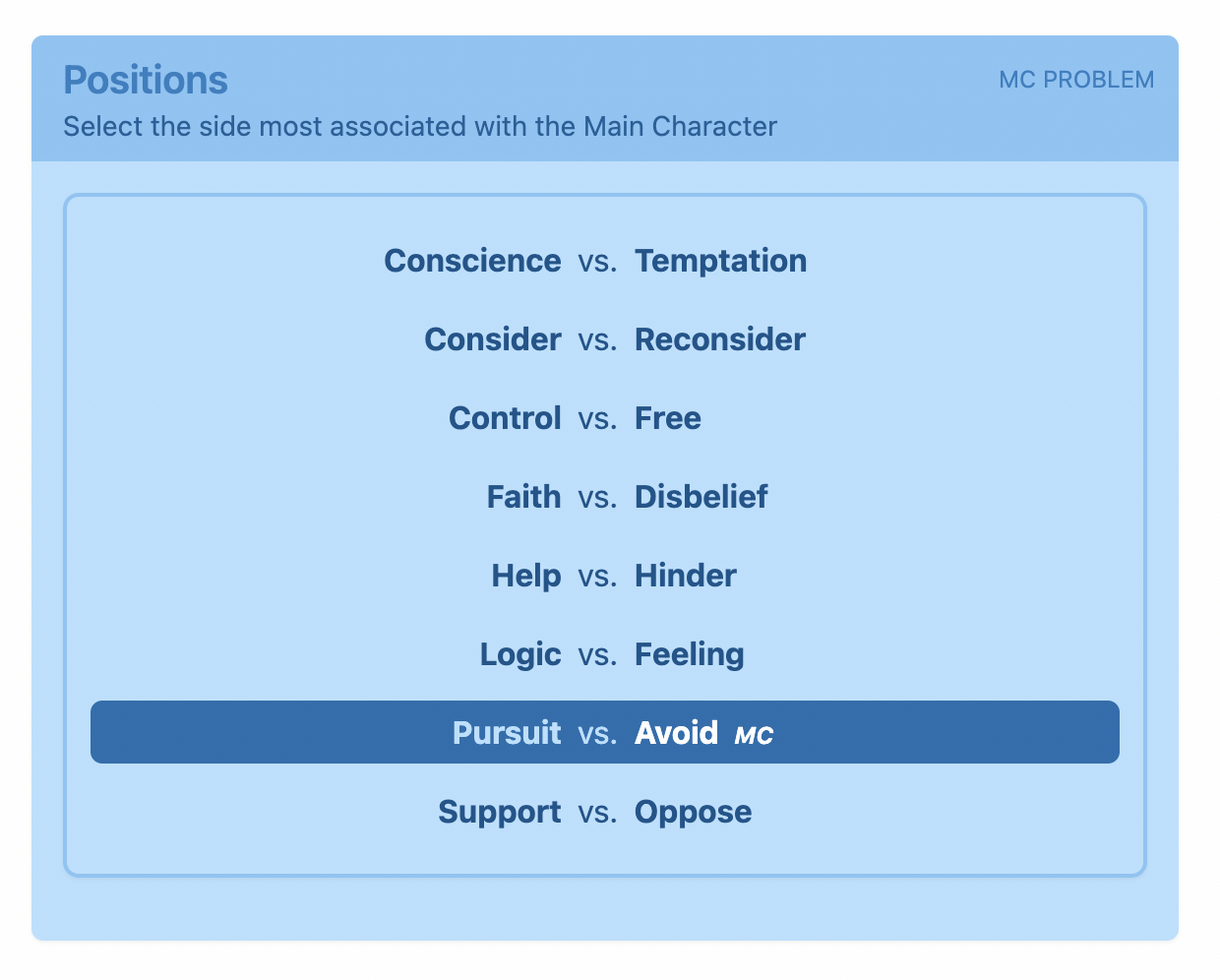 Note how the pairs reflect polar opposites of the same inequity. These pairs are meant to reflect two sides of the same coin, the yin with the yang. That's why they work so well against each other and why, if you have your Main Character and Influence Character each take a side, their argument will last an entire story. In fact, they could conceivably go on and on with this argument because both sides are similar in some respects ("You and I are both alike"), and different in others ("We're nothing alike.").

The eight pairs of Elements shown here in the Position box sync with the Narrative Family you chose above. If you don't find yourself connecting with these Elements, try a different Family and see if the Positions shown work better for the story you want to tell. 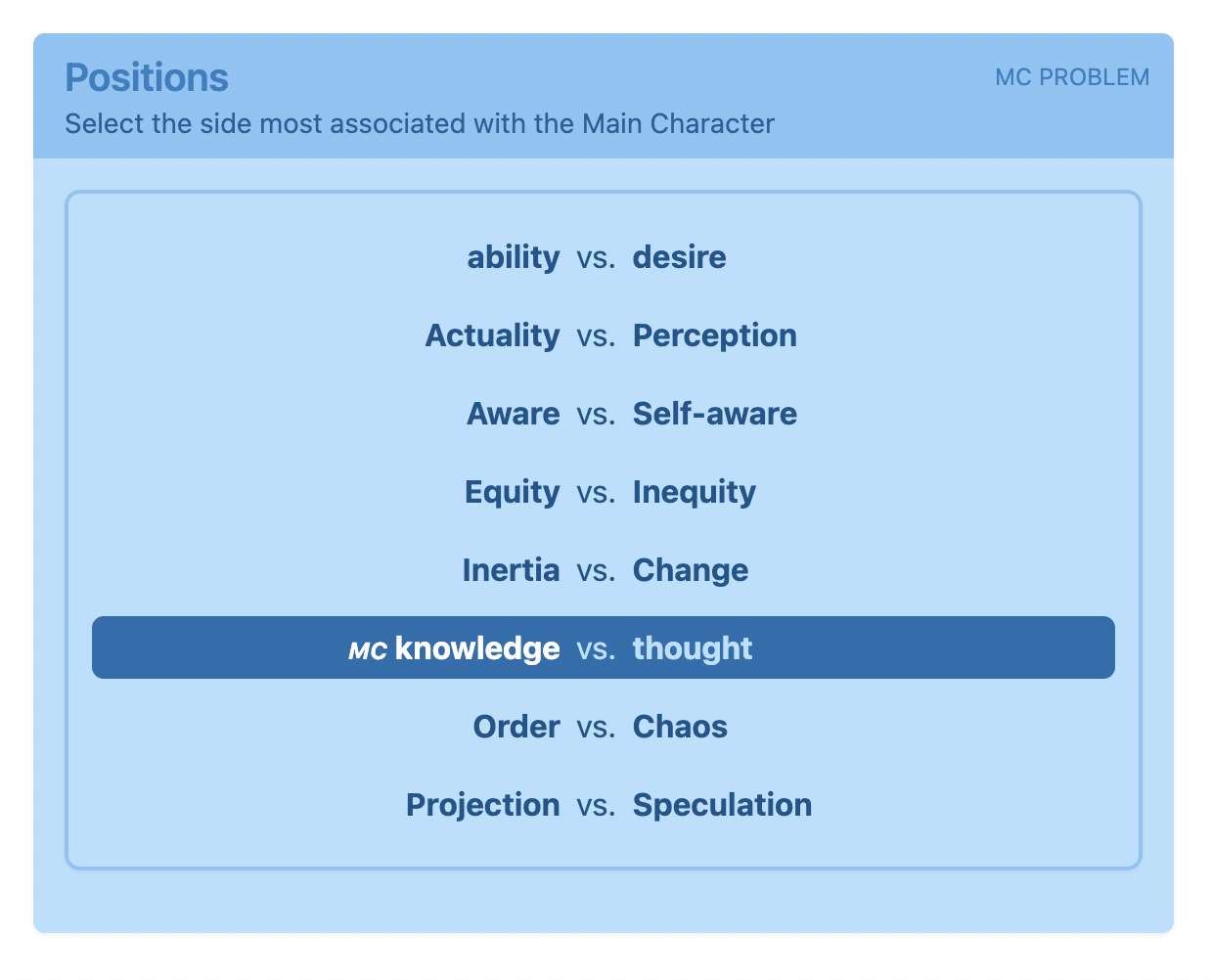 Positions Found in the Profound Family 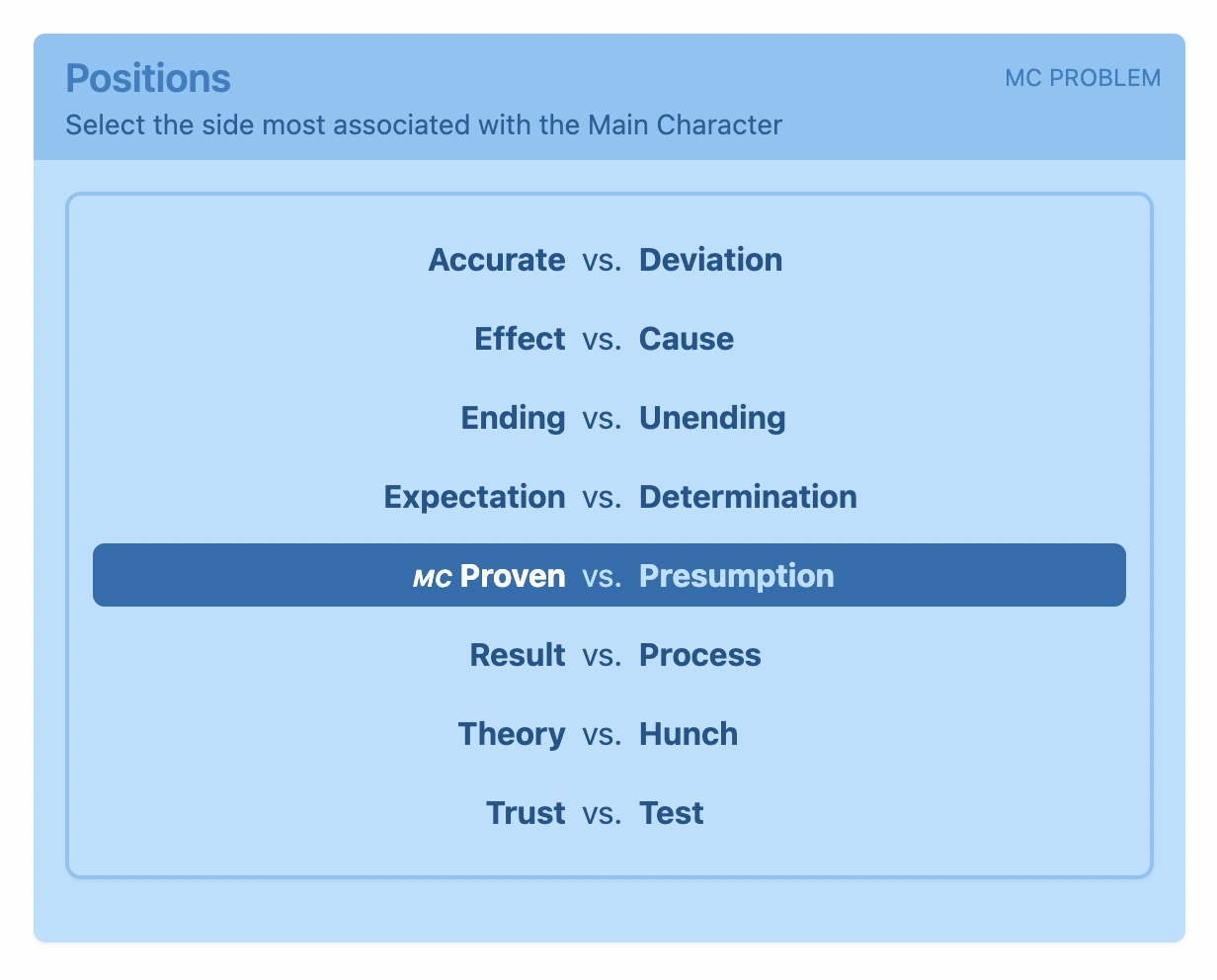 Positions Found in the Capable Family 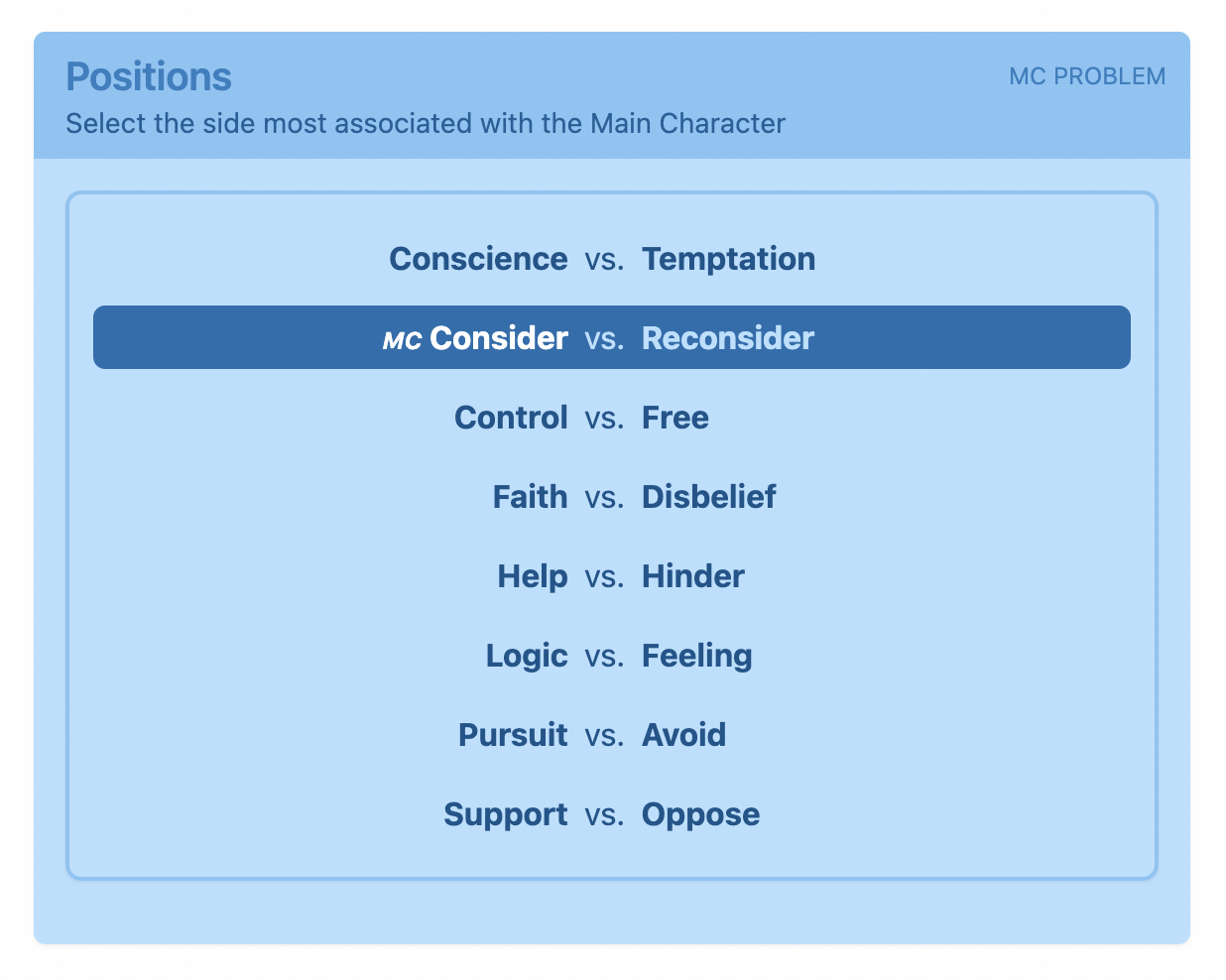 Positions Found in the Aspirational Family 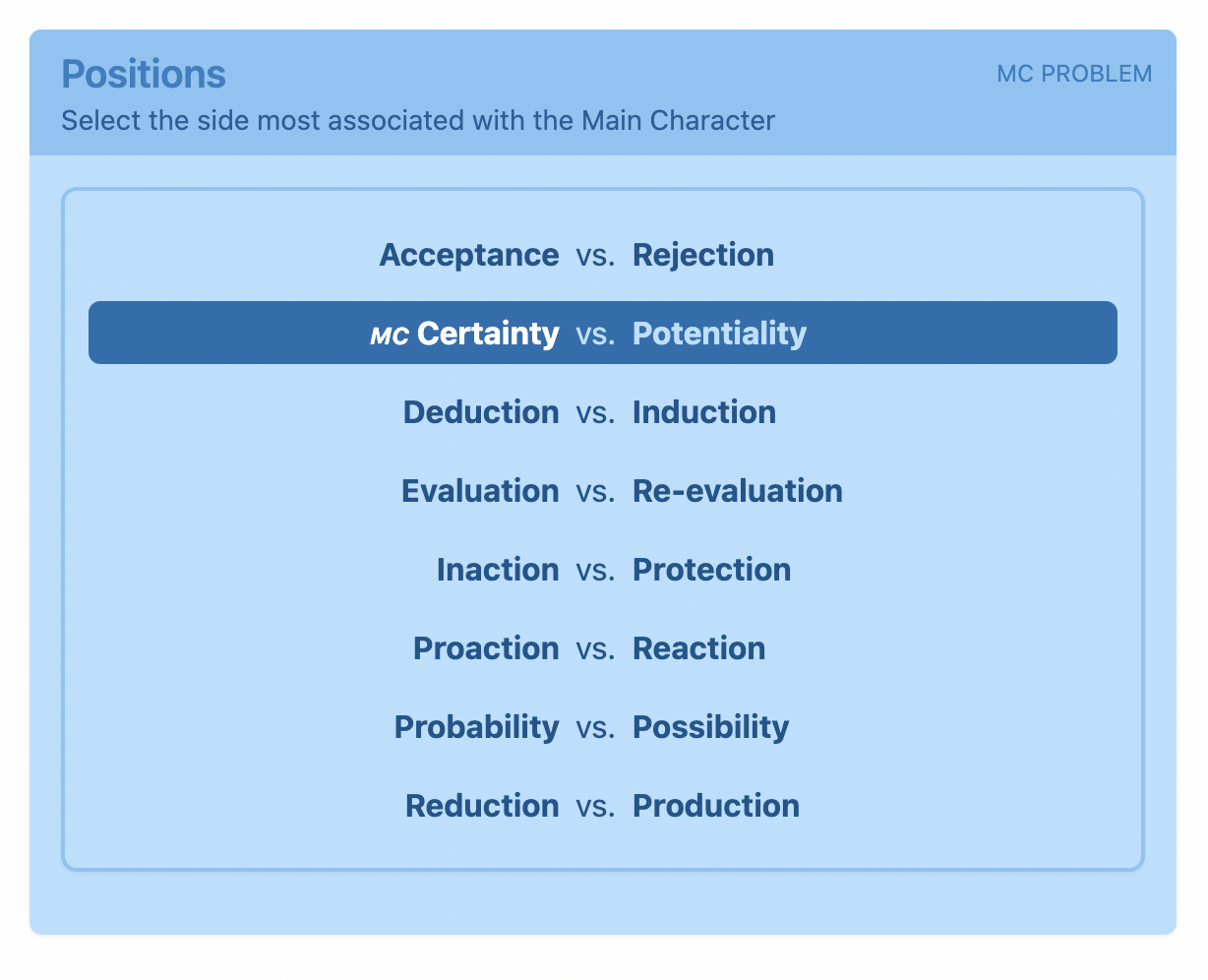 Positions Found in the Contemplative Family

It may be that you have no idea what these Elements mean, or the definitions behind them. Don't worry, Subtxt AI has you covered.

If you scroll down to just below the Positions box, you'll find two areas where you can define the Main Character and Influence Character Positions in greater detail. 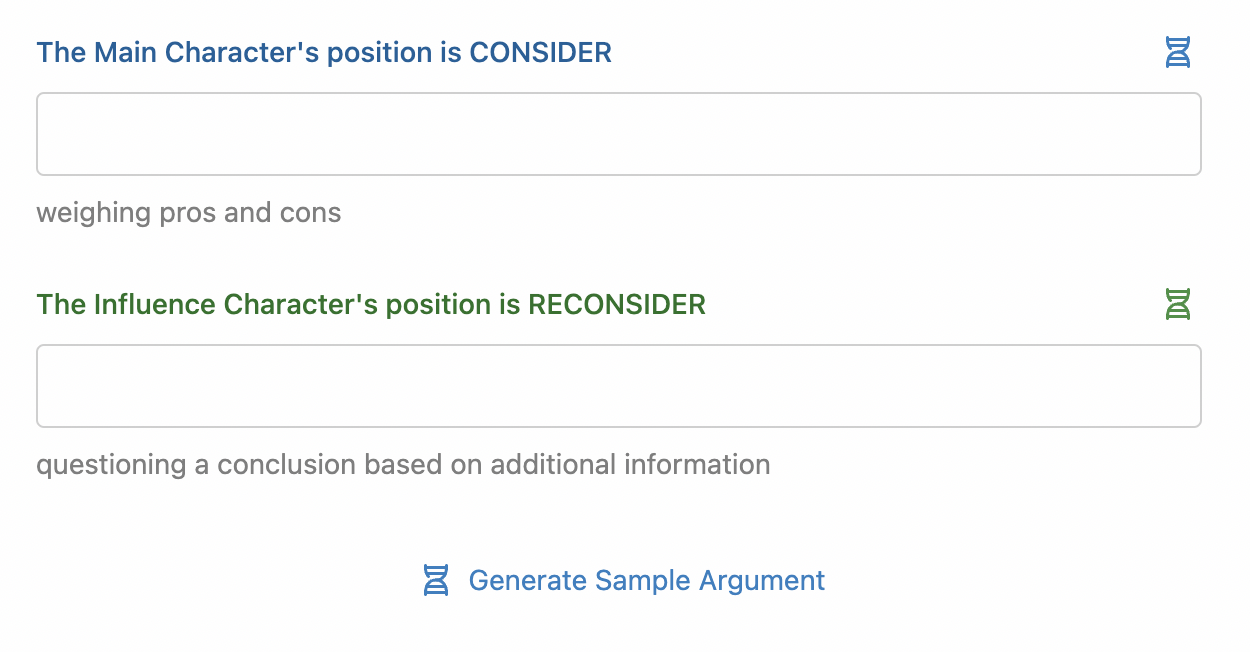 Just below each box, you'll find the short definition for each Element. In the above example, the Element of Consider is a position based on weighing pros and cons. The Element of Reconsider is a position based on questioning a conclusion based on additional information. You can imagine two characters carrying on an argument between these two Elements for an entire story (William Munny and Ned in Unforgiven, or Rick Blaine and Ilsa Laslo in Casablanca).

If you still have no idea what any of that means, or wonder if a particular set of Elements will work for your story, simply tap the Subtxt AI icon and Subtxt will generate a meaningful argument for you. 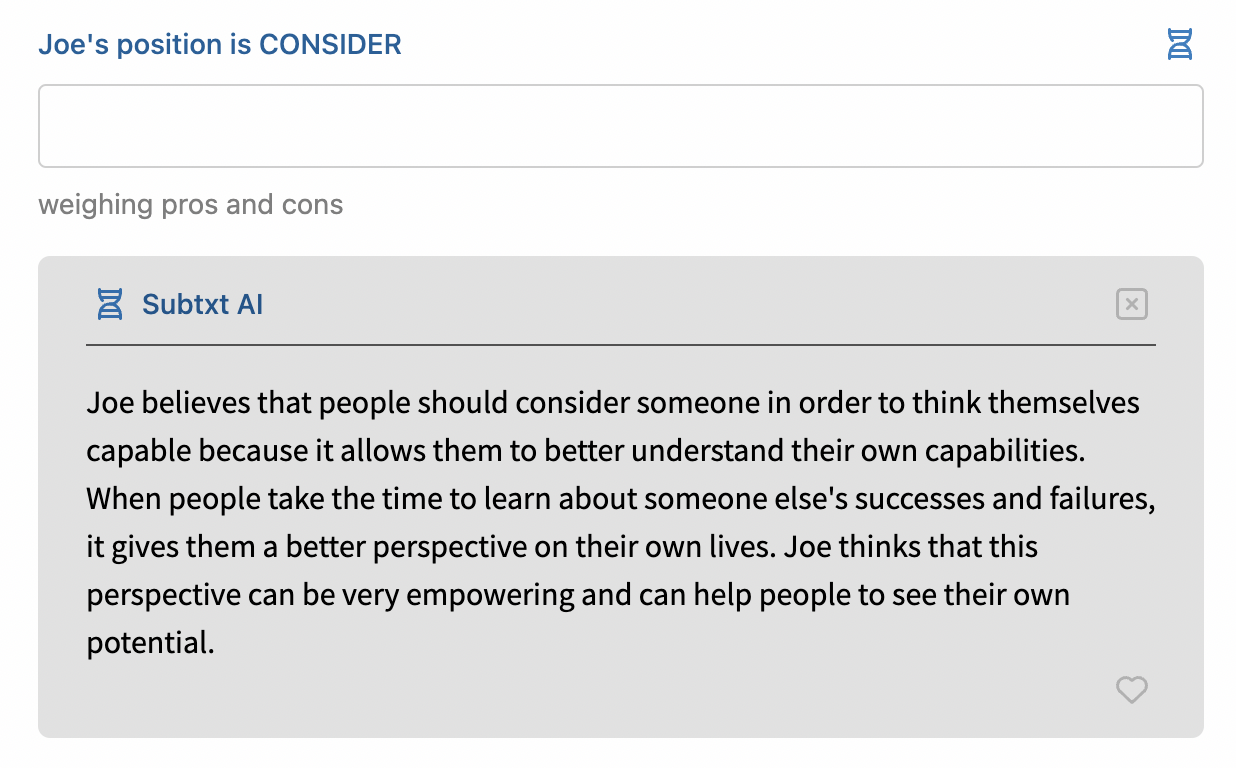 One Position with Consider as the Subtext

In the above example, Joe (the Main Character) is driven to argue that people should "consider themselves capable" because it allows them to better understand their capabilities. Note that this is only one example of Consider as the basis for a Position in an argument. There are literally hundreds of millions of different takes on this (and access to millions more through Subtxt AI).

If you find a Position that matches up nicely with what you want to say with your story and your Main Character, tap the heart symbol to have Subtxt copy that information into the Main Character Position box.

You can also do the same thing with the Influence Character to find the counter-argument of the story. 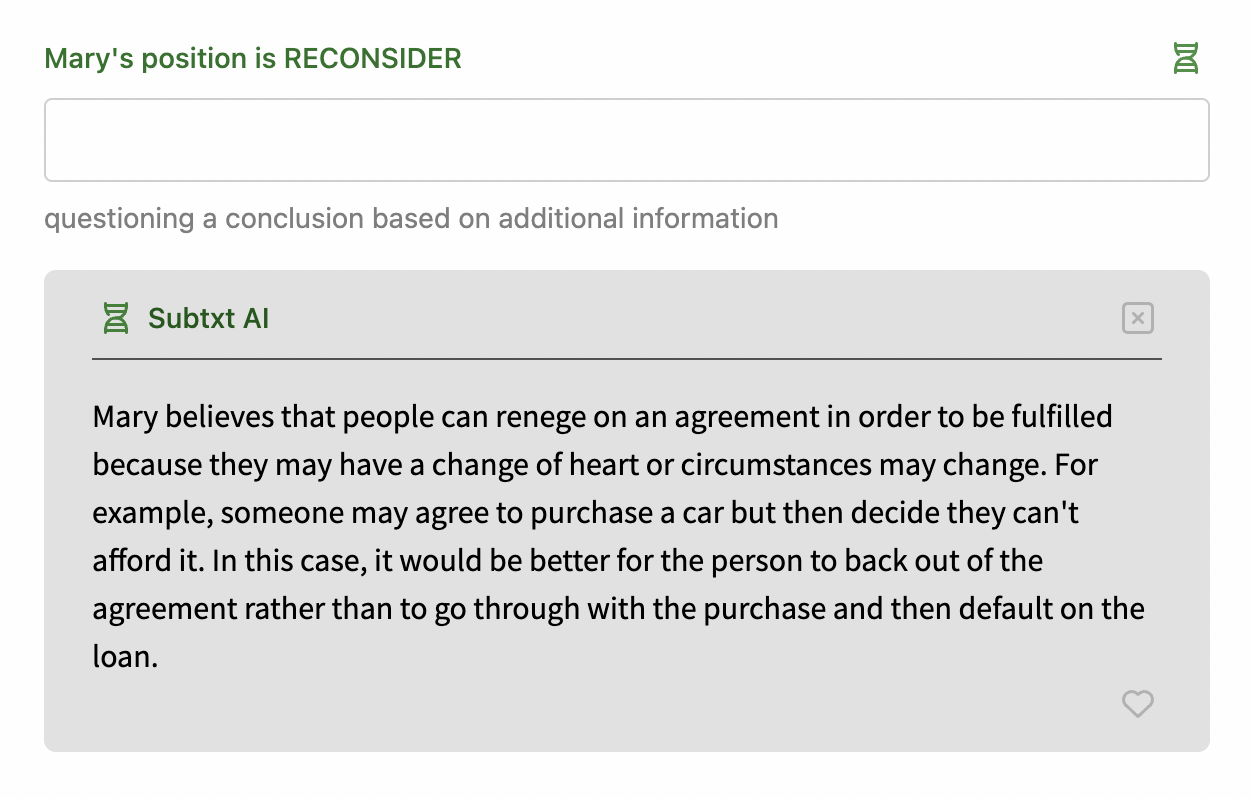 One Position with Reconsider as the Subtext

Notice how the counter-argument isn't just the "opposite" of what the Main Character believes is important. This dynamic between Positions is what generates the narrative drive of a story. If for instance, the counter-argument was simply the opposite, or negative of the first ("Mary doesn't believe people should consider themselves capable", for example) the story would be dead in the water from the very start. Joe and Mary would simply let bygones be bygones, and part their separate ways.

That doesn't make for a great story.

Generating the Classic "You and I" Scene

Those four or five moments Robert Towne spoke of? One of them usually turns out to be a scene where the Main Character or Influence Character tells the other "You and I are both alike."

If you would like an idea of what this scene might sound like in your story, you can do that right here in the Premise Builder after you've defined Positions for the Main Character and Influence Character. 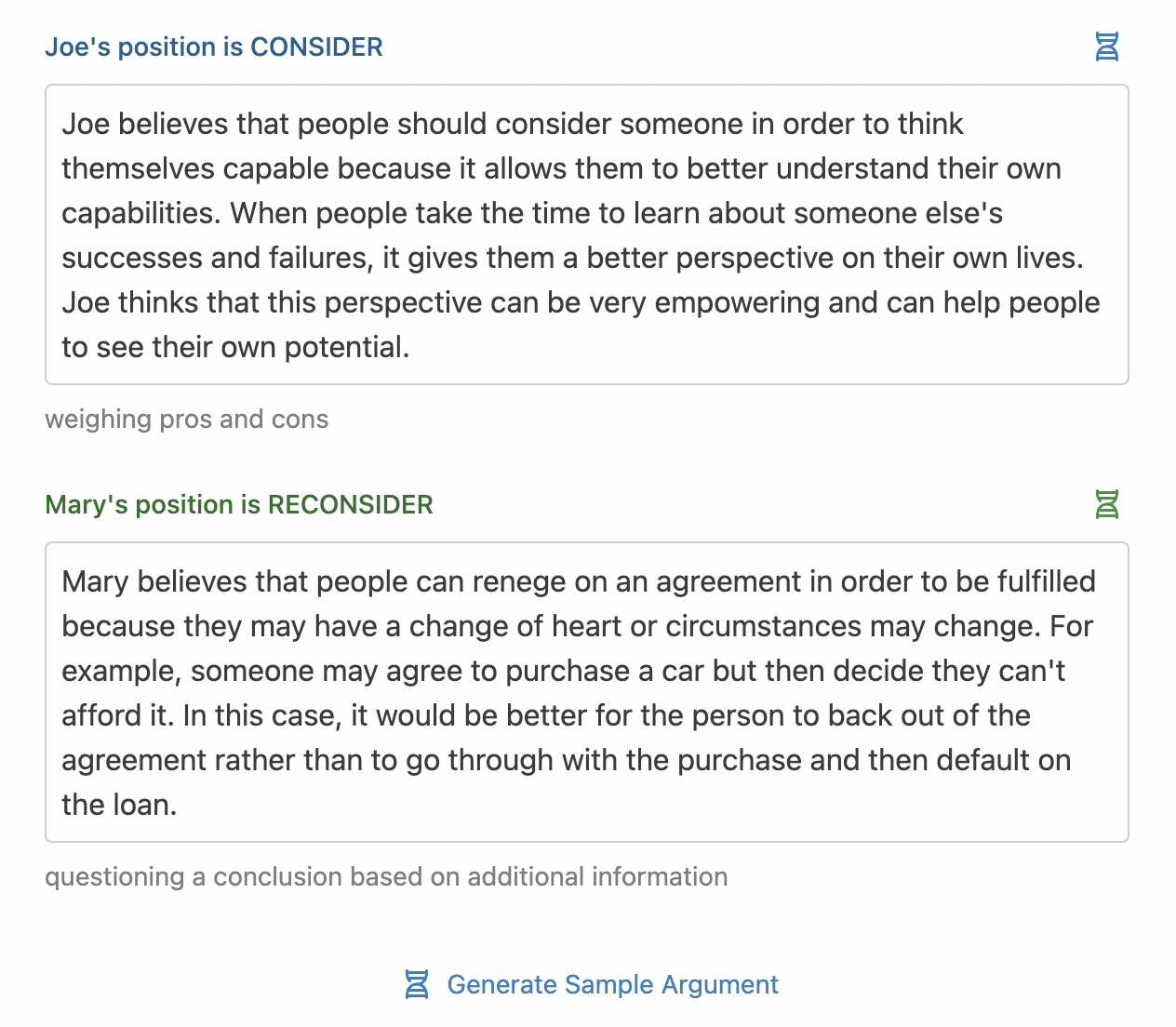 Two Positions Ready for an Argument

Once you have those Positions defined, all you have to do is tap that button marked "Generate Sample Argument" and let Subtxt work it's magic... 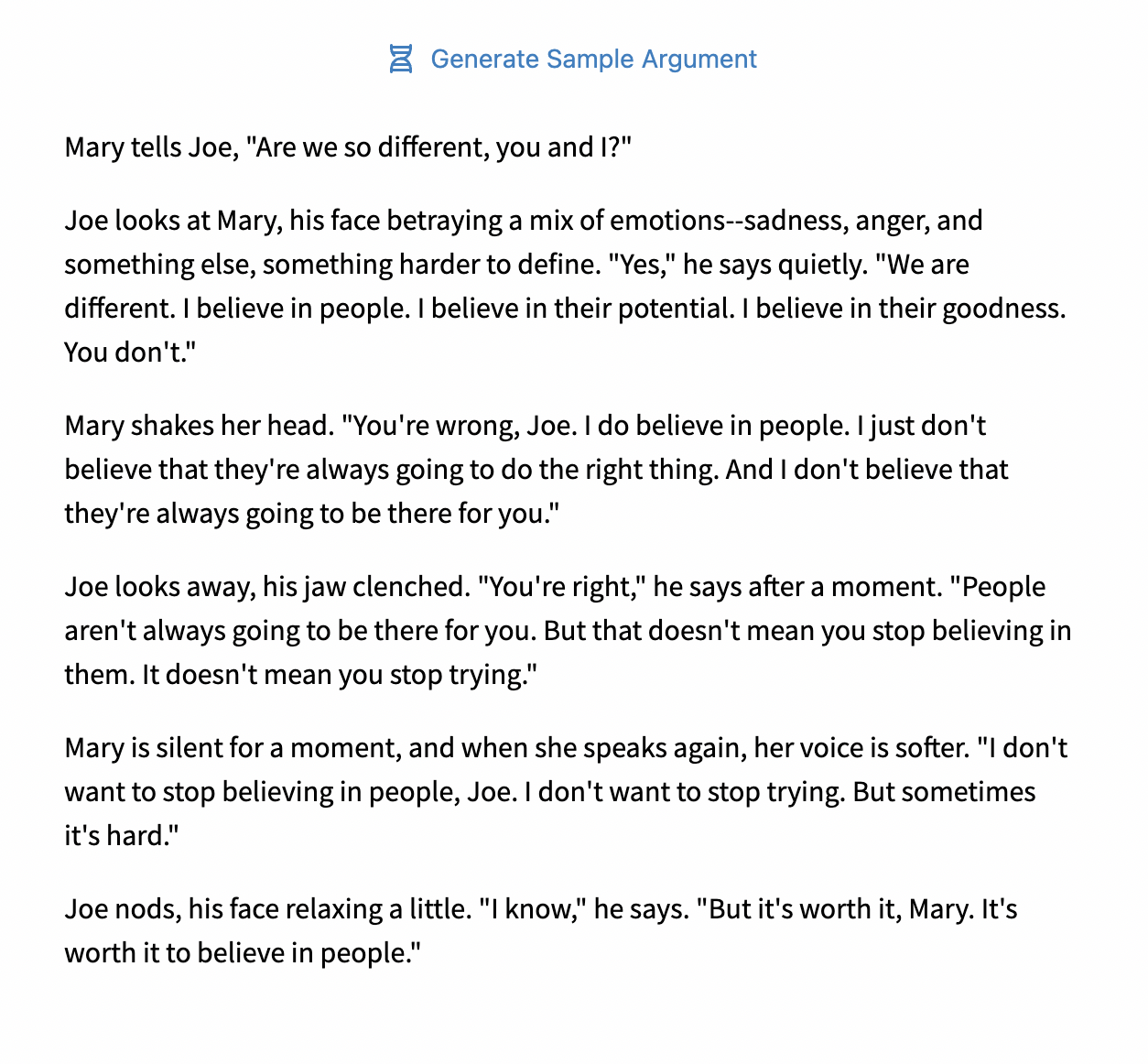 Sample "You and I" Argument

Not that you would necessarily use this in the final draft (though you might), but at the very least it should give you a greater understanding of what story's argument and narrative drive is communicating to the Audience. If nothing else, it should give you ideas of where to take your story now that you can see the main dramatic argument in action.

(Make sure you save it to your Premise by tapping the "heart" button if you like it).

And, of course, if you don't like what Subtxt wrote, you can always ask it to try again... 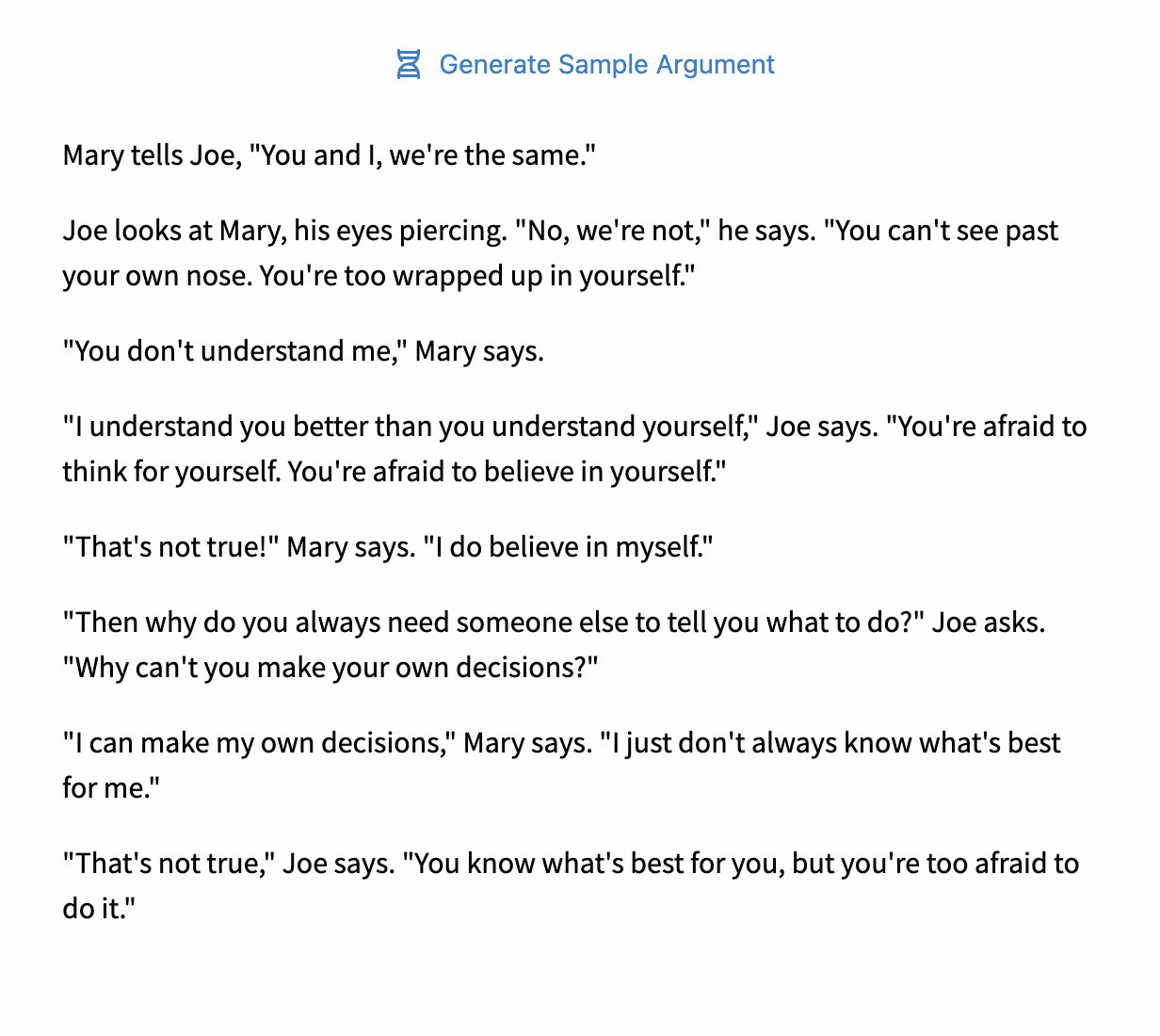 Second "You and I" Argument

See how, at the core, both examples reflect the same argument? That's what it is like to finally see the difference between Subtext and Storytelling. The Subtext is the same in both examples (an argument between Consider and Reconsider), yet the Storytelling on top--what the Audience actually encounters--is quite different.

Feel free to experiment with different Positions until you find one that connects with your artistic vision. You can even save several different arguments and combine them together. Then, you can refine your final argument by moving on to the next section: Subtxt Settings.

Video: You and AI