Perhaps the most important decision you’ll make when writing a story—and the one that exhibits the greatest significant impact on the final product—is your selection of conflict for the Four Throughlines.

Two of the four you likely already know—your Main Character and the Plot. The other two, the Influence Character and the Relationships, you can figure out much later in the process. In fact, both of these will naturally fall into place given the first two.

Open the Premise Builder and find the section marked Four Throughlines. Here you’ll find four colored boxes, each signifying one of the four major Throughlines of a complete story.

There is only one rule when it comes to the alignment of these Throughlines: the Main Character Throughline must always be diagonally opposed to the Influence Character. This arrangement guarantees the greatest amount of diametrically opposed conflict in the two primary subjective characters and their points-of-view.

You know that line, “You and I are both alike”? It’s usually followed by someone else saying, “We’re nothing alike!” That interchange exists because of this relationship between the Main Character and Influence Character. They’re nothing alike because they’re coming from two opposite points of view. For more on this, including a montage of clips showcasing this exchange, check out Two Sides of the Same Coin.

In addition to the Four Throughlines, there are four Families of Conflict that set the type of conflict in your story.

Each family consists of four Methods that sync with one another in terms of narrative focus. One family finds Past and Memory together; another puts Present and Conscious together. By keeping the conflict in your story “within the family” you guarantee thematic integrity.

You’ll find the current family selected in the grid of small boxes beneath the Four Throughlines.

The results of your current selection are found beneath the names of each Throughline. For instance, if you have the Aspirational family checked, then the Methods beneath each Throughline will be Future, Obtaining, Becoming, and Subconscious. If you select the Profound family, the Methods switch to Past, Understanding, Conceptualizing, and Memory. 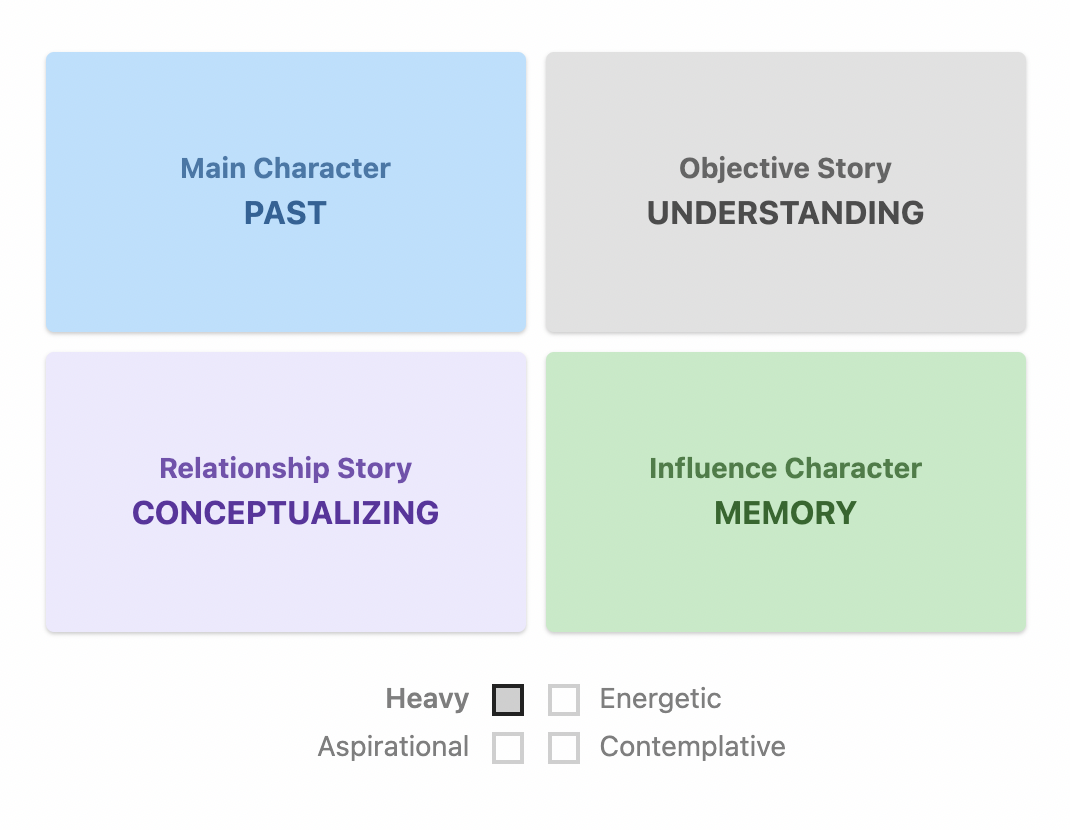 The positions of these Methods within the grid of Four Throughlines is fixed. If you drag a Throughline to a new location, the Methods stay behind to be “picked up” by a new Throughline.

This two-pronged approach of shifting perspective (moving the Throughlines) and anchoring conflict (selecting a Family of Methods) allows you to dial in the kind of story you want to write. With Four Throughlines and Four Families, there are 32 possible combinations for you to choose from.

How then, are you to possibly tell the difference?

Subtxt maintains an extensive catalogue of professionally curated Storyforms categorized, in part, by Genre. The arrangement of the four Throughlines by classification (Domains) sets the Narrative Personality of a story. By aligning the Source of Conflict experienced in the story with a particular perspective, the Author sets the overall feeling of what it is like to "hang out" with a story. 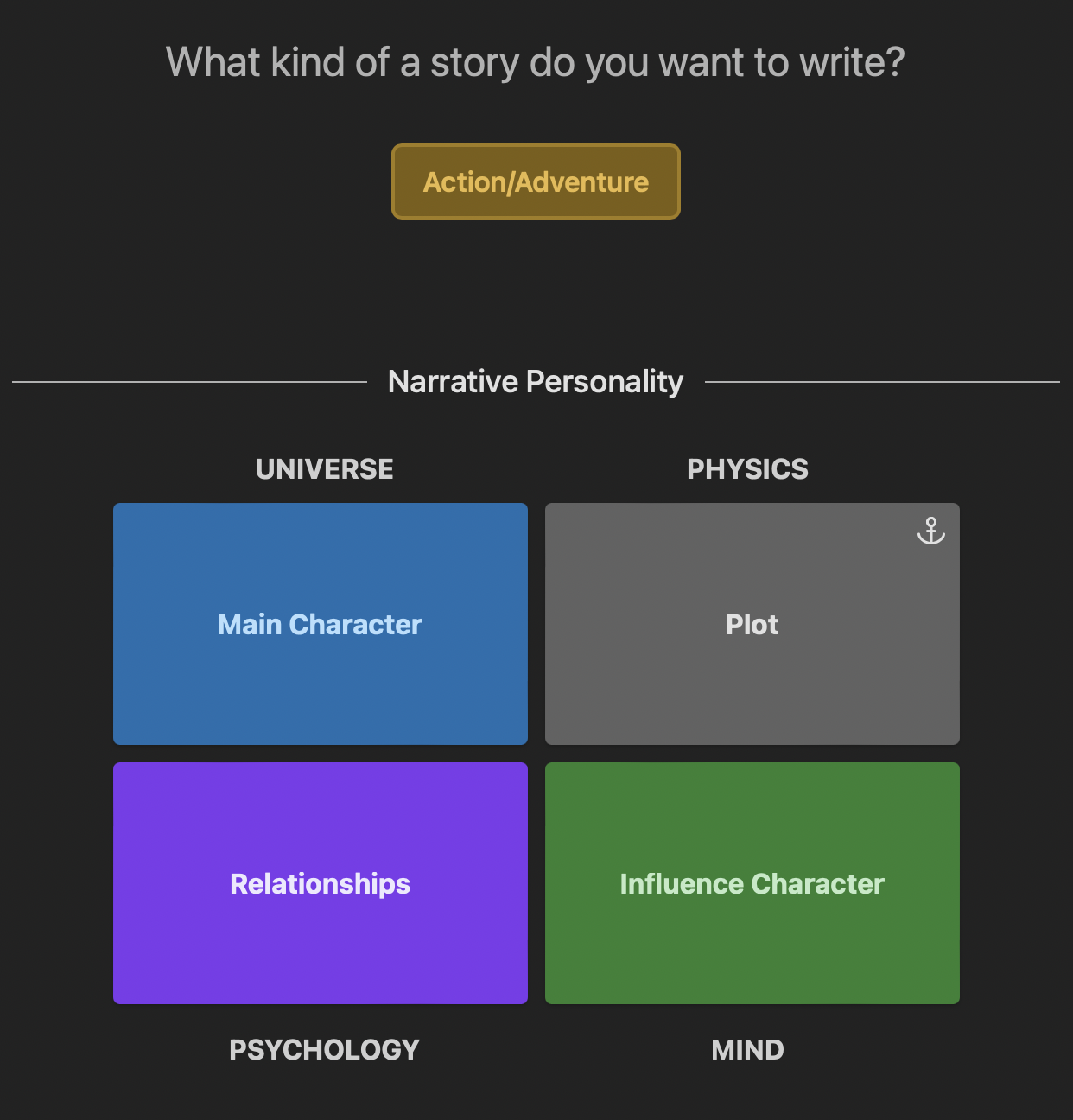 There isn't anything special about this Genre above any of the others--just that it's the most common one used in Western storytelling today.

Note the placement of the Plot in Physics and the Main Character in Universe. Most Action/Adventures focus the central of their plot in Physics: all the characters come into conflict over doing things and trying to control situations through physical activity.

In addition, these Action/Adventures often position the Main Character in Universe: the central character is often one dealing with personal issues surrounding their physical status, or reputation, or special abilities (their place within the "universe" is most central to their conflict).

Now, watch what happens when you switch Genres. Tap the gold button beneath the "What kind of a story do you want to write?" prompt and select Courtroom Drama.

Both the Plot and Main Character exchange points-of-view with the Influence Character and Relationship Story Throughlines.

In a Courtroom Drama, we find the Plot in Mind: all the characters come into conflict over incongruent attitudes--more often than not, whether an individual is guilty or not.

And while the initial example of A Few Good Men finds the Main Character Throughline in Psychology (Tom Cruise's character Daniel Kaffee deals with a dysfunctional laxadaisacal point-of-view at the start), not all Courtroom Dramas position the Main Character in the same way.

The Variations within a Genre

Note the anchor icon located in the upper right hand corner of the Plot Throughline. This signifies that, for this Genre, the Plot must remain in the Mind Domain...whereas the Main Character Throughline has some leeway.

You can grab the Main Character Throughline and shift it away from Psychology and into Physics, and still maintain the same Genre.

Now, we have 12 Angry Men. The Plot still revolves around fixed mindsets of guilty or not guilty, but now the Main Character Throughline is less about a dysfunctional way of thinking, and more about the struggle to teach everyone in that room the idea of this boy's innocence.

Daniel Kaffee struggles with a dysfunctional psychology, where as Henry Fonda's Main Character Davis struggles with the physical nature of teaching others.

You can, of course, break out of Genre and move the Plot Throughline into any one of the four Domains and call it a "Courtroom Drama."

Just know that in doing so, you will be playing against audience expectation--and usually, not in a great way. Most Audiences arrive at a story with a certain expectation of what hanging out with that story will be like. They expect Action/Adventures to be all about physical conflict, and they expect Courtroom Dramas to be about fixed attitudes.

Subtxt signals your modification by placing the label "Modified" under your chosen Genre. In addition, Subtxt lists the available Genres that match your current selection.

In the example above, shifting the Plot of a Courtroom Drama into Psychology switches the entire personality of the story over to something more closely resembling a Fantasy Romance, Historical Drama, Psychological Thriller, or Sci Fi Satire...

Now, you're free to always write whatever you want, a Sci Fi Satire Courtroom Drama may be just what you're looking for--just know that you might be creating a personality within a chosen Genre too strange for most audiences.

You can always find the complete list of Genres available in Subtxt here: Genres

Crafting a Premise ← → Types of Genre