The final pieces to the Premise Builder puzzle are the Character and Plot Components. Consisting of one part objective and one part subjective, these pressure points define the nature of what you’re looking at within a particular Storyform. The juxtaposition of the two, within the context set by the Subtxt Settings, creates the thematic premise of your story.

If you've ever been asked, "Is this a character-driven story, or a plot-driven story?" the only right answer is YES.

Both work together to create a complete story.

We’ve already seen how choosing a particular narrative family colors the thematic interests of a story. Now we dive into those families to explore which children are giving us the hardest time. 😊

Click on one of the four families located just beneath the Throughlines and watch how the family of Character Elements switches within the blue box below. 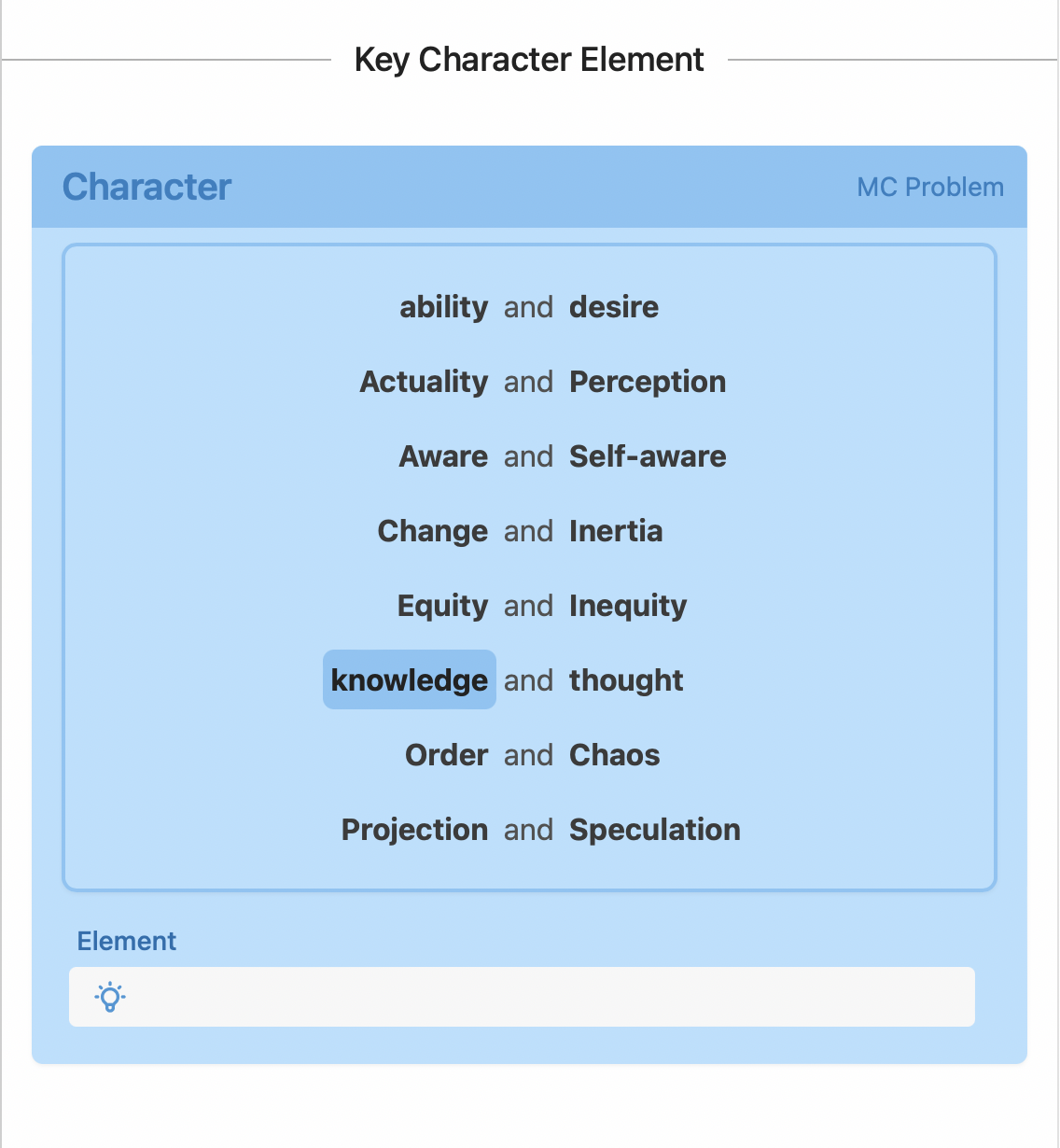 The Aspirational Fancily offers Pursuit, Avoid, Faith, and Temptation amongst others. The Profound Family carries Perception, Actuality, Self-awareness, and Chaos. Selecting one narrows the focus of the story you’re building on that one particular Element. It becomes the Motivation that sets into motion the rest of your story.

But it doesn’t act alone.

Look beneath the blue Character Element box to find a pair of Character Arcs—one for the Main Character and one for the Influence Character. While not selectable, these arcs do react to the choices you make above in the Premise Builder. 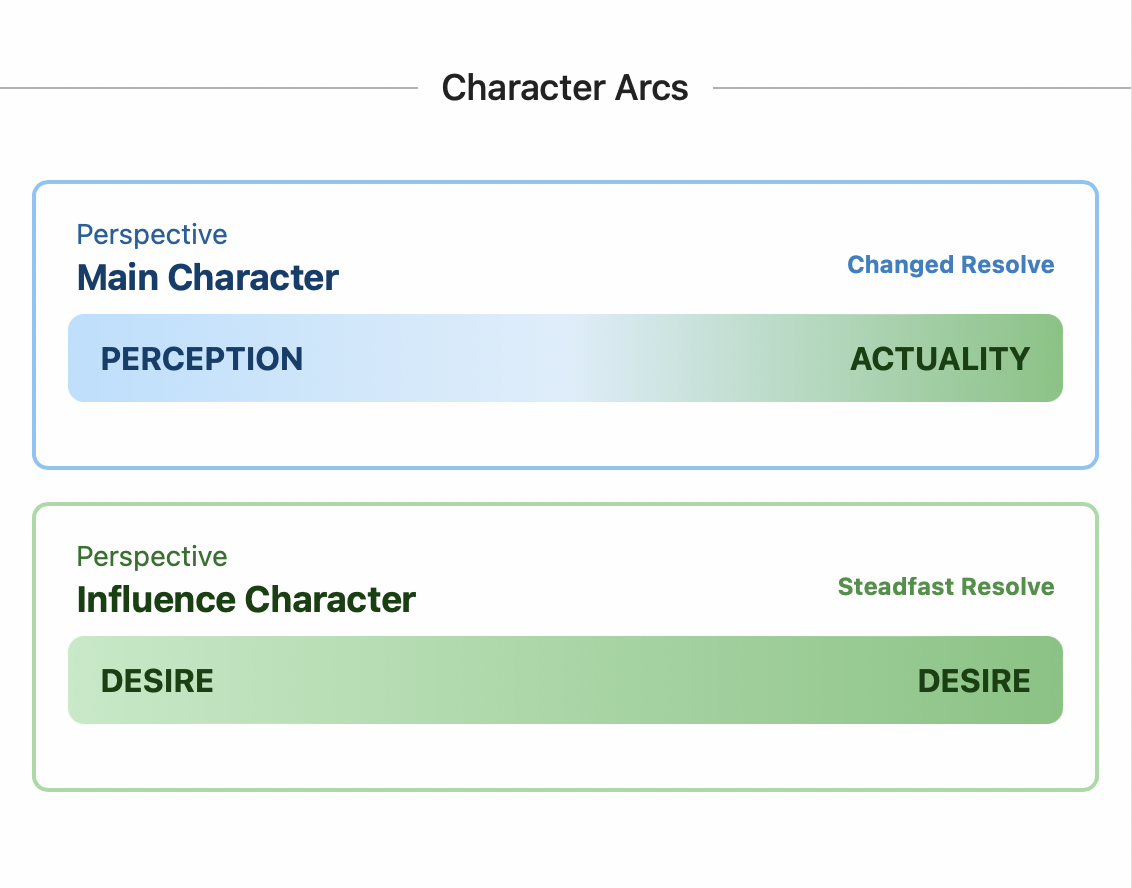 Subtxt offers them as an easy way to check the growth of the characters in your story against what it is you are trying to say. If you can’t imagine your characters starting and ending like this, or wish to readjust them, return to the Subtxt Settings and/or the selected Element in the Character box.

The Polar Opposites of Motivation

Note how one Character Arc illustrates opposite Motivations, while the other replays the same Motivation twice. These two patterns are responsible for making the argument found in your Premise. Be sure you understand the difference between the two and that you illustrate both clearly in your story.

Regardless of Mindset, the character adding a New Motivation does so in relation to the other character holding fast to their Motivation. If both were to adopt New Motivations, the meaning behind why they changed would be lost—and the story would become meaningless.

The typical rebuttal to this idea of one character adopting a new motivation and the other maintaining one is, But what if I want both characters to change? Isn’t there some meaning in that?

If you feel strongly about both characters undergoing radical transformation of perspective than these two characters will act as one character in another, larger story. It may be difficult to conceptualize at first, but meaning defines structure—not the other way around. There is no such thing as a story that has a structure; there is only intent, which defines the structure, which then results in a story.

One “story” may hold several different stories, but these are defined by the intent of what is being said by the Author. Abandoning one perspective in relation to another remaining communicates that meaning.

This relationship between the two arcs does not mean that the character growing into their Motivation may have moments of doubt along the way. But when comparing the beginning of the story with the end, this character finds themselves motivated by the same hidden force.

It always goes back to the meaning of the story. Everything that happens within the confines of that story illustrates this purpose of intent to the Audience.

The Pivotal Elements of a Storyform

If you are familiar with the Dramatica theory of story, you will recognize an indication of the Main Character's Pivotal Element (what Dramatica refers to as the Crucial Element) in the upper-right hand corner of the Character Element component. This Pivotal Element adjusts to your Subtxt Settings:

Much has been written about the theoretical concepts behind this relationship, and can be found on Narrative First, but for now it's enough to know that the Character Element of a Premise IS the subjective focus of your intention for writing a story.

With the Premise in Subtxt, the Plot Method adjusts based on the Mindset of your story as well as your intended Ending, or message. A Relationship-based Story (Holistic Mindset) focuses on addressing issues while a Reason-based story (Linear Mindset) directs it's attention on solving a problem through reaching a goal. You can see this emphasis on issues over problem-solving in the Premise Builder for Holistic Stories with an indication of "Plot" as the Outside World and "Character" as the Inside World.

Holistic Methods in the Premise Builder

A Holistic Mindset (Holistic story structure) is always more concerned with the balance between the external and internal worlds vs. any conceptual idea of "character" and/or "plot." In fact, in most instances, the idea of a plot within a Holistic story is anti-thetical to its very nature.

Regardless of the specifics, you maintain the same level of control over the storytelling of the Plot Method just as you would in any other area of Subtxt. You adjust the superficial surface-level aspects of what is told to the Audience, while Subtxt maintains the integrity of the structure beneath your story. 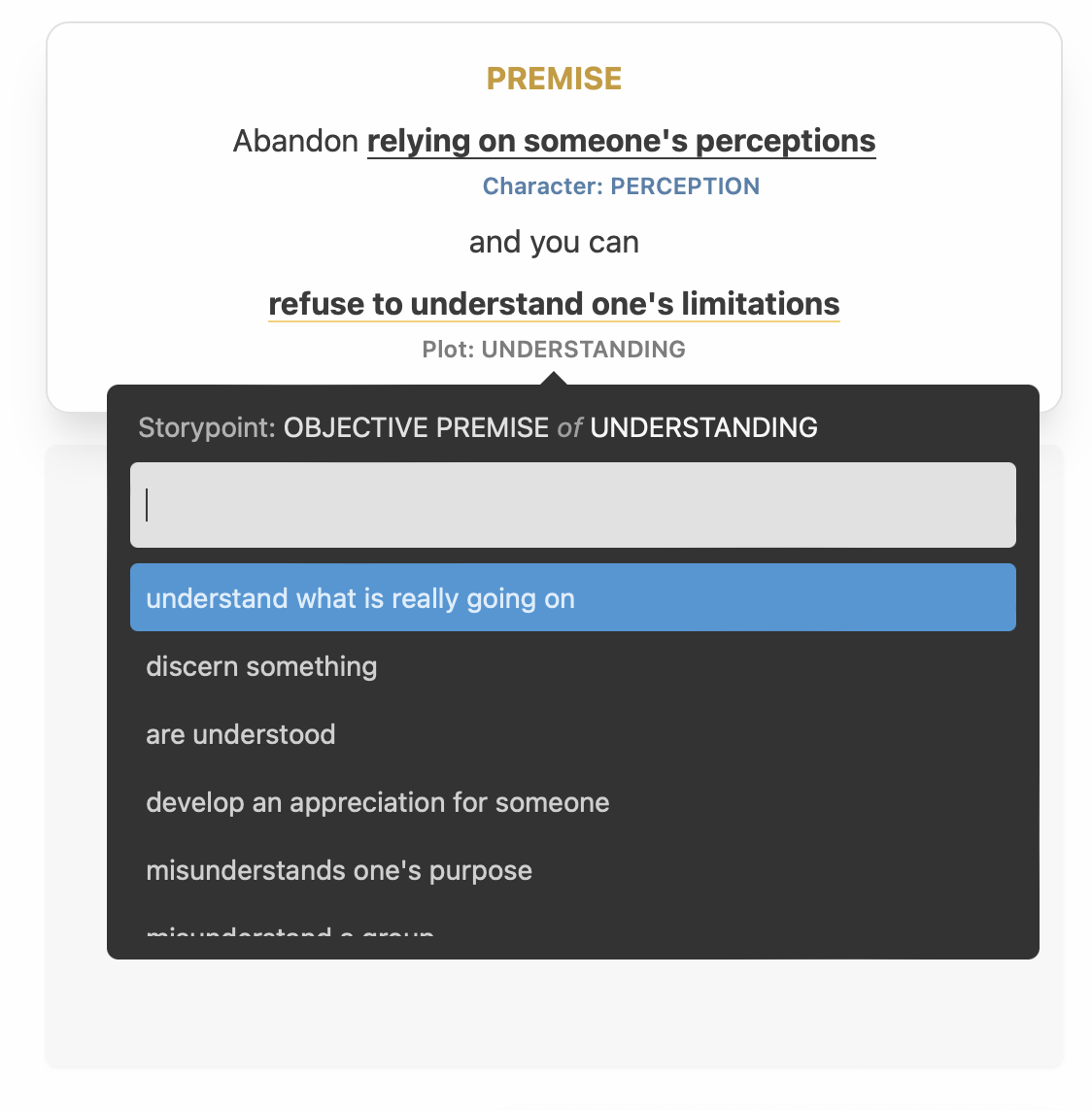 Plot and the Dramatica Storyform

For those familiar with the Dramatica theory of story, the Plot Method of a Premise is based on a variety of choices made within your Subtxt settings:

The Premise in Subtxt is a result of over a decade of helping professional writers use the Dramatica theory of story. Think of the Premise as a means of understanding the Storyform without having to know the ins and outs of every single Storypoint. In short, the Premise is a shortcut meant to help you skip over decades of learning the intricate complexities of the theory.

Feel free to use the Premise as a means of getting back quicker to what you love most--writing a great story.