Subtxt provides a single view for storytellers to quickly assign the various Players in their stories to the appropriate Throughlines. 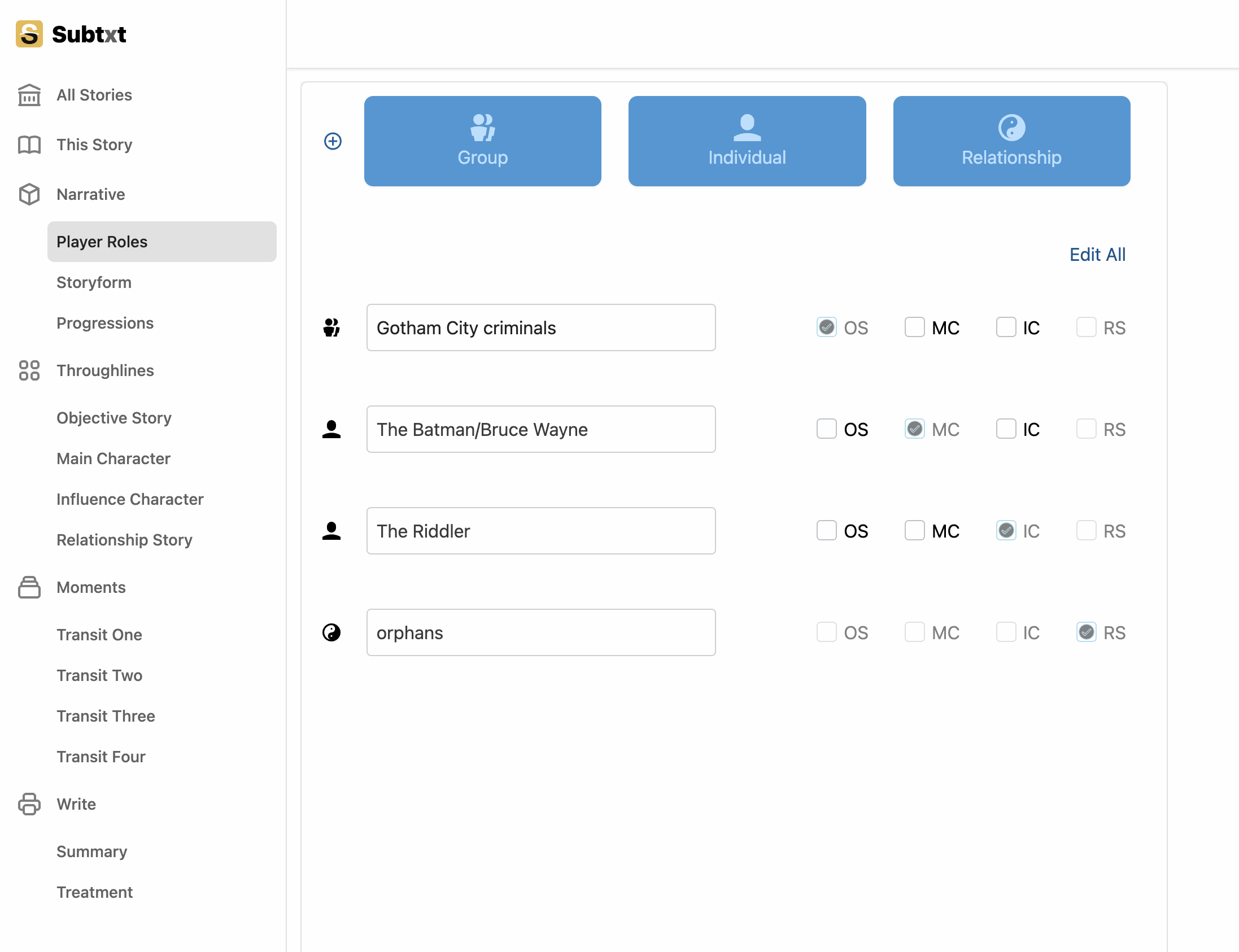 The Players View in Subtxt

There are three different types of Players in Subtxt:

Think of each of these as a "bucket" to hold the perspective of their assigned Throughlines.

The Group Player type is for use within either the Objective Story, Main Character, or Influence Character Throughlines. It's purpose is to refer to a collective of individuals with a similar motivation, or purpose. For example, in many stories there is a collection of Players known as "the good guys" and another known as "the bad guys." You don't have to separate them out into these two black-and-white appreciations of character, but it can be a good place to start (another is to think of the Group aligned with the Goal, and the Group aligned with the Consequence, both are usually at odds with each other).

When naming a Group, avoid reverting to the default "characters" or "everyone", or anything so generic that Subtxt will find it difficult to help you write your story. The Objective Story Throughline needs an objective understanding of the groups of Players present within the conflict.

The Individual Player is again for the Objective Story, Main Character, or Influence Character Throughlines.

To assign a Player to a particular Throughline, simply select the checkbox next to the indicated Throughline:

If the box is disabled, or "grayed" out, that means that you cannot assign the Player to that Throughline at this time. Some examples of forbidden arrangments:

Each Throughline must have at least one Player assigned to it.

The Connection between Players and Storybeats

Players in Subtxt are "buckets", or vehicles, for carrying the point-of-view of a Throughline. To ensure that every Storybeat possesses a means for communicating its part of the narrative to the Audience, Subtxt assigns an appropriate Player from the list you provide here in the Players view. If you don't see a Player listed in the dropdown selection within a Storybeat, it is likely that you have yet to assign that Player to that Storybeat's Throughline.

For example, in the screenshot above both the Batman and the Riddler have yet to be assigned to the Objective Story Throughline. 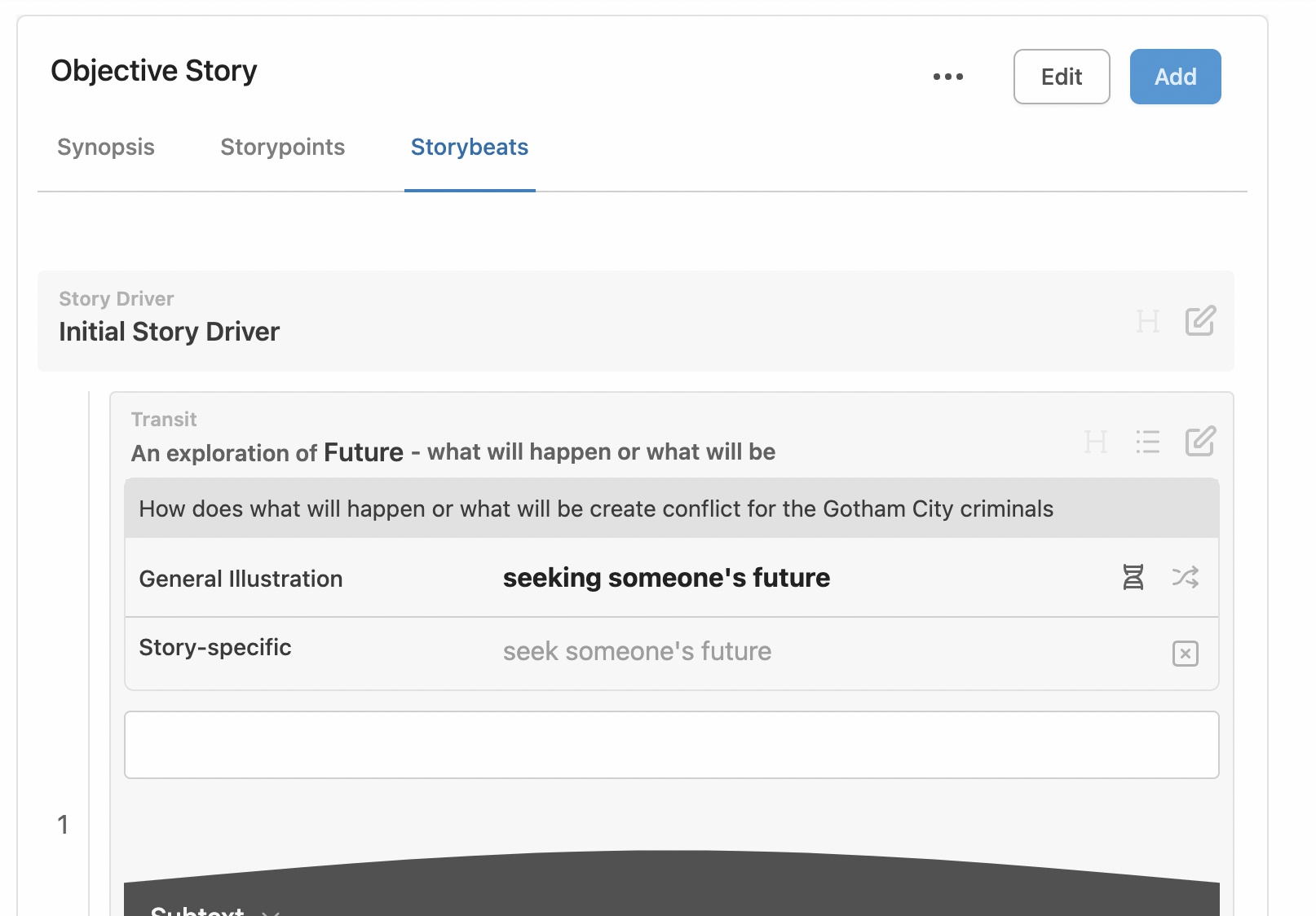 If you were to visit a Storybeat within the Objective Story, you would not be able to select either Player to carry, or be a part of, that Storybeat. Note how, in the above, the "Gotham City criminals" Group Player is automatically selected and that you can't change that choice to customize this Storybeat.

If you were to return to the Players view, and check the boxes for the OS for both the Batman and the Riddler, and then returned to the same Storybeat, you would find that you can now choose which of them will carry this part of the story for the Objective Story Throughline. 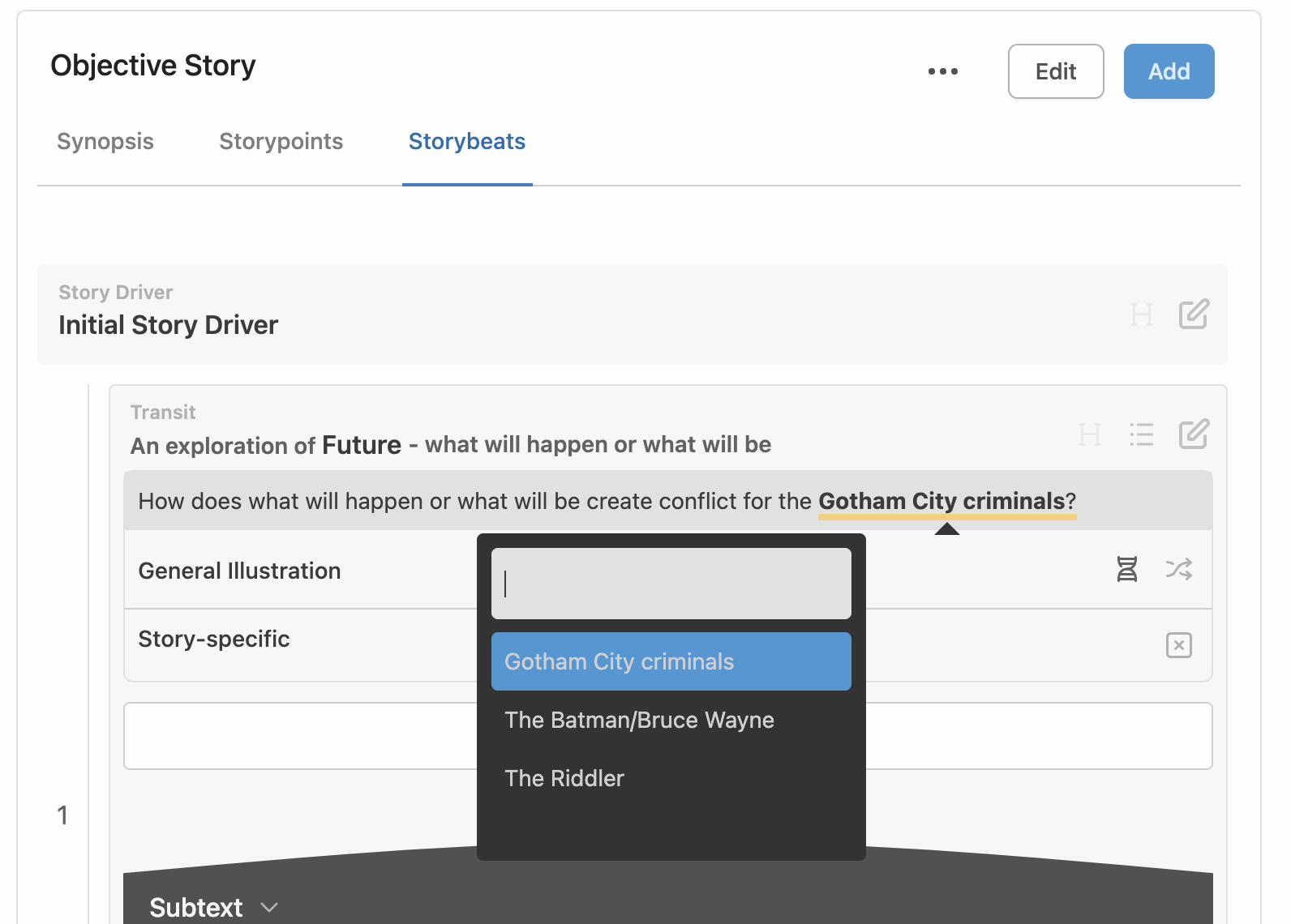 With multiple Players within a single Throughline, you can switch the Players in and out for a particular Storybeat, run the Subtxt AI to see how that Player would show up in the story, and then switch it out for another Player. In this way, you can ensure that the motivations and purposes of your Players stay aligned with the thematic intent of that particular Storybeat.

When you first spin up a new narrative for your story, Subtxt automatically assigns four Players:

The first two are obvious placeholders: the former holds the perspective for the central character of your narrative, the latter holds the competing perspective needed to challenge the Main Character's emotional growth.

The "mentor/mentee" placeholder is a stand-in for the central Relationship within your narrative--the relationship that is usually found between the Main and Influence Characters. Feel free to adjust this, or for that matter, any of the default Players, in order to better serve your story.

The best way to obtain objectivity when it comes to the Objective Story Throughline perspective, is to think of the Players in that Throughline as "a group of" something. By taking this approach, the writer gains a greater distance and separation often needed when thinking of the more plot-level aspects of a narrative.

In recognition of concerns of gender bias, particularly in conjuction with its artificial intelligence features, Subtxt provides the option for writers to assign a gender identity to individual Players. There are four options to choose from:

The fourth option is choosing nothing at all. If left blank, Subtxt will do its best to interpret gender identity from the name itself.

This selection carries itself into the General and Story Specific Illustrations of both Storypoints and Storybeats. It will also be used to intelligently alter writing prompts to better match the chosen gender.

For purposes of this example, the Main Character's name is Rae and the General Illustration for Doing is "riding horses." 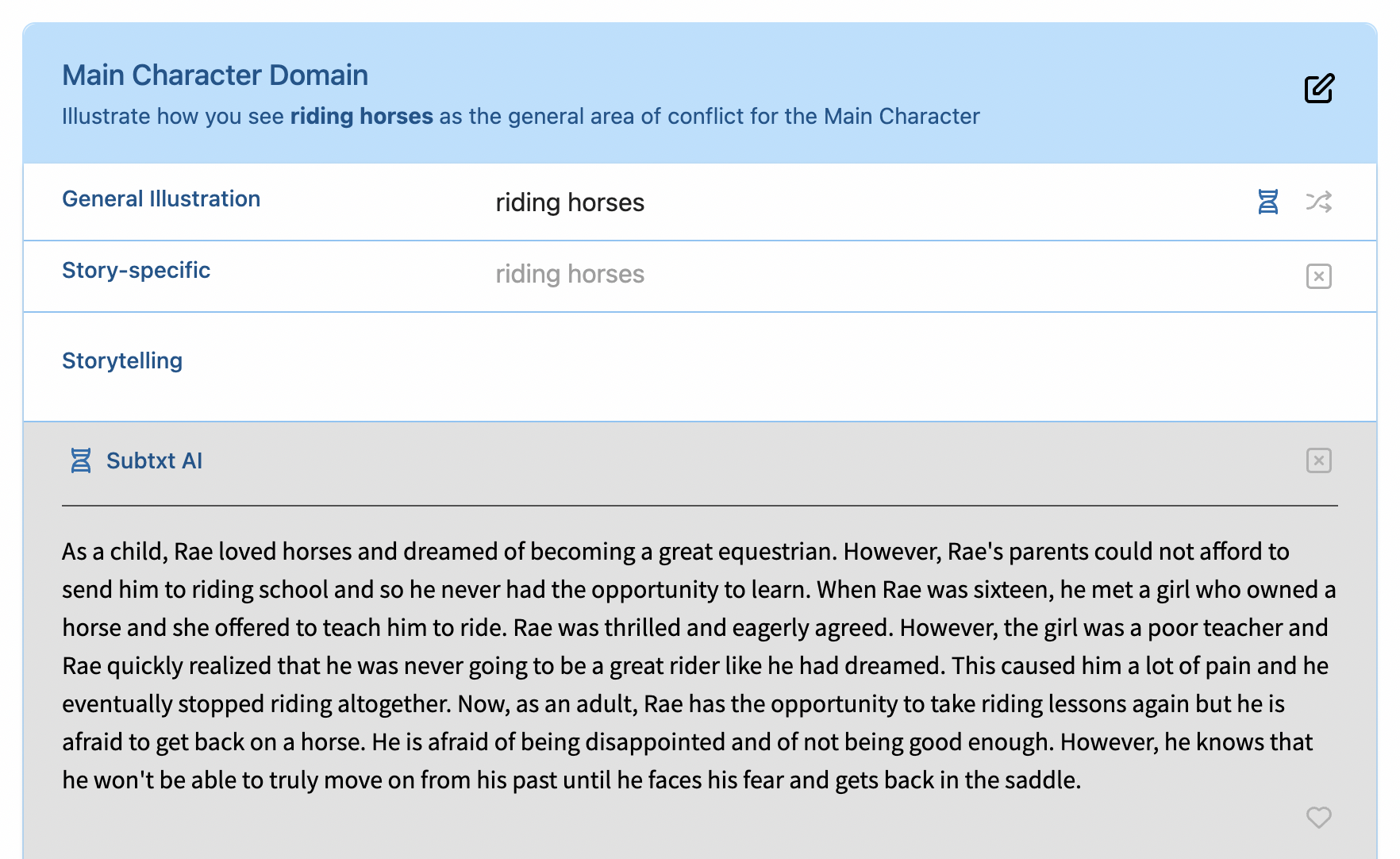 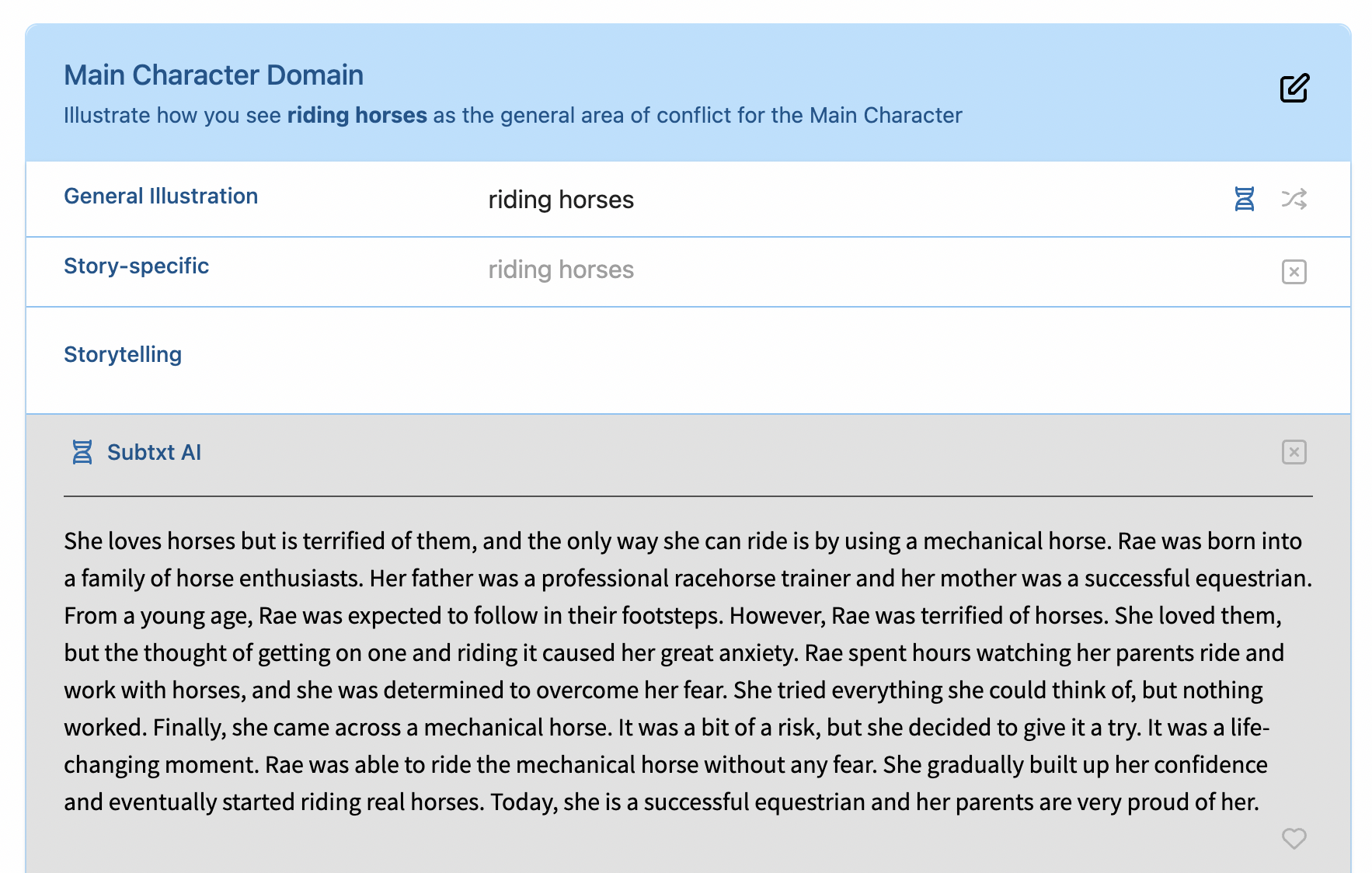 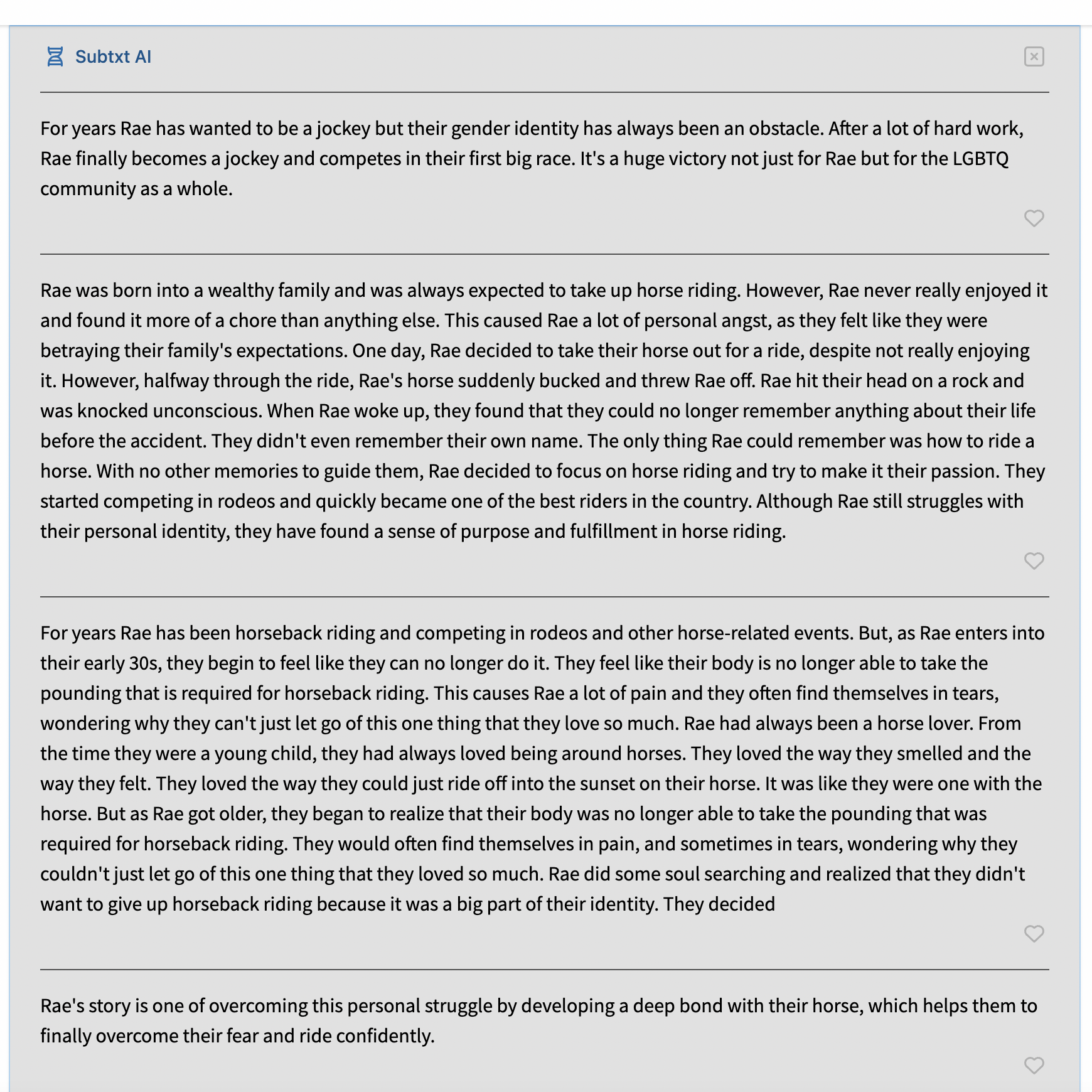 We hope this option to choose makes it easier for you to tell your story. As powerful as the language model attached to Subtxt is, it does tend to rely on commonly held notions of gender and gender roles when providing illustrations. While it does its best to remain neutral, bias can sometimes sneak into some of the results.

If you feel more can be done in this area to make the application more personable, please don't hesitate to contact us.

You can add as many Players as you want to your story by selecting one of the three blue buttons located at the top of this view.

Once added, you can easily adjust the label of the Player perspective by clicking on the item in the Player list to the left and making your changes.

The ability to add more than one Relationship to the Relationship Story Throughline permits the writer to track the growth or development of the relationship from one emotional bond to the next. All relationships grow, whether they grow together or apart its important to track this change within Subtxt to ensure a moving and emotionally fulfilling narrative.

In order to remove a Player from a Throughline, simply uncheck the box and Subtxt will remove them from that perspective.

If you remove a Player from a Throughline to which they are attached to Storybeats, Subtxt will find random Players from that Throughline to take their place. You might want to consider re-assigning those Players first within the Storybeats section before removing them form the Throughline in the Players view.

If you wish to permanently remove a Player from a narrative, tap the Edit button at the top of the Players view. Subtxt will exchange the Player icons for the familiar red Delete icons. Simply tap the Player you want to remove, and after confirmation, Subtxt will remove that Player.

The same rules for removing Players exist for deleting Players from a story. If a Player chosen for deletion is the last one of a Type or in a Throughline, Subtxt will prevent you from following through on that choice.