The Players tab offers you an opportunity to dive deep into the Motivations of those who populate the Objective Story Throughline of your story.

The Players Card in Subtxt

Player Motivations are always in context of the Story Goal. In the example above, "having something others can't control" is an Illustration of an Obtaining Story Goal. This Storypoint can be found at the top of the Storypoints tab within the Objective Story Throughline. If you have set a General or Story-specific Illustration, Subtxt will carry this over into each and every Player for quick reference.

For those of you writing a Female Mental Sex story, the Story Goal is replaced by the Story Intention.

The Two Most Important Motivations

There are two Motivations that are the key to everything in your story, as they represent the crossover point between Character and Plot. Signifying the two poles of the Dramatic Argument of your story, these Motivations cannot be removed from their assigned Player.

In Subtxt, we refer to these two positions as the Pivotal Elements of your story. 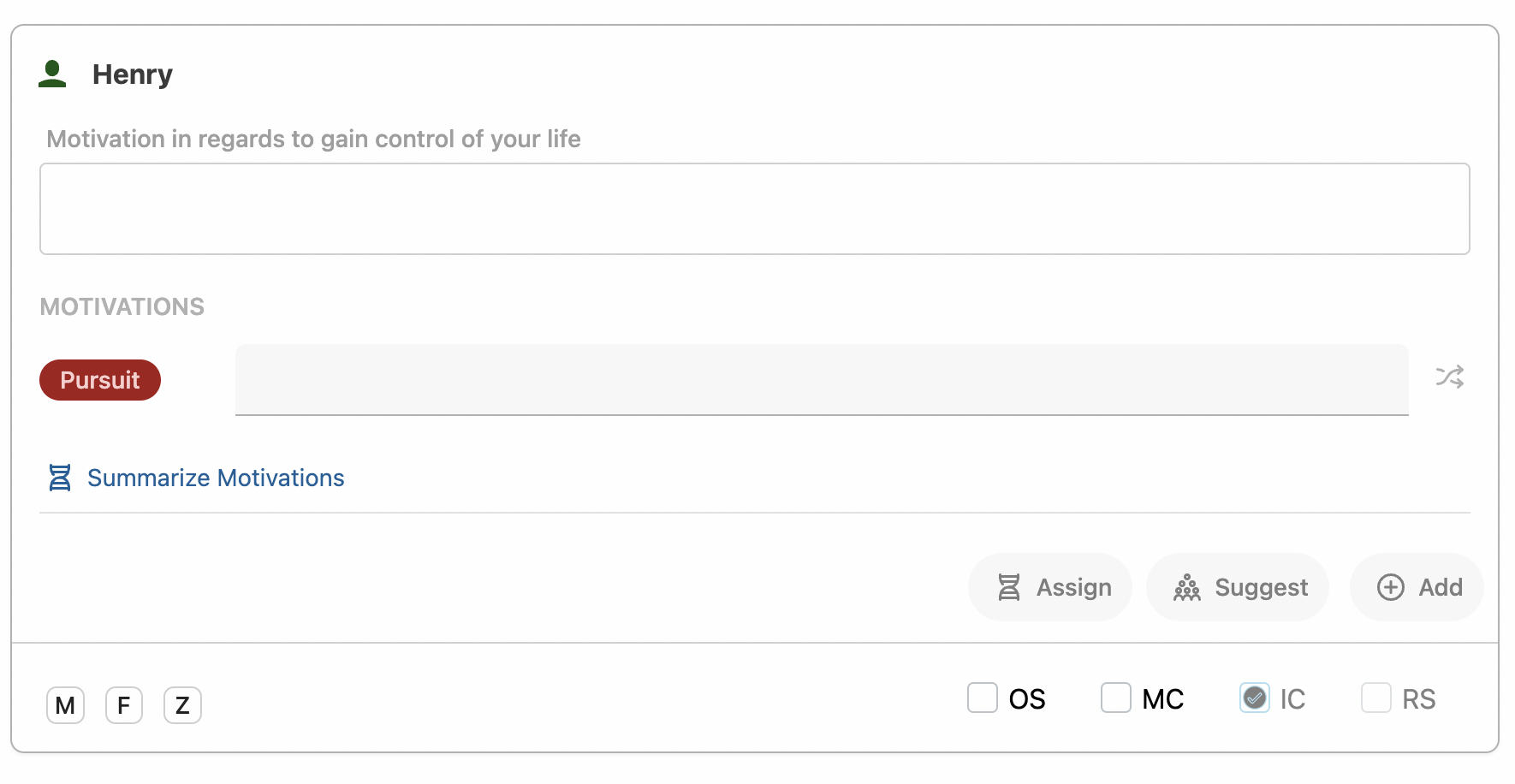 Subtxt marks these two Motivations by coloring them Red in the Players view. If you Illustrated these positions at the time of creating your story (within the Premise Builder), Subtxt copies over that information into the appropriate spot in the Player card.

That said, you can keep both Illustrations the same if you can't think of a way to differentiate between these two appreciations.

Adding Motivations to a Player

When you first start to develop Players in Subtxt, consider the Player in regards to the Story Goal and then write whatever comes to mind. When finished, click "Assign" to have Subtxt AI read your Illustration and makes suggestions for Motivations.

The green-labeled Element is the best understanding of what it is you wrote for an Illustration. The other two Motivations (if present), are the next best options in order of preference from left to right.

If you'd like to illustrate that Motivation in more depth, click on the empty space to the right of it and add your own insights/understanding of how this will show up in your story.

Feel free to add as many as you would like, as well as readjust or rewrite the main Illustration at the top of the Player card to zero in on your visualization and complete understanding of that Player. 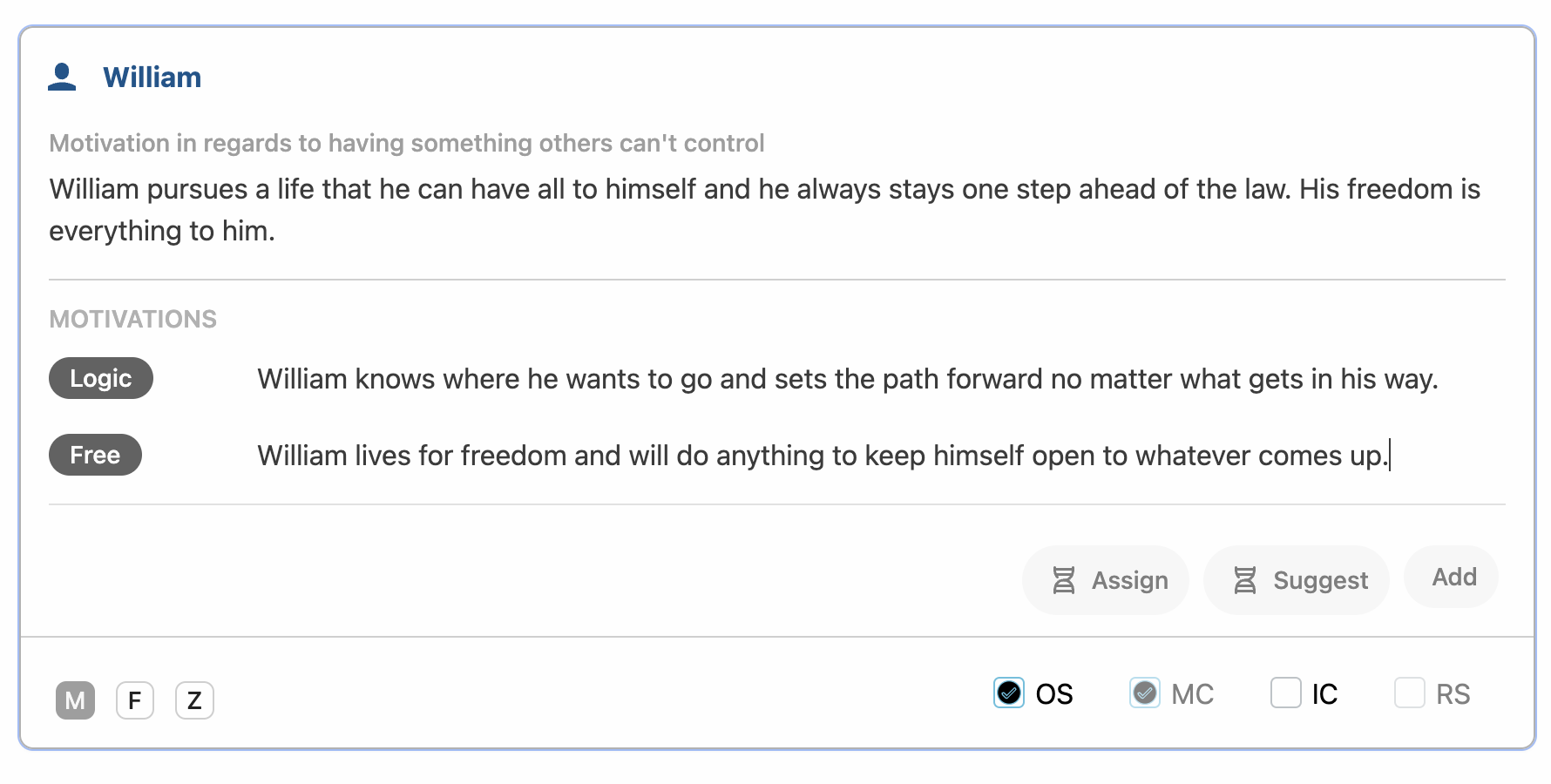 If you ask Subtxt to Assign multiple Motivations based on your Illustrations, and the answer comes back "Unknown" take this as an indication that there isn't enough information in your Illustration to warrant a Motivation. Try re-writing the Illustration, paying particular close attention to how the Player interacts in context of the Story Goal (Motivation in regards to...).

Note how in the example above, the Illustration for David has no relation to the Story Goal of "gaining control of your life", nor does it even closely resemble something approaching a Motivation, or drive, for a Player. The Illustration is descriptive and therefore inconsequential to the story.

If you try to add a Motivation that already exists for this Player, you will be asked to pick another one. Only one specific Motivation per Player.

Schizophrenic Motivations within a Player

If you try to add a Motivation that is the opposite of a Motivation already assigned to this Player, Subtxt will remind you that doing so would create a schizophrenic story. 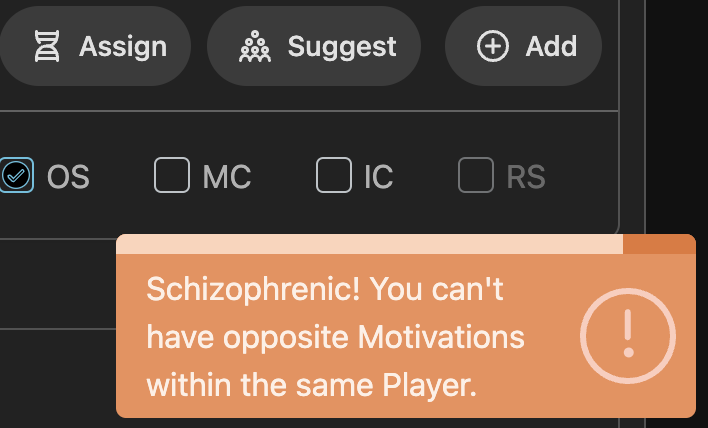 The purpose of assigning Motivations to a Player is to provide an opportunity for the Author to illustrate the relative appropriateness and inappropriateness of different Motivations. If competing Motivations were present within the same Player, they would effectively zero each other out in the minds of the Audience thus reducing the effectiveness of the narrative.

If you tried to add Oppose to a character already motivated by Support, Subtxt will give you the warning. You have the option to find other Motivations or you could remove the Motivation already in place and then add the new one.

If you decide you would like to remove a particular Motivation, tap on it and confirm the removal.

If you remove the last Motivation from a Player, Subtxt will automatically remove that Player from the Objective Story (signified by an empty checkbox in the bottom right hand corner of the Player card).

If you'd like Subtxt to help you round our your cast of Players, tap the "Suggest" button to see a random list of what still remains to be illustrated in your story. 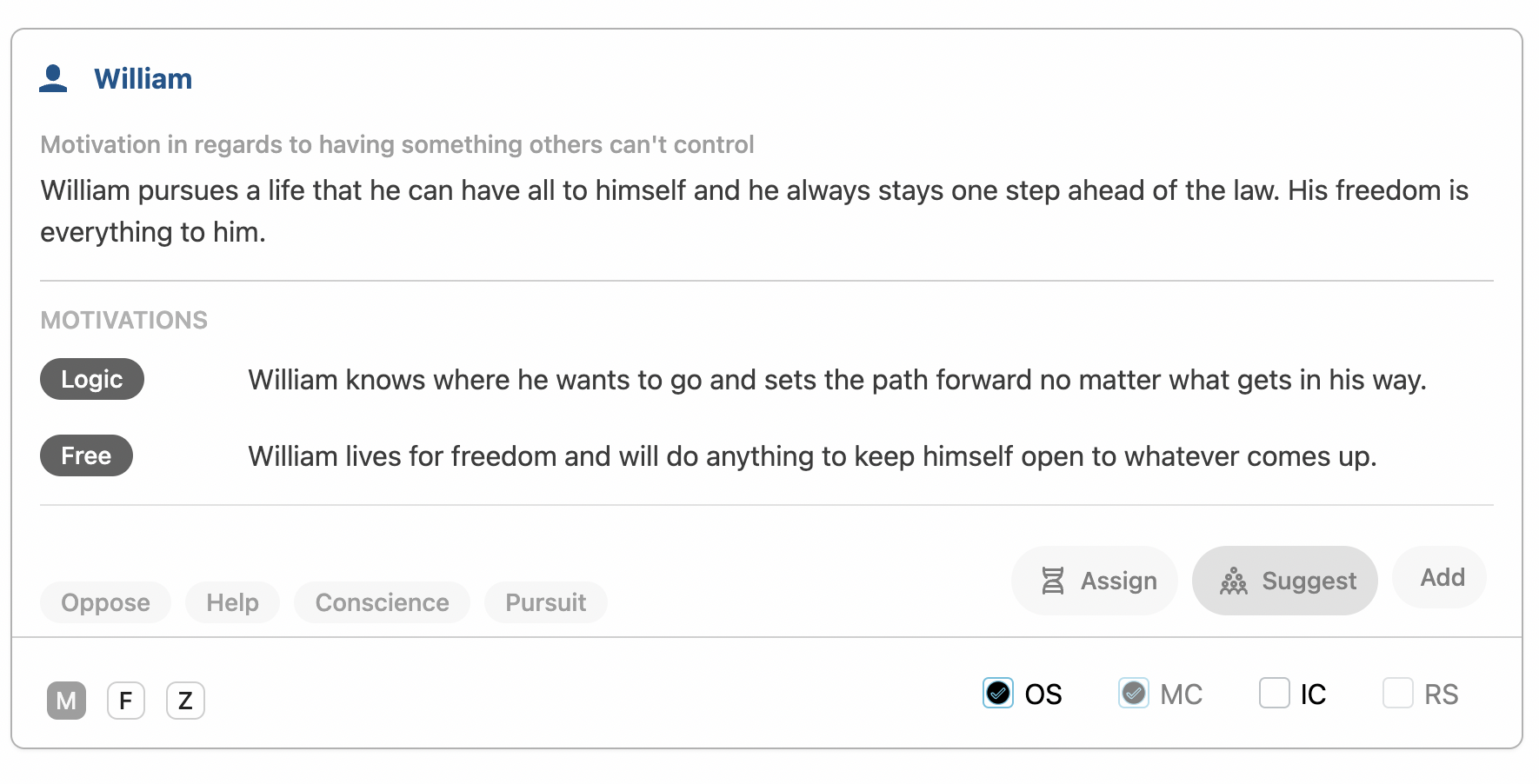 If Subtxt finds that you've already accounted for all the Motivations needed for a complete story, you'll be notified with a gentle encouragement to move on to the plotting and writing of your story.

If you are comfortable and familiar with all 64 Motivations present in the current model of story, you can add them manually by tapping on the "Add" button. 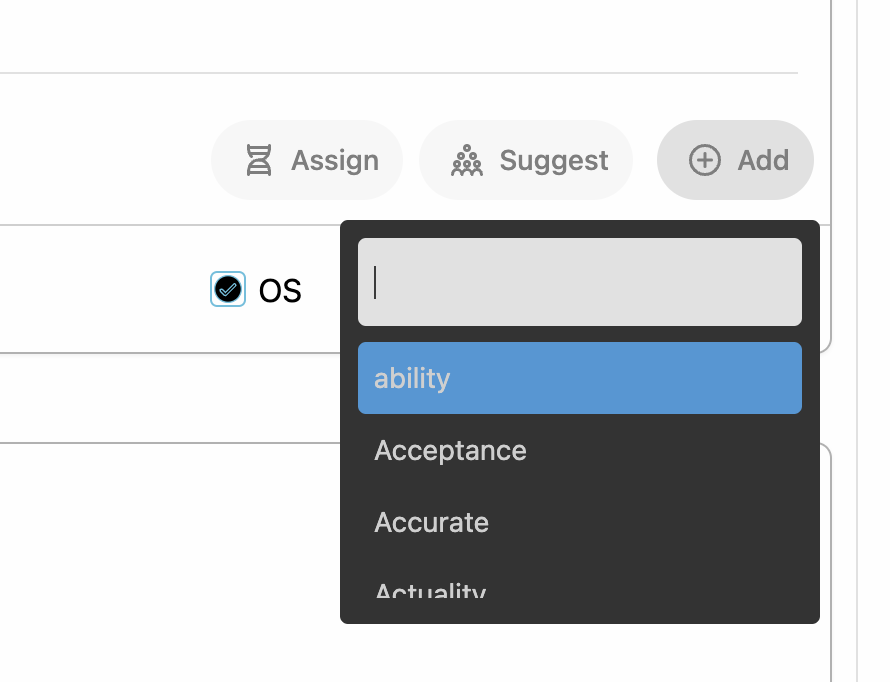 You can either type the Element in directly, or scan through the list and pick the most appropriate one for the current Player. Once added, you can illustrate just as you can with the AI assignment and suggestions.

Note that ALL 64 Motivations are available in the dropdown manual selection. Unlike previous applications, Subtxt does not make a distinction between Motivations, Methodologies, Evaluations, and/or Purposes. For the purpose of crafting a functional and practical understanding of the Objective Story Throughline, all the Elements at the bottom of the narrative model function as Motivations.

​Some of these Motivations, when combined into the same Player, create what is known as an Archetypal Character. For example, Pursuit and Consider make a Protagonist, Avoid and Reconsider make an Antagonist, and Help and Conscience make up a Guardian. ​ ​While these are certainly great learning tools, when it comes to applying practically to a story they usually end up too reductive and too constricting to be of any use to the typical writer. Their practicality is often tied to the Genre of the piece: the more fantastical the plot/world and the more general the character, the more you'll find Archetypal motivations (Star Wars, the Marvel movies, etc.). ​ ​If interested, you can learn more about these combinations in the Series of Articles from Narrative First entitled Archetypal Characters ​

If you're not completely sure how a particular Element works, tap the "Shuffle" button located to the far right of the Motivation Illustration. Subtxt will generate a random initial idea for you that you can then adjust as you see fit for your story. (Note: this Random Illustration is not AI generated). 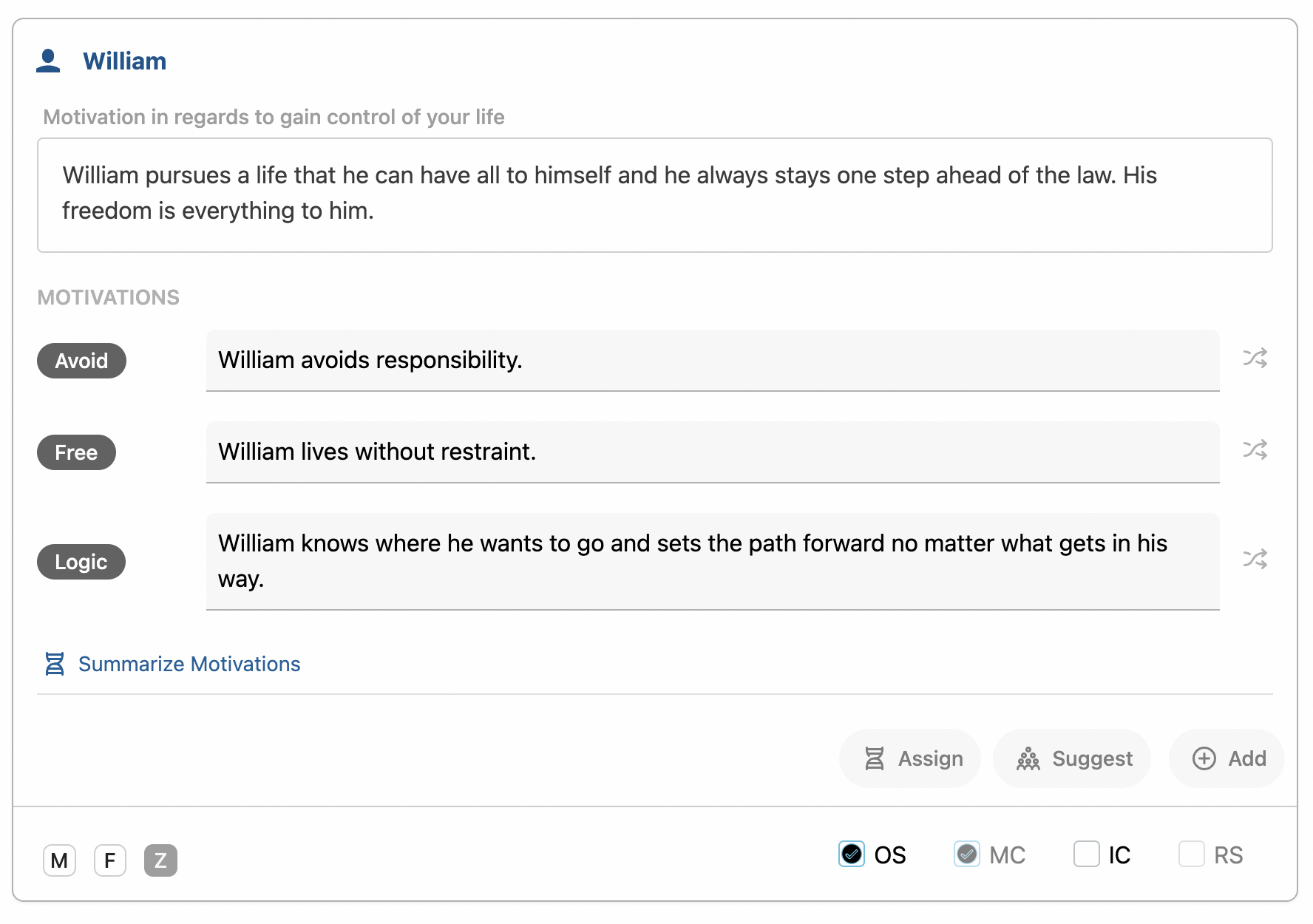 Identifying the Protagonist and Antagonist

In Subtxt, the Protagonist and Antagonist of a story are indicated by the Players driven by Pursuit and Avoid, respectively. 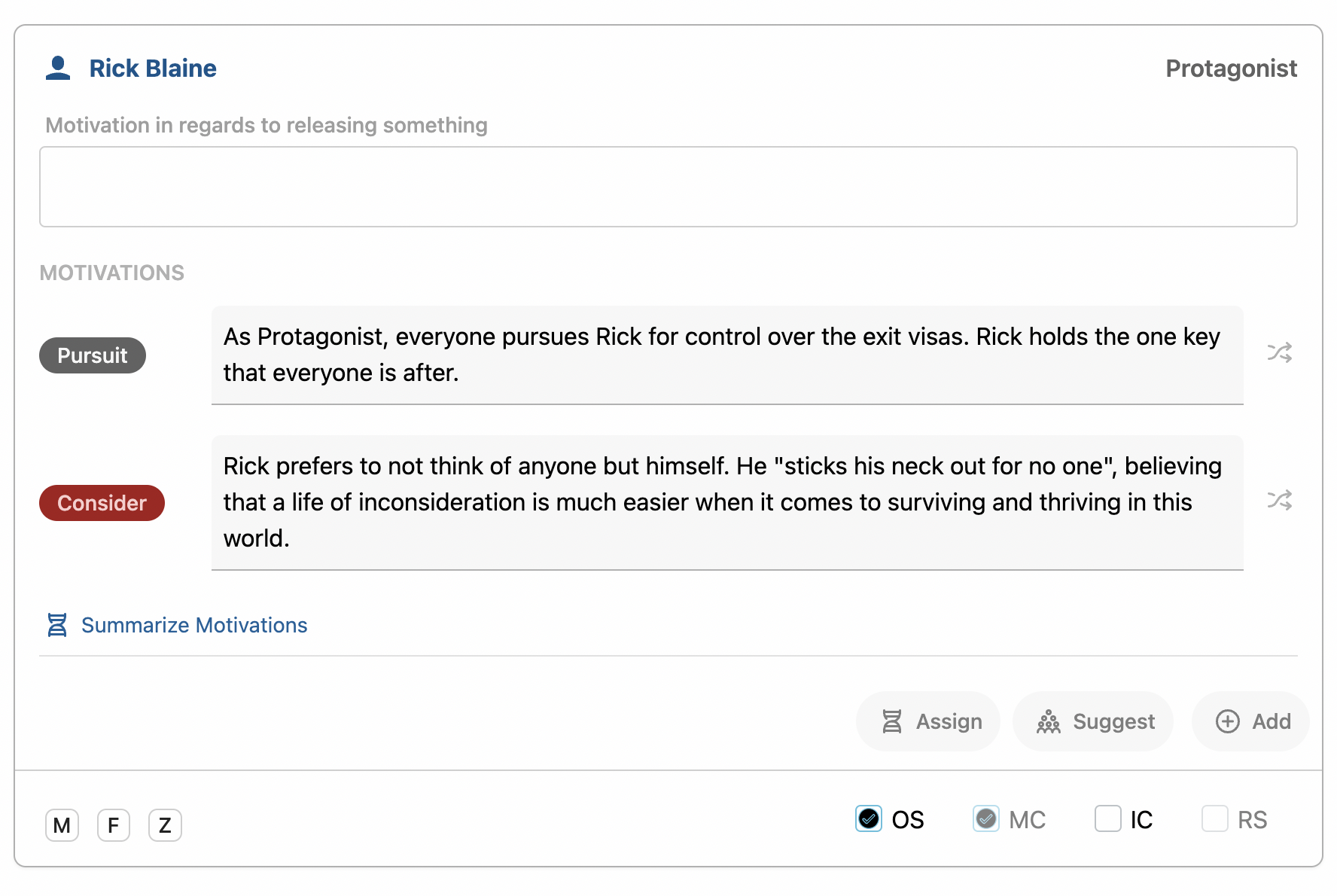 When you assign either Pursuit or Avoid to a Player (or have them automatically added when you assign a Player to either the Story Goal or Story Consequence), Subtxt indicates their new role in the upper right hand corner of the card. 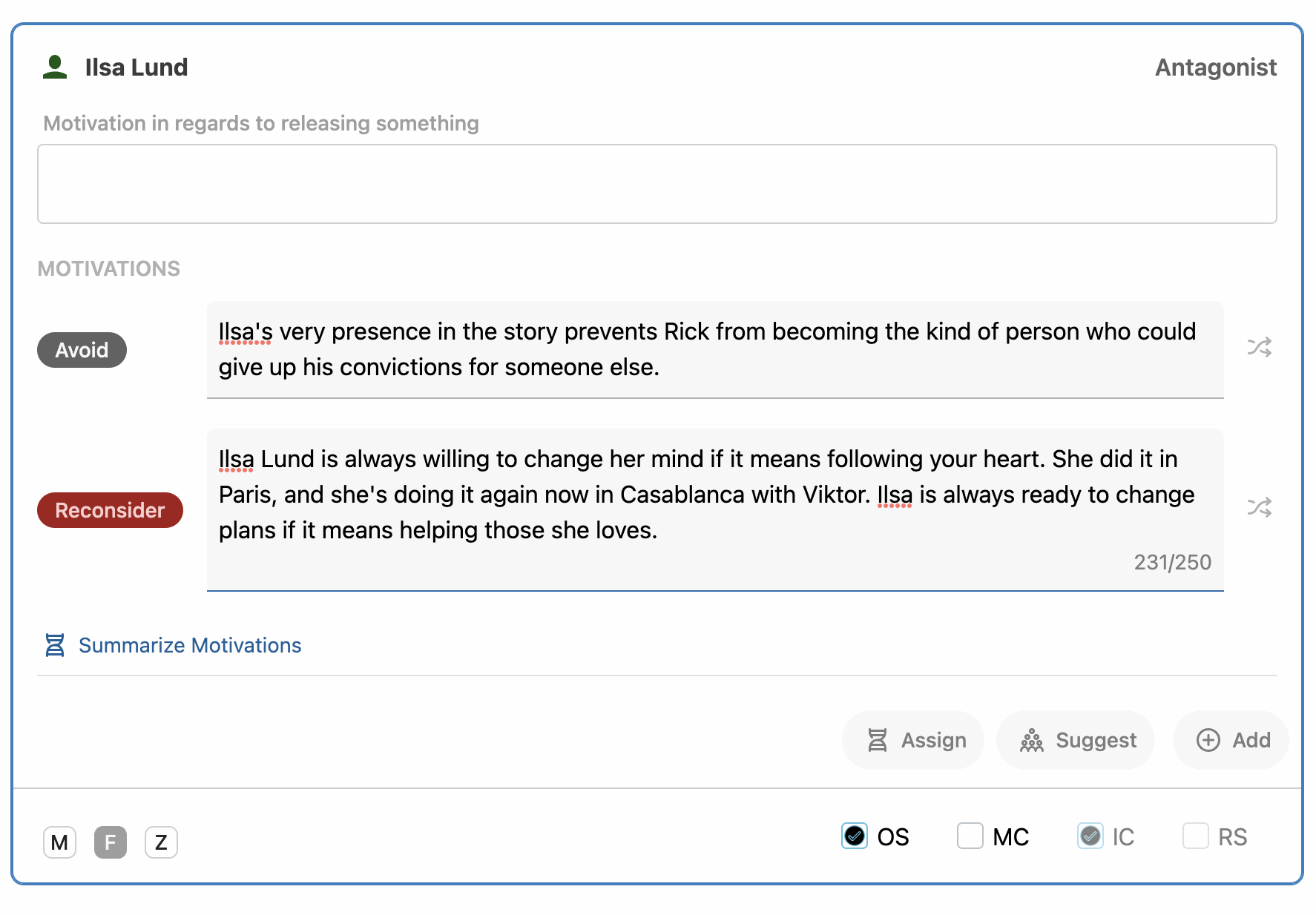 For example, many would consider Maj. Strasser the "Antagonist" of Casablanca. As evident in the card above, it is Ilsa that functions as the Antagonist of the story. Her mere presence is enough to prevent (or Avoid) Rick from releasing his control over the exit Visas.

Once you have your Elements all lined up, you can summarize them into a single idea by tapping the "Summarize Motivations" at the bottom. Subtxt will do its best to put all the Illustrations of the Motivations together along with the main Illustration you have at the top of the Player card. 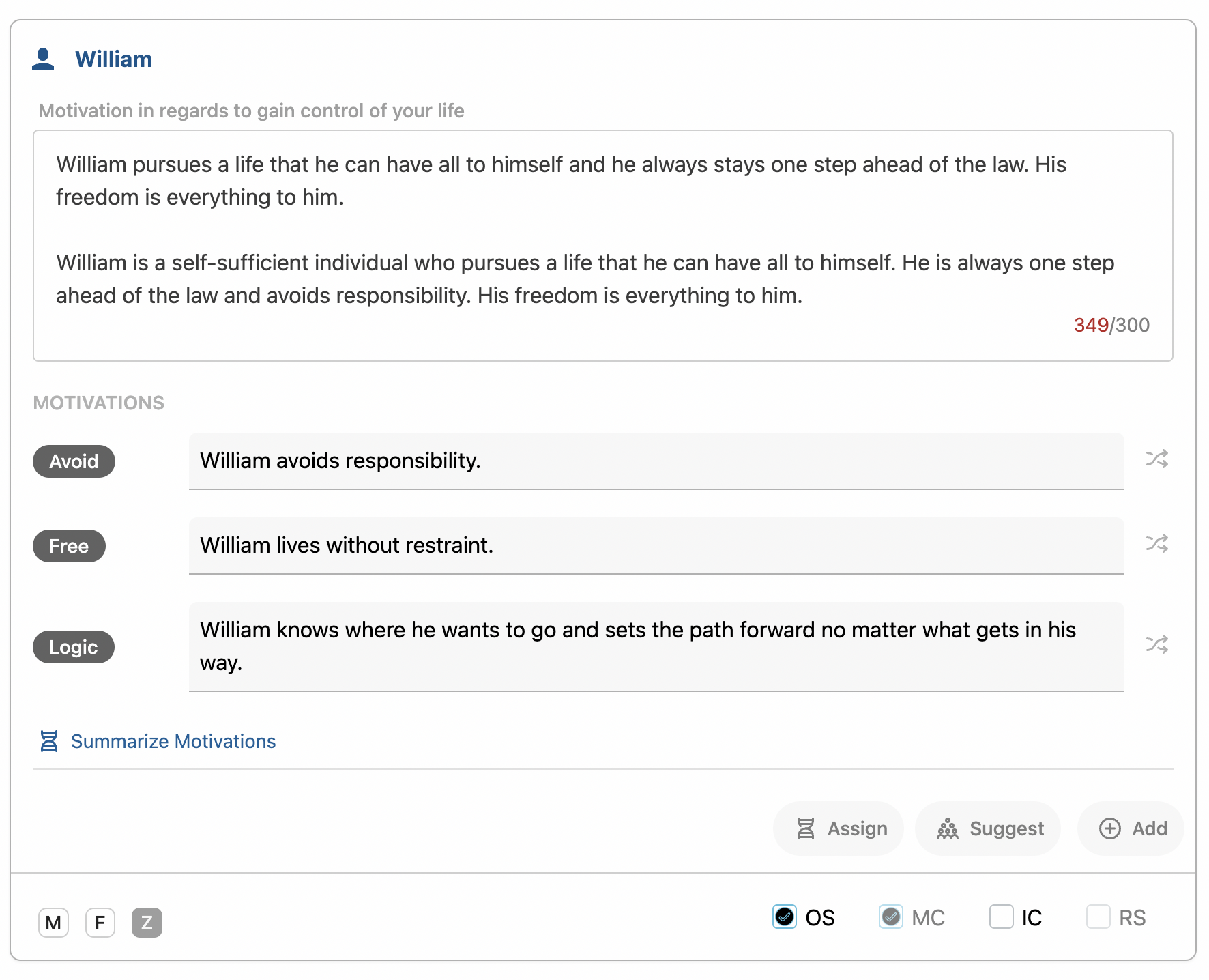 To keep from losing that main Illustration, Subtxt will append the new summarization to what you already have. You can either integrate the two ideas together, or leave both if you would like.

Make sure you keep the Player's Motivation Illustration below the limit (the character counter located in the bottom right of the Illustration box). Subtxt uses what you write here in the Player Card to determine how the Player will respond and interact with other Players in your Objective Story Throughline. If your Illustration is too long, Subtxt will discard the information and instead generate a random generic Illustration for your Player. 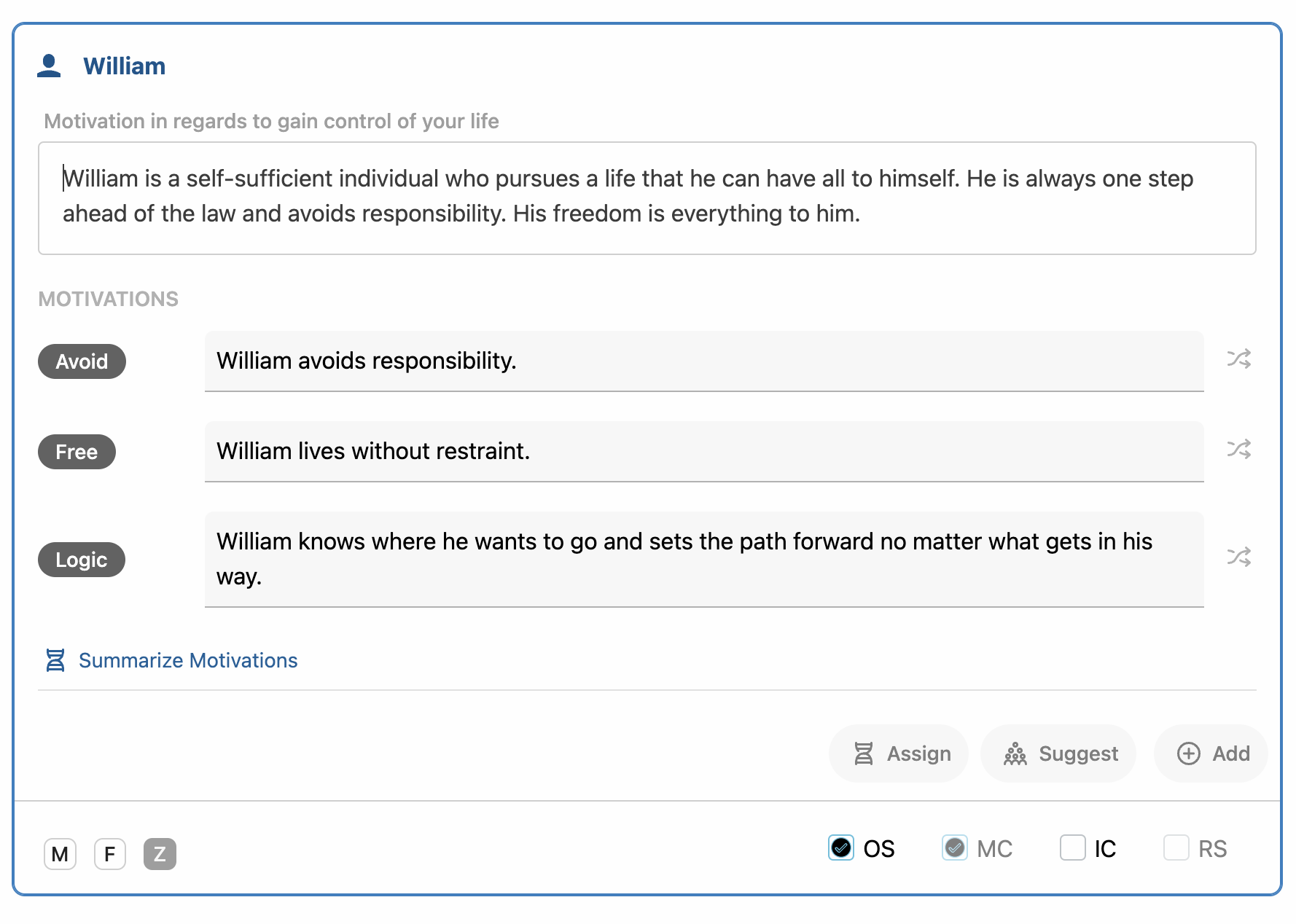 Note how in the above example, Subtxt AI added in the idea of William being "self-sufficient." This was not present in the original storytelling, but was an extension and inference from the Motivation of Avoid (avoiding responsibility by being self-sufficient). This is what it means to keep intact the integrity of a narrative structure while simulateneously allowing for serendiptious storytelling generated by artificial intelligence.