Methods in Subtxt are the processes and techniques by which the model of the Storymind works through a narrative argument. While sometimes labeled as something static or inert (the Past, the Present, Memory, etc.), every Method is a functional narrative engine, i.e. instead of the Past being something fixed, we think of that Method as Past -ing whereby the model functionally moves through a focus of the Past.

Illustrations are a means by which Authors may translate these Methods into Storytelling. Inspired by “gists” from Dramatica theory and improved through practical experience, Subtxt’s Illustrations bridge the gap between the artist (You) and complex narrative terminology (Methods). With an added community aspect, bolstered by expert curation, the ever-expansive collection of Illustrations in Subtxt guarantees a productive writing experience.

One of the biggest mistakes any writer can make while developing a story with the Dramatica theory of story is to use these Methods as direct objects of storytelling. Narrative Methods are VERBS, not direct objects, and certainly not nouns. If you find yourself twisting the meaning of a Method such that the Illustration treats it as an object, rather than a process, know that you're diluting its effectiveness within your narrative.

Throughout Subtxt, you will find two areas where you can interact with Illustrations: a General understanding of an Illustration, and a more Story Specific representation of a particular Method.

In the example above, you can see how William is tasked with Doing in a Transit from the Objective Story Throughline plot. Doing as a Method can take on many different forms as it simply refers to "engaging in a physical activity."

Not only does this draw us closer to imaginative and unique Storytelling, but it also clues Subtxt AI into a better understanding of your story when compared to every other story out there in the world. Feel free to use this area as much as you want to customize your story-building experience with Subtxt. 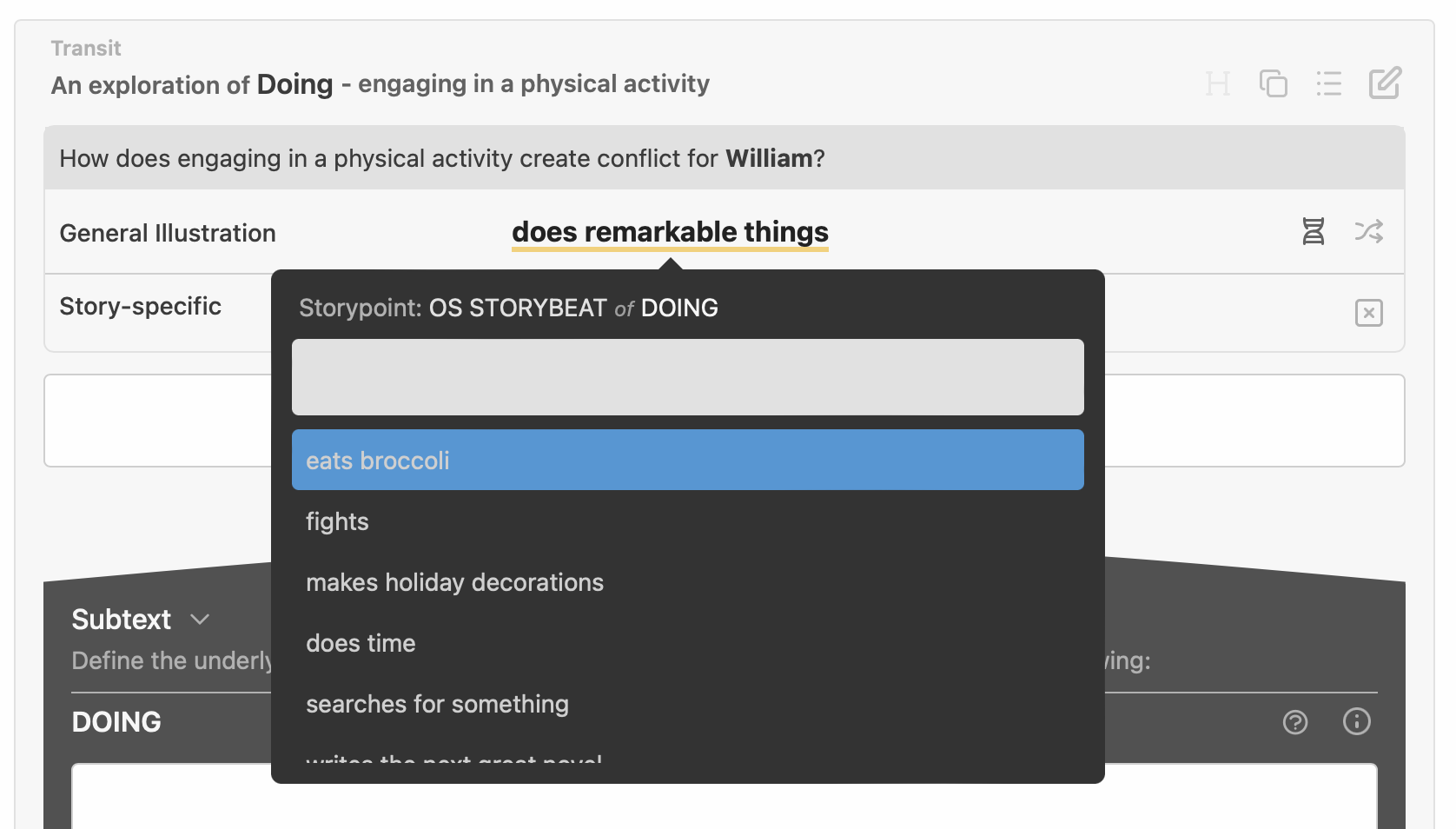 If you can't find a General Illustration that connects with your story, you can Submit an Illustration for approval. 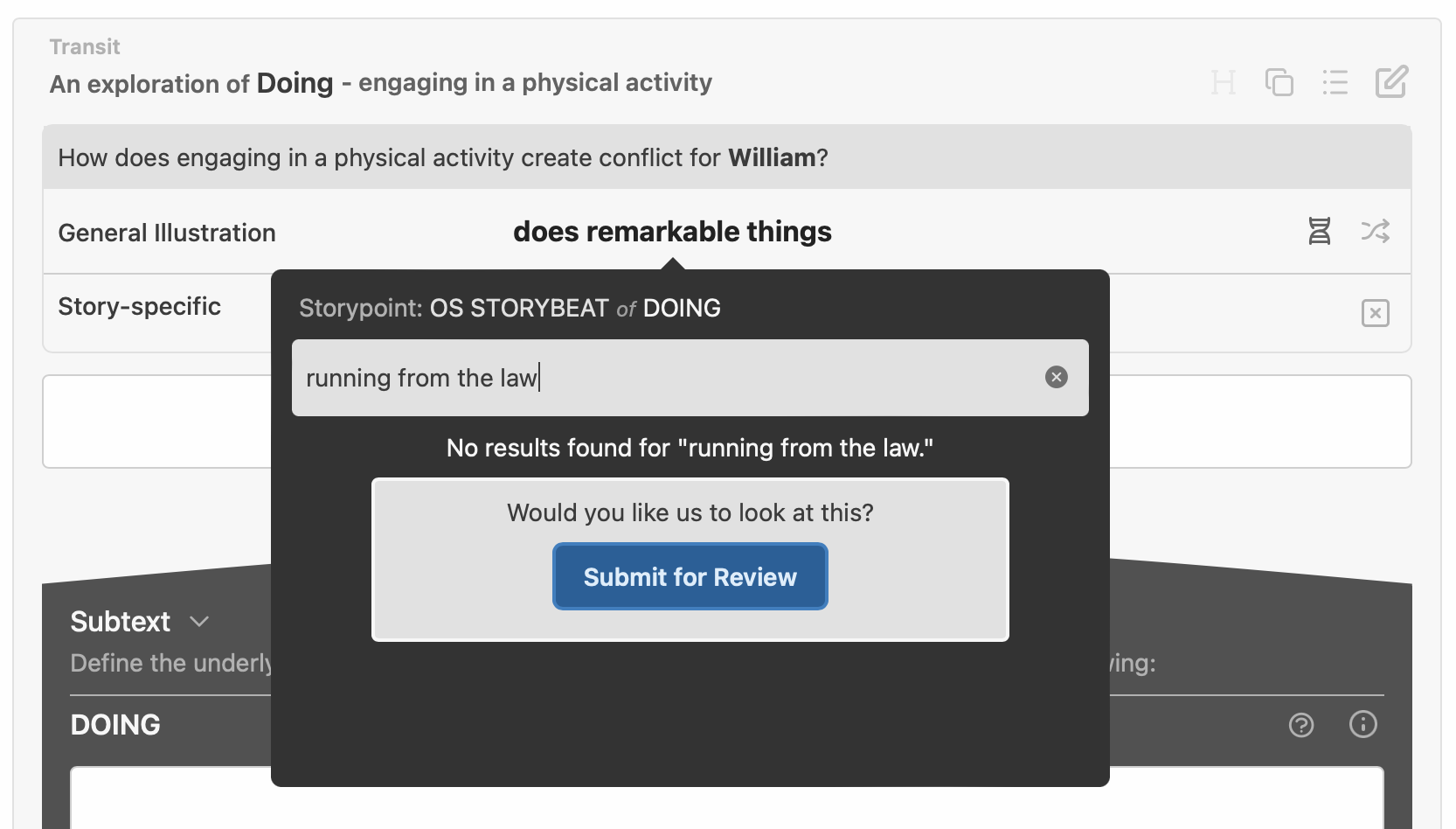 The key component of Subtxt’s Illustrations is community. By submitting candidates for possible introduction into the global library, Subtxt’s writers improve the collective understanding and effectiveness of this approach to storytelling. 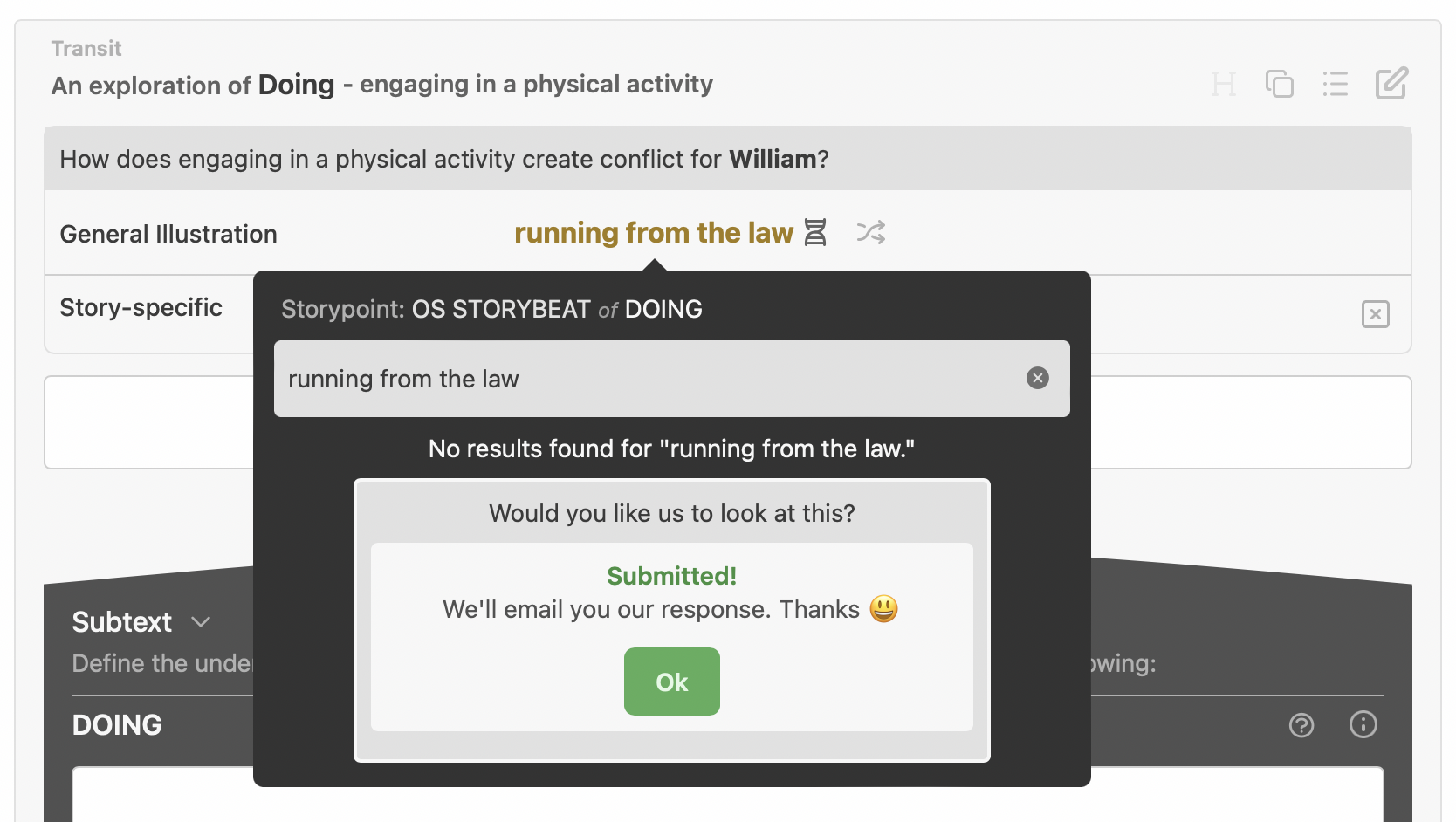 Once submitted, Subtxt notifies our staff of your suggestion. Until we review your submission, your temporary General Illustration will appear as gold within your application.

When inventing a new Illustration for a Method, make sure it takes into account its Parent method. Everything in Dramatica theory is relativistic. While "killing someone" might seem like a legitimate Illustration for Ending, looking at its Parent Methods proves otherwise. It would be difficult to justify "killing someone" in the context of either Enlightenment (in Physics), or Fantasy (in Universe). This works the opposite way too: Parent Methods should somehow relate to the Children Methods beneath them.

An Opportunity to Learn

While you can easily skip over the Submission process by entering your Illustration directly into the Story Specific box, you should think of the General Illustration Submission as an opportunity learn more about how these Methods work in narrative.

Whether approved or denied, you will receive an email notifying you of our decision. If denied, we will often cite the reason why and explain what would have worked better and even suggest alternative Illustrations. 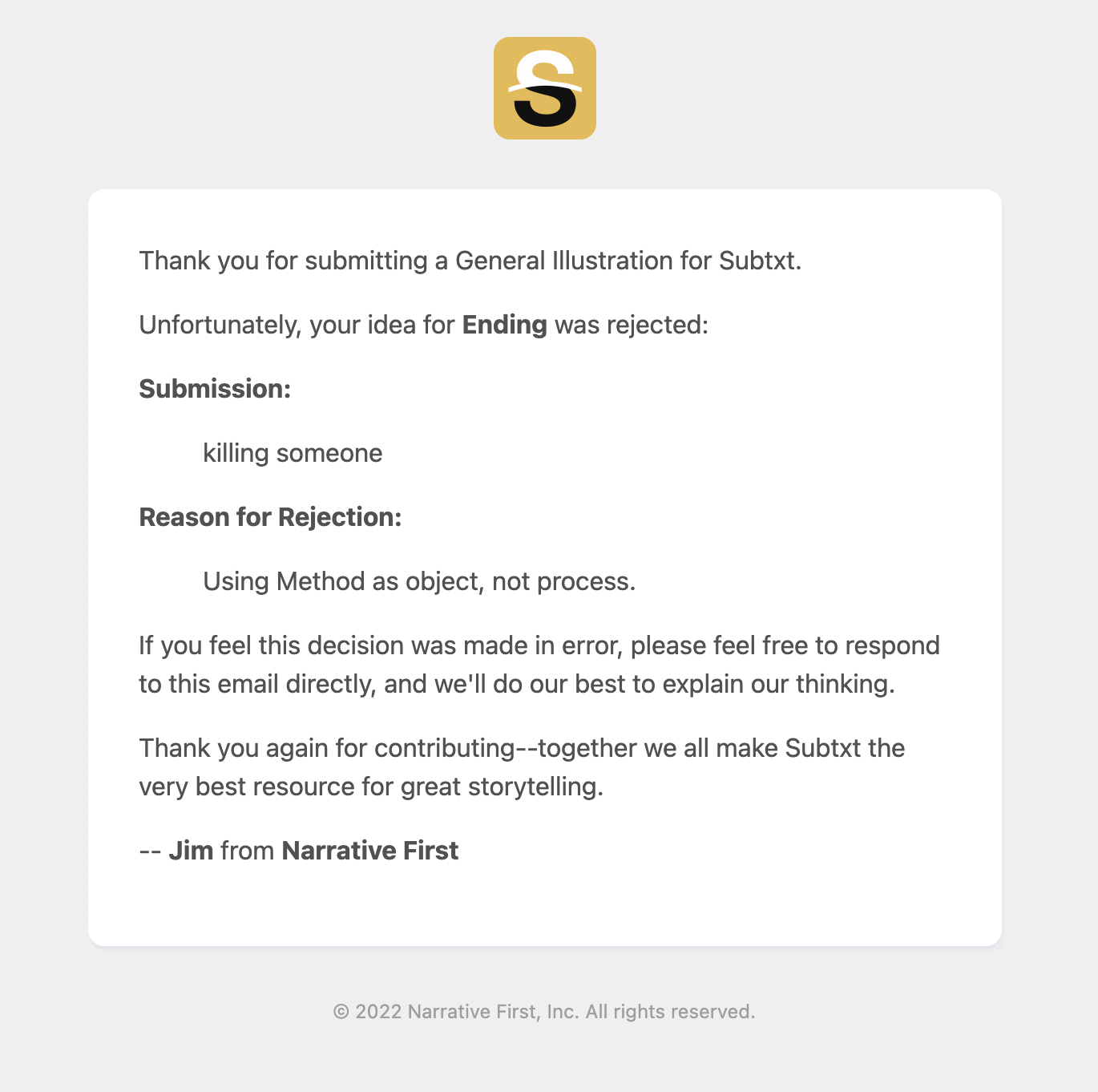 As mentioned before, community is a key aspect of Subtxt’s mission. Beneath the master list of Illustrations and the suggestion box for new entries you will find a list of recent approvals and rejections for that Method. By opening the results of the approval process to everyone, the entire community can take advantage and learn from the most recent developments. 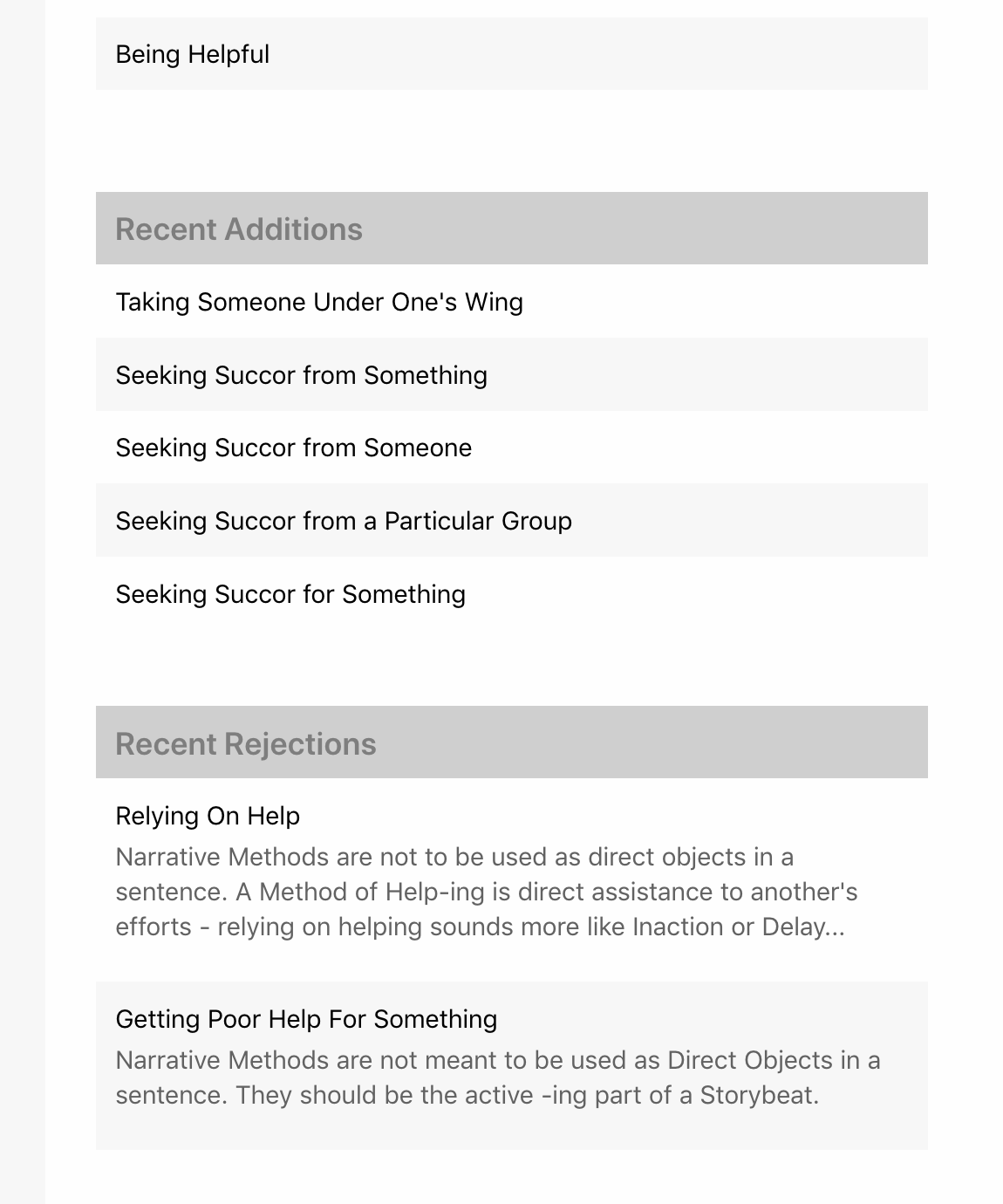 The rejection list includes the reasoning behind the denial, in the hope that this will act as a prime learning opportunity.

(They, of course, remain anonymous)

You’ll find the complete library of Illustrations listed below every Method: 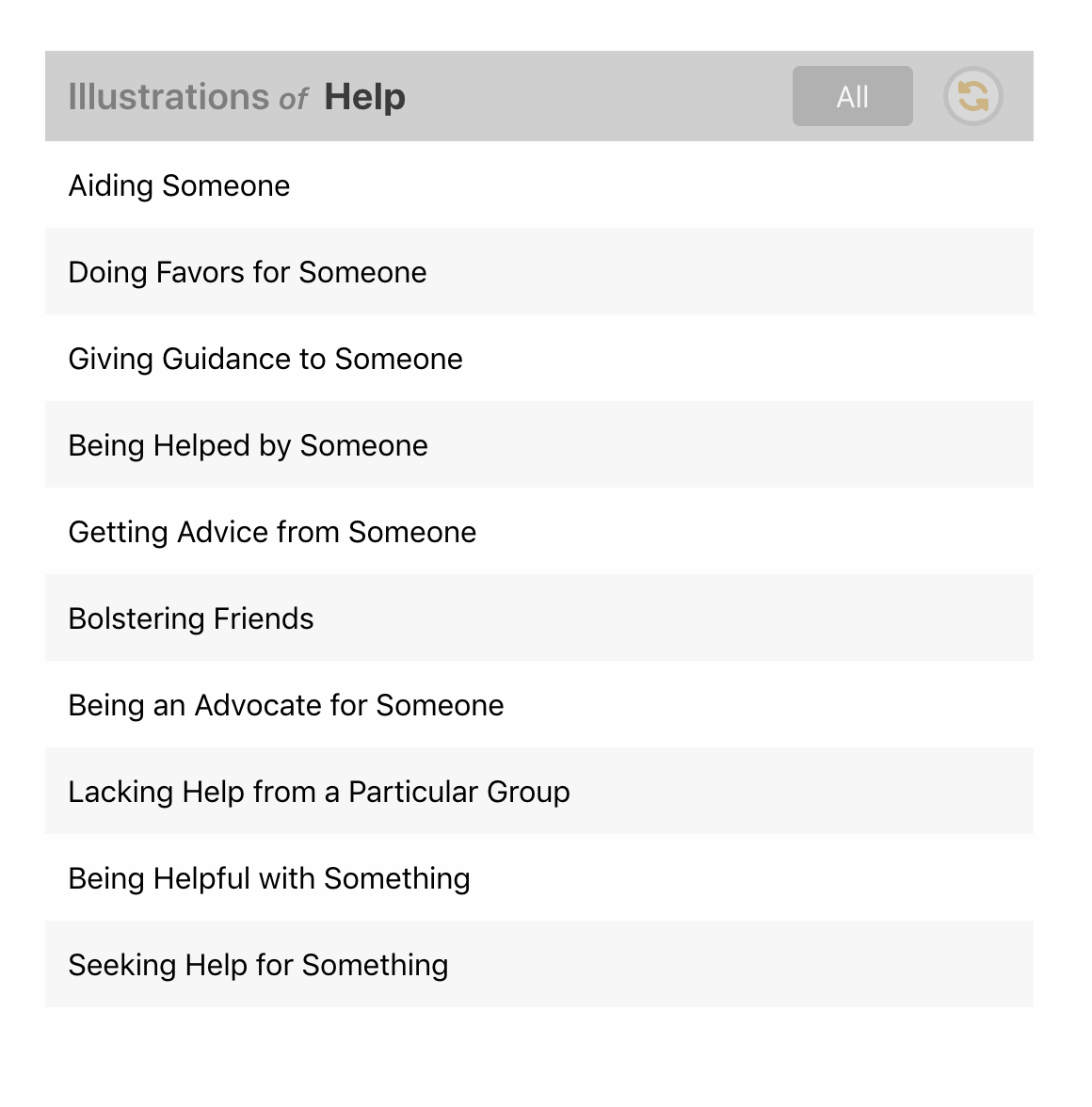 The Master List of Illustrations for a Specific Method

Each Illustration represents a close approximation of narrative structure. While definitions exist for each Method (found at the very bottom of every Method), these different versions allow for an improved understanding of the intent behind each narrative function. By offering a wide range of possibilities, the Author scans the collection and infers the meaning of the Method, rather than focusing on the Method itself.

Tap the All button to open up the entire collection, and the Shuffle button to juggle the current set.

When considering a specific Method for writing, allow yourself to take in a set of Illustrations. Feel the intent behind the group. Then shuffle the set, and repeat. Continue this until you recognize the essence of what is being asked by this Method.

General Illustrations of Methods range from Too Little to Too Much, and everything in-between. A Narrative Method of Conscious can be:

To help writers understand the breadth of possibility when writing with purpose, Subtxt categorizes Illustrations into these three categories. You can find them sectioned off in the master list of Illustrations for each Method. Tap All to see their positive (Too Much) and negative aspects (Too Little). 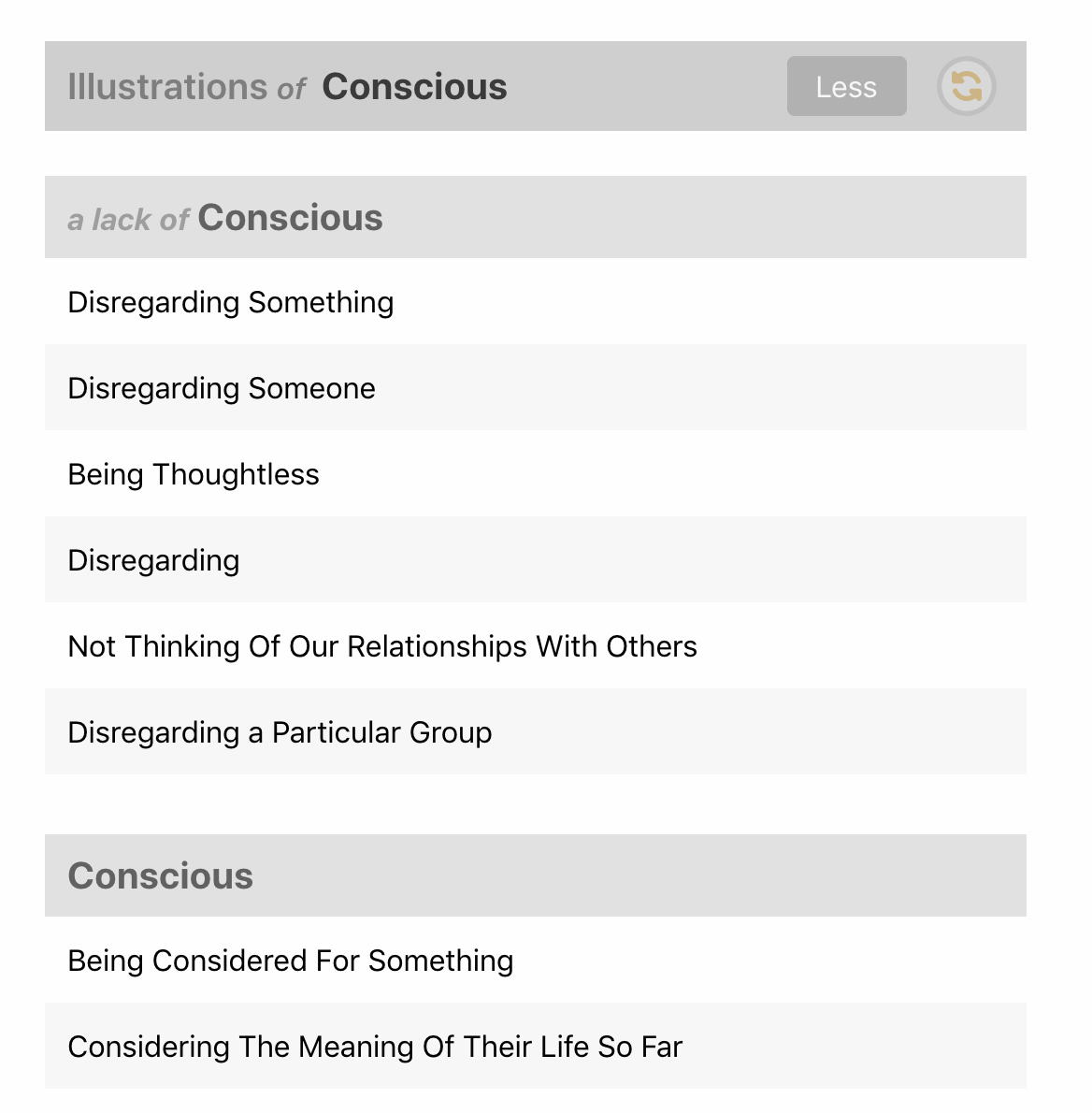 A Wide Range of Illustrations

Note that none of these Illustrations use the phrases "trying to" or "struggling to" when elaborating on a Method. Know that whenever you speak of conflict in these terms, your subconscious is keeping you from truly writing about what is problematic or inequitable.

Beneath the list of Illustrations on every Method’s page lies an entry form for suggesting new entries. Simply type in your idea and hit Submit. Subtxt’s team of experts will be notified and will start the approval process.

Submitting an Illustration on a Method Page

Note that Subtxt’s intelligence system automatically updates Illustrations for use in every context. You don’t need to submit an entry for “climbing a mountain” and “climbs a mountain.” Subtxt will take care of all that for you.

When submitting ideas for Illustrations, try to keep them as general as possible. You may be writing a story about “climbing Mt. Shasta,” but the rest of the community benefits without the specificity. If you do suggest an Illustration with too much detail, we may approve it—but will generalize the result to best suit everyone.

Once approved, your Illustration will appear in the master list for that Method. If denied, an email will be sent to your account explaining the reason for the rejection.

The Latest and Greatest

If you would like to keep up-to-date on the latest additions and rejections to the Subtxt library, visit the central Methods page (tap Methods in the sidebar), and tap the gold Latest Illustrations button in the upper right hand corner.

Subtxt finds the latest group of Approved Illustrations and Rejected Submissions. Tap on View to see the most recent updates. The Rejections include the reasoning behind the denial. 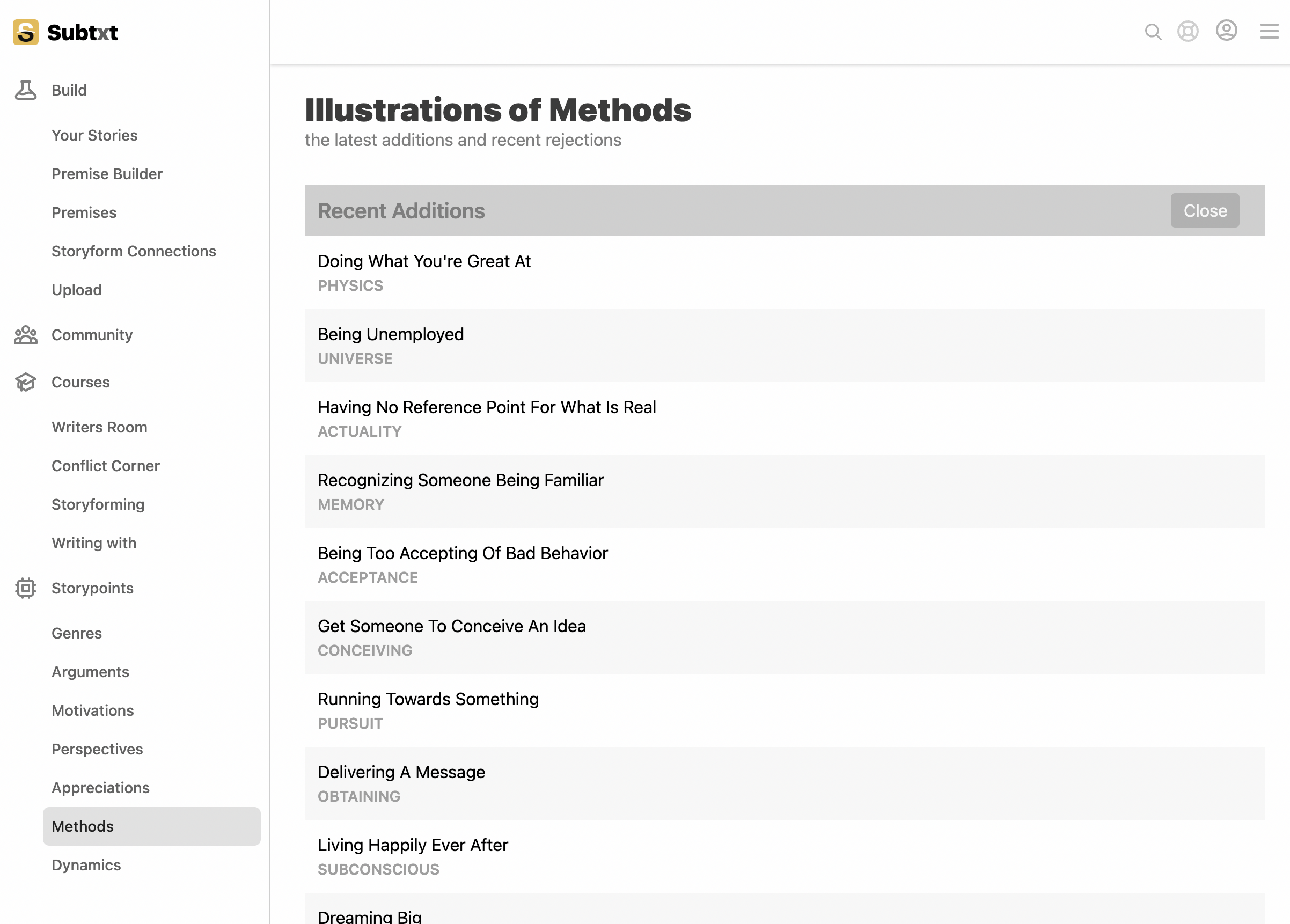 The Latest Additions and Rejections

Methods are micro-engines of story: they must describe a process.

While this rule of Illustrations as verbs works for almost all cases, there are some Illustrations that use the Method as an object, yet still maintain the transitory nature of a Method in process.

Illustrations as Objects that Work

The following is a short list of Illustrations as objects that have been accepted into the library:

In all of these, the Method--while presented as an object--still functions as a process. Adding "-ing" to the end of a Method can help in the visualization of a proper Illustration.

Illustrations as Objects that Don't Work

The following is a short list of Illustrations as objects that don't work. In addition to failing to meet the "-ing" test, these failures often end up referring to a different, more appropriate Method.

Our years of running Subtxt as a service helped us identify key "starters" for Illustrations. You can usually never go wrong with:

Switching Illustrations in the Middle of a Story

Subtext (the Storyform) drives narrative; Storytelling sits on top and communicates this structure to the Audience. As the difference between these two is often elusive to Authors in the midst of writing a story, many storytellers find themselves confused over how the two relate to one another.

For example, the following is a question in regards to illustrating the Story Goal:

Could a Story Goal of Conceiving, wherein the desired outcome is for the characters to "conceive of a new way to live" end up being an objective Success, even though what is actually achieved is, say, "getting the wrong idea"?

The Story Goal--as with all things Storyform--is not known to the Players, but rather, the Author. If you have set up the Players to be motivated towards a Goal of Conceiving with an Illustration of "conceiving of a new way to live", yet somehow it ends with "getting the wrong idea" then the question you need to ask yourself is: is this the Goal you wanted to write all along?

If you find yourself shifting Storytelling like this, it's often a sign that you have yet to define that Storybeat, Storypoint, or Story Dynamic in a way that is consistent and integral to the argument you are making with your story.

The Storyform and You ← → Gender and Narrative Theory