Physical Sex and Mental Sex are fixed and static (structural); Gender Identity and Gender Preference are fluid (dynamic). This is why you'll find some who switch identities day-to-day, find themselves attracted to one or both genders, and turn around and flow into something completely different the next day.

Physical Sex is fixed and set at birth. You can modify your physicality through surgery and switch it from one sex to another.

Mental Sex is fixed and set at birth. While we can't currently modify this boot record of our mind permanently the way we can with our physicality, we can alter it by numbing the filter through pharmacology.

Gender Identity and Gender Preference work on the fluid axis of the narrative quad, i.e. it can be difficult to determine where one stops and the other begins. The Sex axis is easy to differentiate: Physical is External, Mental Sex is Internal. The Gender axis is where many find themselves floating back and forth.

It's also where many confuse the way they think with their actual Mental Sex. 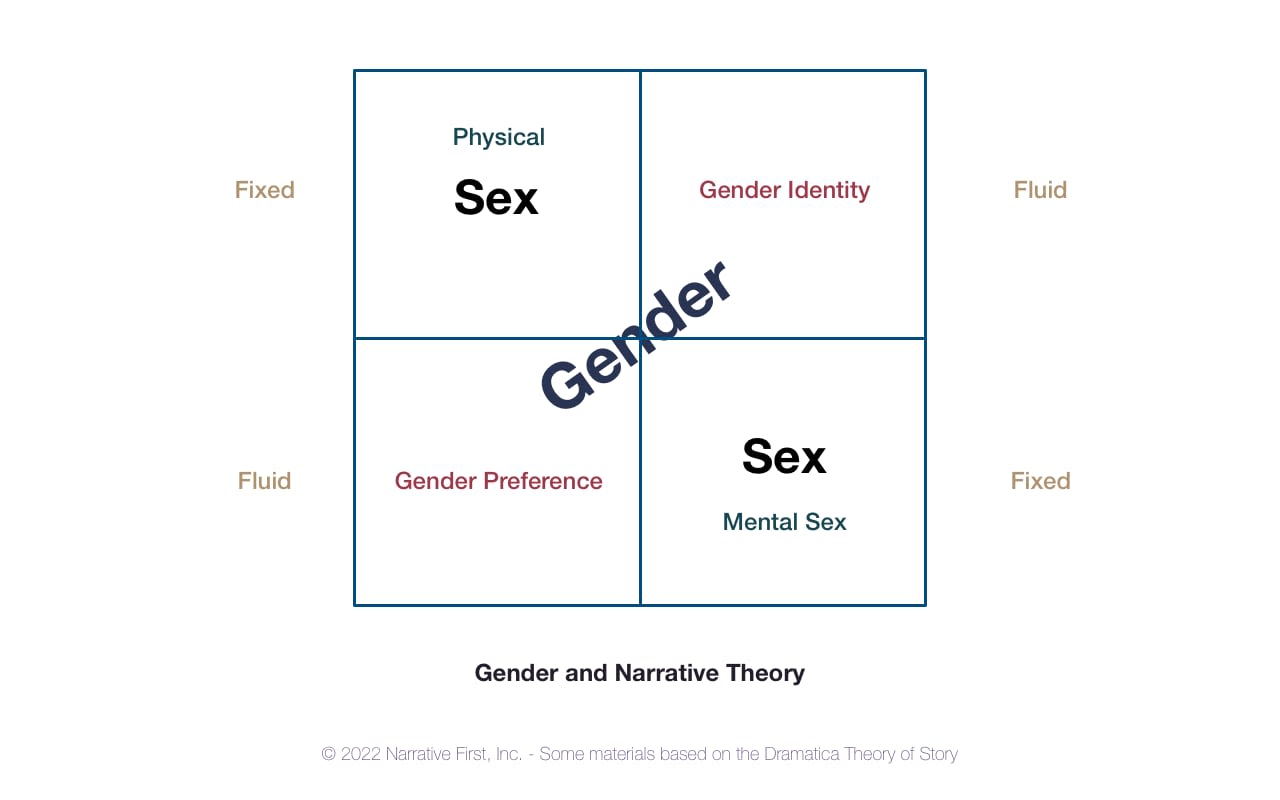 Subtxt and Dramatica theory tend to attract those who do not think in absolutes--this is a good thing. Unfortunately, a by-product of this ability to see everything is a blindness to that which is certain and fixed. Upon introduction to these concepts, many Male Mental Sex writers consider themselves Female Mental Sexed. They appreciate the difference between Linear and Holistic thought, and finding themselves attracted to the latter mislabel their mind.

That attraction, or preference, for Holistic thought is just that: a Gender Preference. The lower left component of a narrative quad in Dramatica theory is Desire. Whether that signifies a desire for someone else, or a longing for wanting that which is missing, it is still anchored in the area of Psychology.

Mental Sex is the Mind and what is thought. Gender Preference is Psychology and how one thinks.

The fallout from this confusion? Many Male Mental Sex writers with a preference for Holistic thought choose Female Mental Sex when developing the structure of their narrative. On the surface, there is nothing wrong with this approach or this decision. Storytellers are free to tell whatever story or manner of thinking they find themselves attracted to.

But they will struggle on an intuitive level when it comes to writing these kinds of stories as they simply don't have the personal experience and appreciation to flow with a narrative immersed in justification.

The answer? Select Male Mental Sex when constructing your narrative and then adjust the Storytelling and the experience of writing that story to match the abilities and preferences of the artistic drive within yourself.

There's a reason Gender is fluid and Sex is not. Male Mental Sex blends both the upper right (ability) and the lower left (desire) when appreciating both Gender and Sex. That's why it appears as something fluid and why many who are wholly Male Mental Sex might not even be able to differentiate between Gender and Sex (male is male, and female is female, male is linear, female is holistic).

This is where artifical intelligence stumbles a bit when telling a story.

A History of Association

Initial incarnations of Subtxt AI relied on this association of Physical Sex and Gender Identity to provide illustrations. Without a place to record a Player's Gender Identity, the AI would simply rely on thousands and thousands of years of written text to interpolate and appreciate what set of pronouns to use.

You can't really blame these language models. After all, if you're calling upon the entire knowledgbase of human history that on average (and cultural bias) thinks male is male, and female is female--you're going to run into some issues.

In order to account for the entire gamut of storytelling, Subtxt provides an option to set the Gender Identity of Players in your story (male, female, or non-binary). Male is M, Female is F.

Non-binary is marked Z to reflect the blend that occurs between both Gender Identity and Gender Preference.

Methods and Illustrations ← → The Mental Sex of a Story