Skipping down to the Illustrating section, this is where you get a broad overview of your story's structure. This section provides several key Storypoints crucial towards developing a great story. 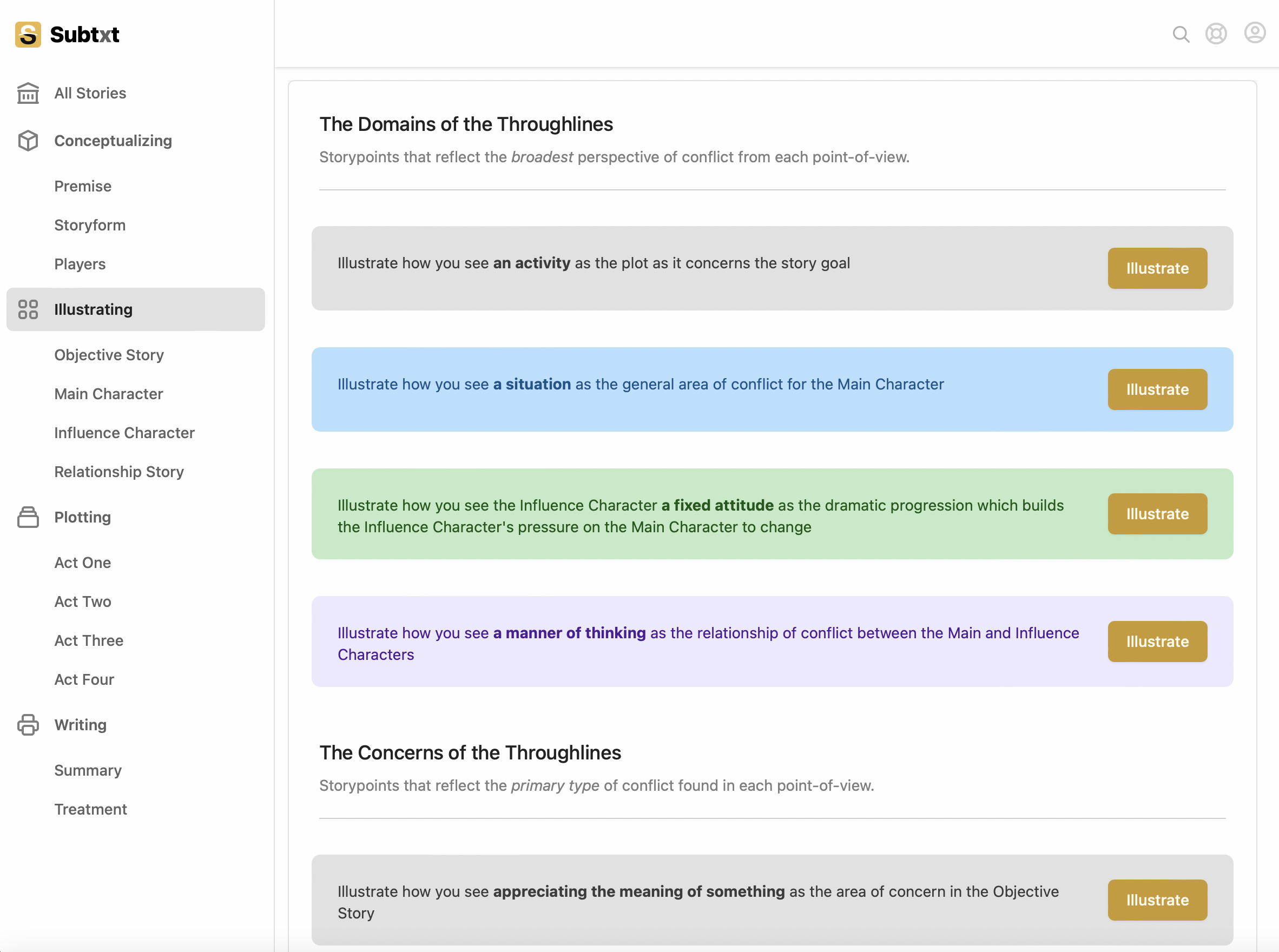 In practical terms, the way these Four Throughlines work in a story is:

At the heart of every complete story is a single inequity. This inequity is indescribable—if it were, we wouldn't need to go through the trouble of writing a story about it. Instead, we talk around inequity by taking four distinct points-of-view. By illustrating what the inequity looks like from these different perspectives, we communicate the essence of our story, and we lay the foundation for a meaningful Premise.

To Illustrate a Storypoint, click on the gold button labeled "Illustrate". When you do this, Subtxt will generate the appropriate Storypoint for your story. 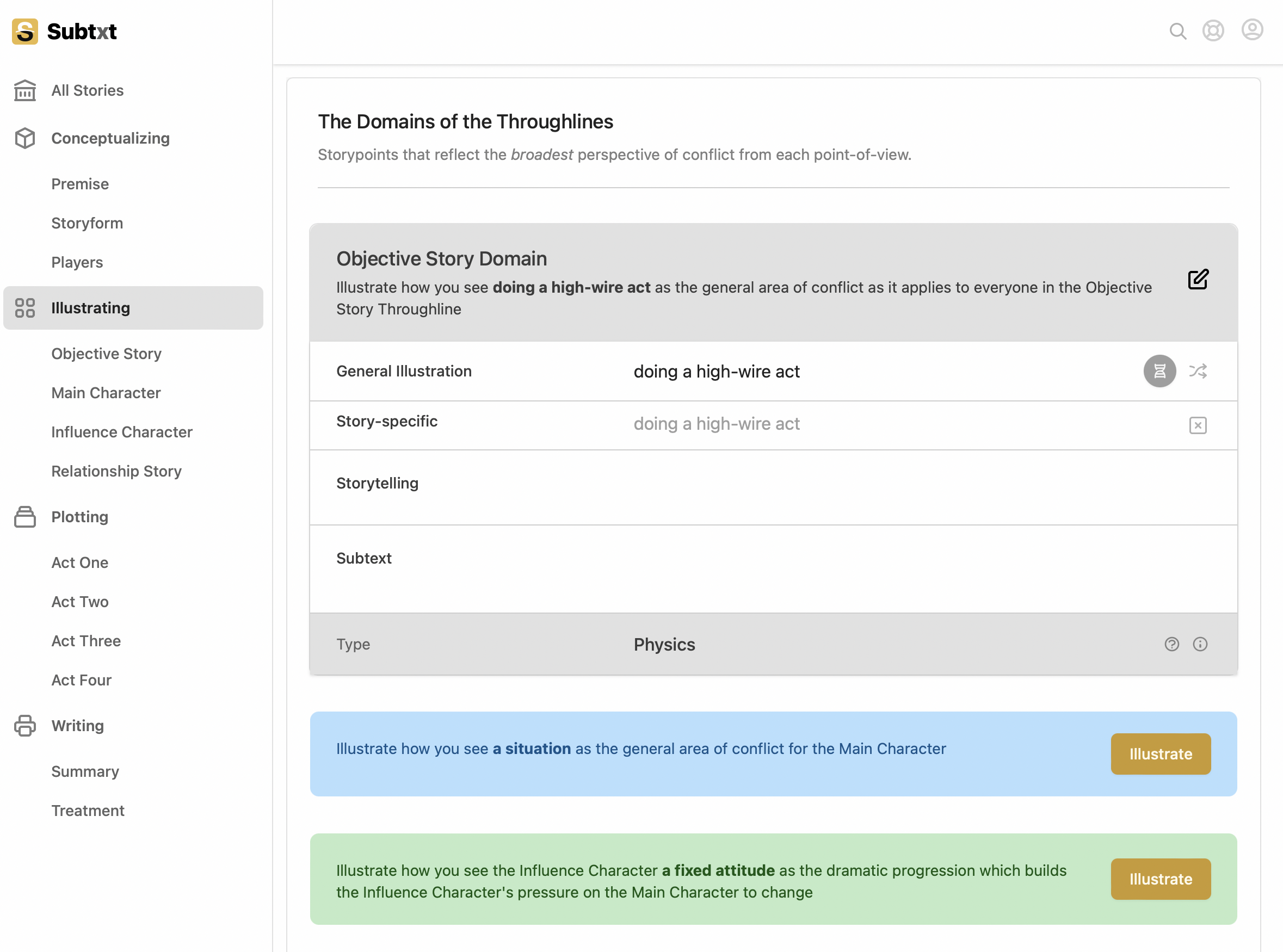 Generating a Storypoint in Subtxt

As you can see in the example above, clicking "Illustrate" created an Objective Story Domain Storypoint of Physics. What this means is that, from the broadest perspective, the conflict in this story's plot will center around physical activities (like running, jumping, kicking, fighting, etc.). As the example was based off the original film Aliens, you can see how an Objective Story plot of Physics clearly defines the kind of conflict one finds in that story (fighting and killing and surviving aliens). 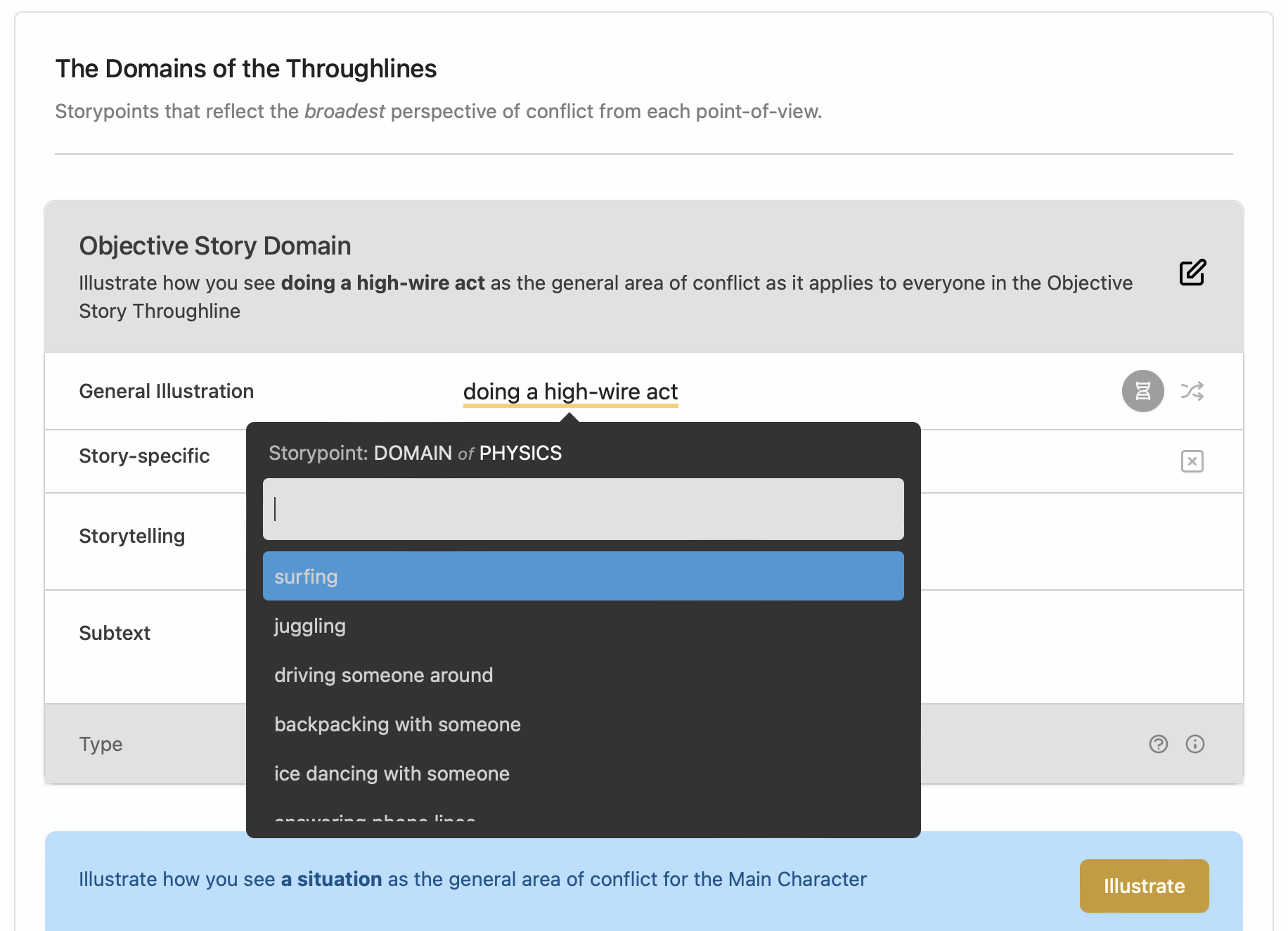 The dropdown that appears when you tap on a General Illustration offers several different possibilities for how you can illustrate this particular Storypoint. Subtxt keeps the thematic intent (subtext) of the Storypoint intact (in this case, an Objective Story Domain of Physics), but then shows how far you can branch off in the Storytelling of this Storypoint while maintaining the integrity of your narrative structure.

Note how "surfing", "juggling", "driving someone around", "backpacking with someone", and "ice dancing with someone" all convey possible conflict focused on problematic activities (Physics). Selecting any one of these will change the story--while maintaining the meaning of the narrative deep underneath.

If you can't find an Illustration that fits with your story, feel free to type it directly into the search box at the top of the Storypoint. 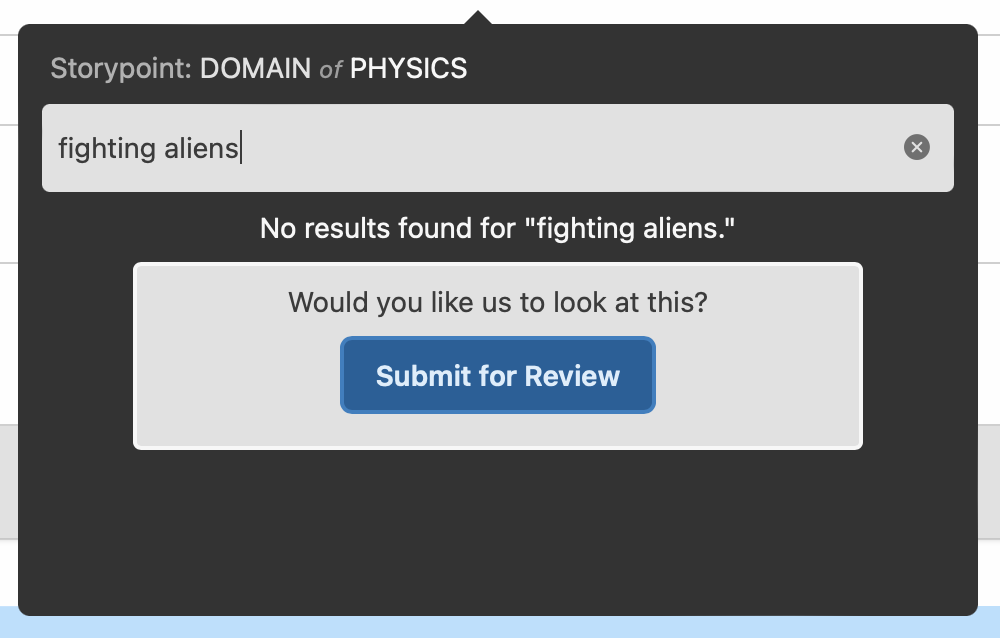 Submitting an Illustration for Review

Once Subtxt recognizes that you want to try something different, the app will ask if you want to submit this Illustration for review.

The review process for an Illustration is a win/win/win for writers everywhere. First and foremost, the review process is an opportunity to test your understanding of narrative structure and storytelling. If your submission is denied, the denial comes with an explanation as to why we made that decision. If you have further questions about your evaluation, you're encouraged to contact us. Teaching is at the heart of Subtxt, and we want to make sure everyone has an opportunity to learn.

Secondly, if approved your submission is an opportunity to contribute to the global collective of storytelling. Every accepted Illustration is made avaiable to everyone who subscribes to Subtxt.

If you would prefer to keep your storytelling private, you can always focus on Story-specific Illustrations instead. 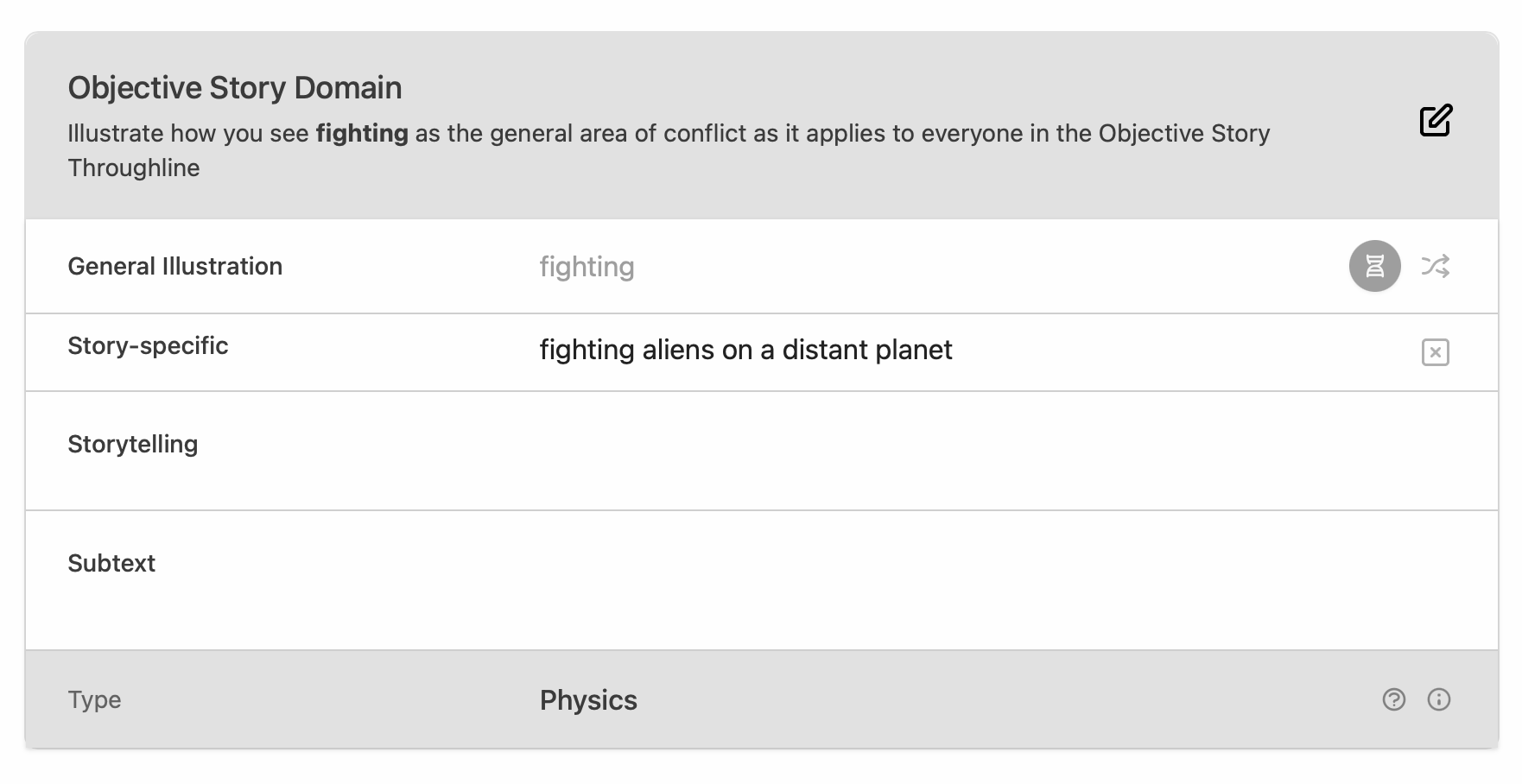 In the example above, I've taken the General Illustration of "fighting" and changed it in the Story-specific Illustration to read "fighting aliens on a distant planet."

Once you've determined either a General Illustration or Story-specific Illustration for a Storypoint, you can use Subtxt AI to help generate various ideas for how this would play out in your story. 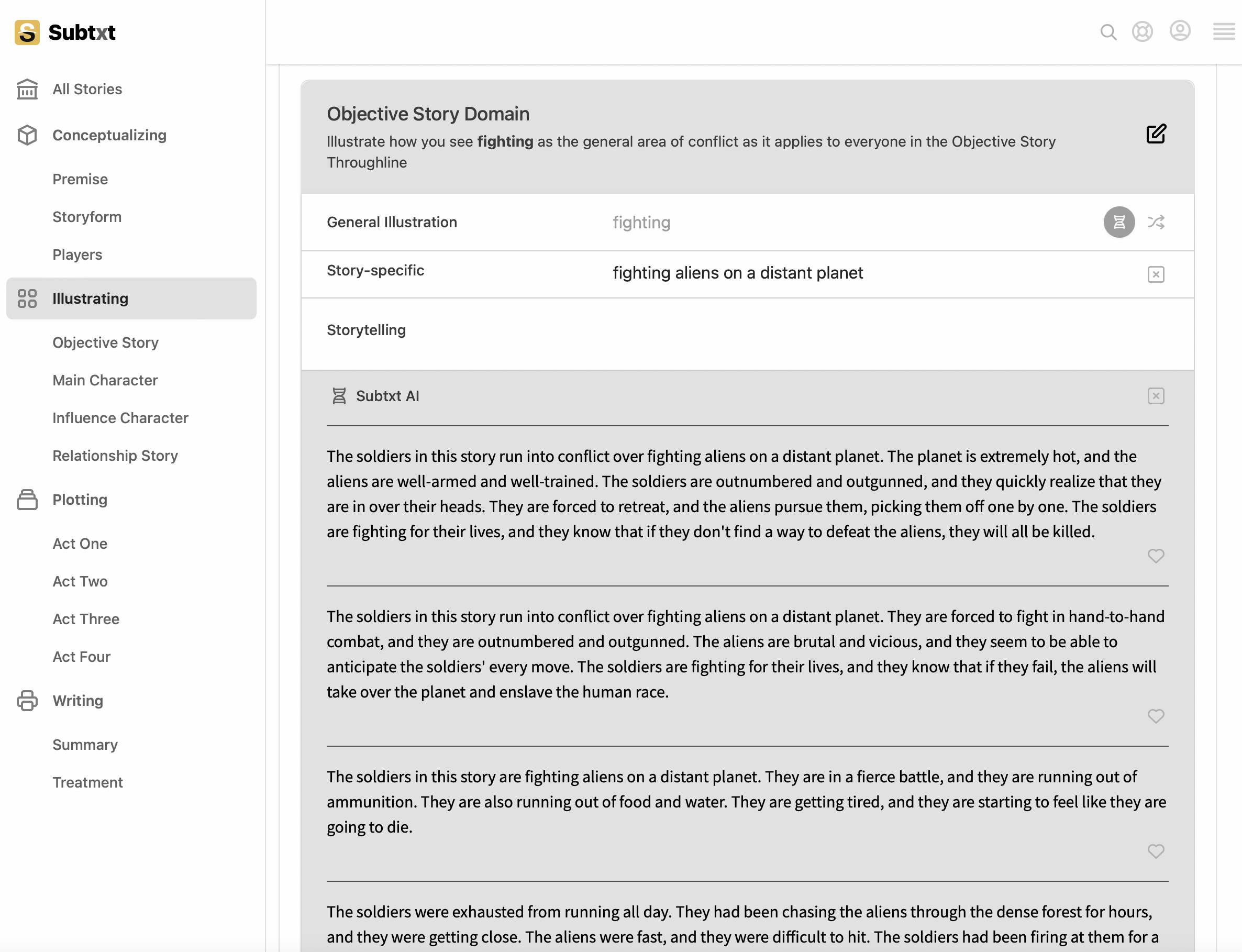 Often a great source of inspiration and creative brainstorming, the results from Subtxt AI can be used immediately to drastically improve the world of your story. Simply "like", or "heart", the storytelling that speaks to you and Subtxt will record them in the Subtext section of your Storypoint. 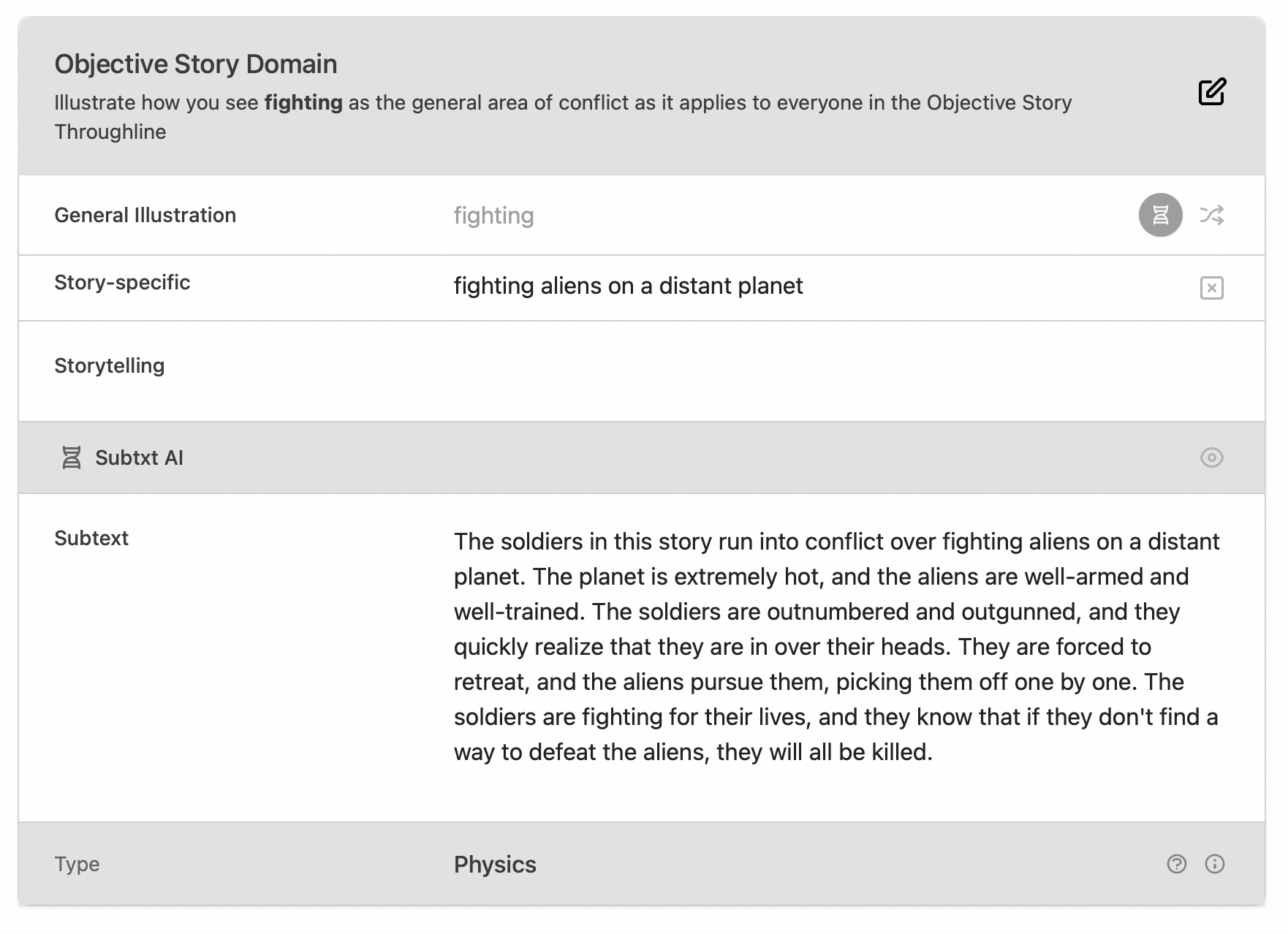 Recording a Result from Subtxt AI

If you want, you can expand on these ideas in the Storytelling section of the Storypoint card or you could just leave them the way they are right now. Subtxt will intelligently "read" your Storypoint card to grab the most relevant data when building out the rest of your story...

...which leads us to the next step of Illustrating Throughlines: Building Out The Rest of Your Story. 😊 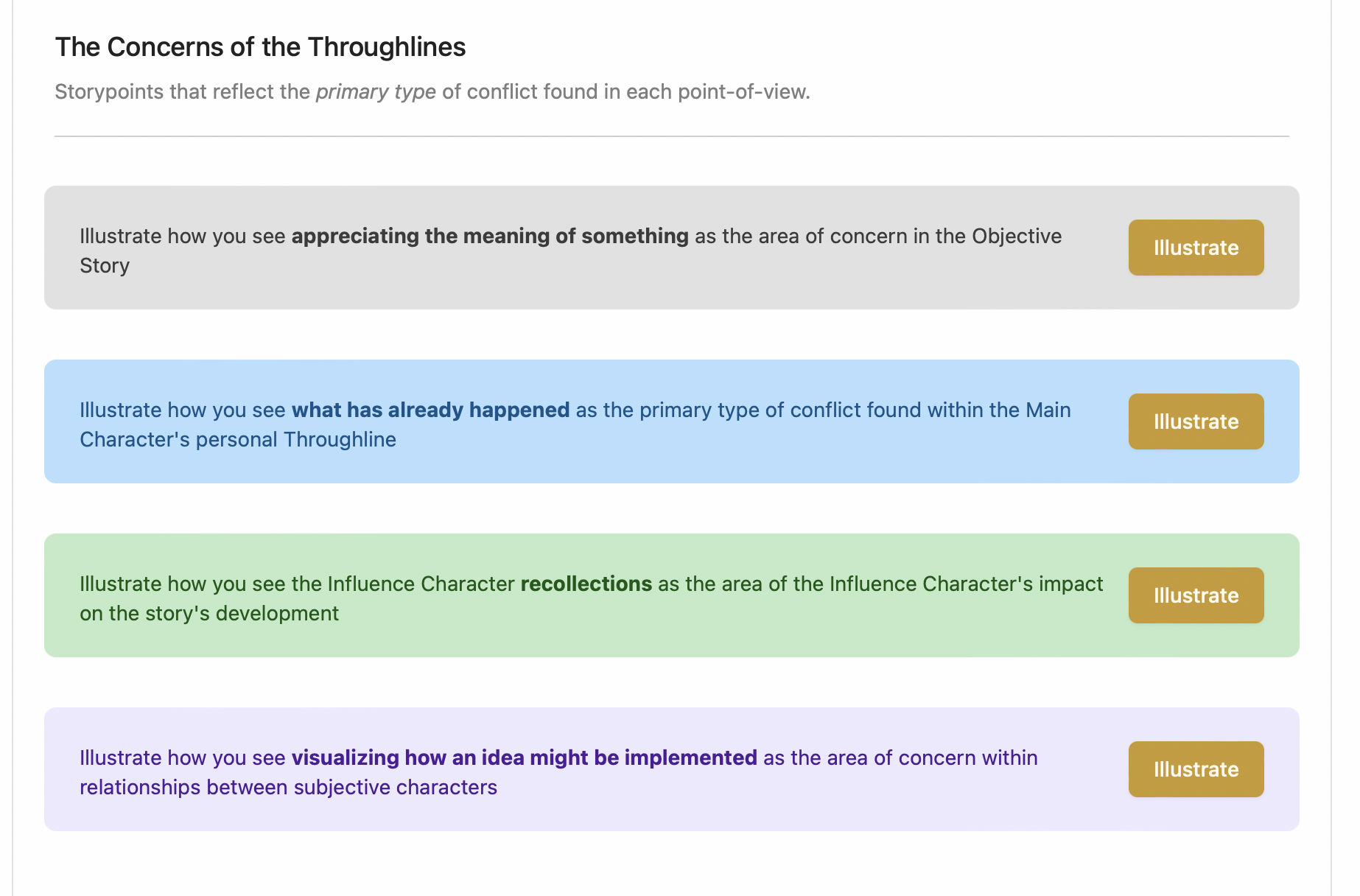 The Concerns of Each Throughline

We strongly suggest illustrating all eight Storypoints in the Illustrating view: the four Domains and the four Concerns. Doing so will not only provide better results from Subtxt AI, but will also grant the extra-added benefit of allowing you to better understand your story.

Questions and Answers for Storypoints

As mentioned earlier, the primary mission of Subtxt is the education and enlightenment of storytellers everywhere. To help support this initiative, the bottom right-hand corner of every Storypoint holds two icons of interest: a Question mark and an Information mark.

Clicking the first opens up the definition of the Storypoint in question, and offers suggestions of how to approach illustrating that Storypoint within your story. 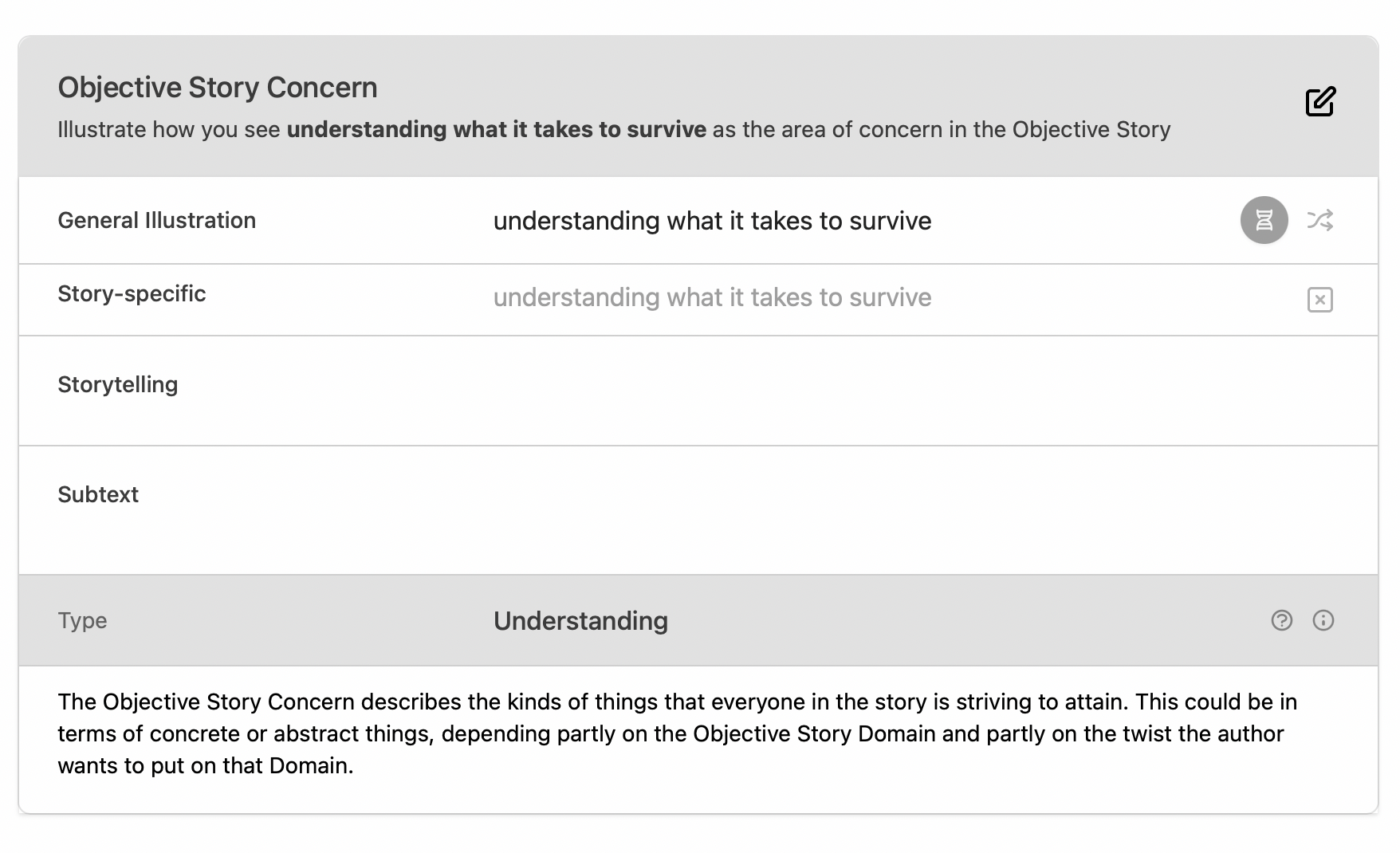 The Definition of an Objective Story Concern

Tapping the second mark, opens up a carousel of Storytelling and Illustration examples for stories similar to the one you are currently working on in Subtxt. 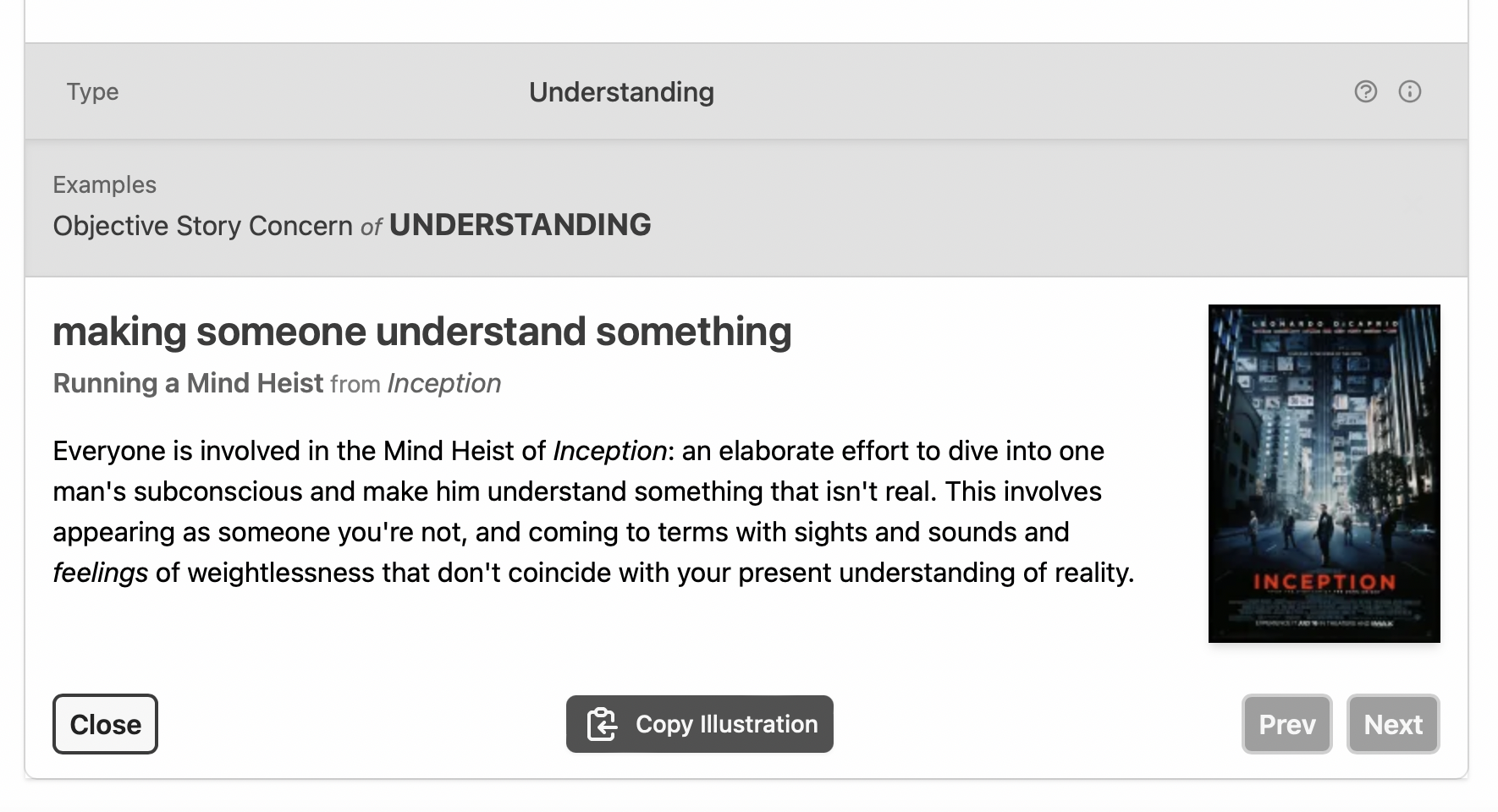 An Example of Understanding as an OS Concern

In the example above, you can see that the film Inception shares the same Objective Story Concern of Understanding from Aliens. While drastically different in Storytelling, the underlying source of conflict in both plots centers around what happens when people don't appreciate or understand the same things.

And the same goes for The Sixth Sense as well. 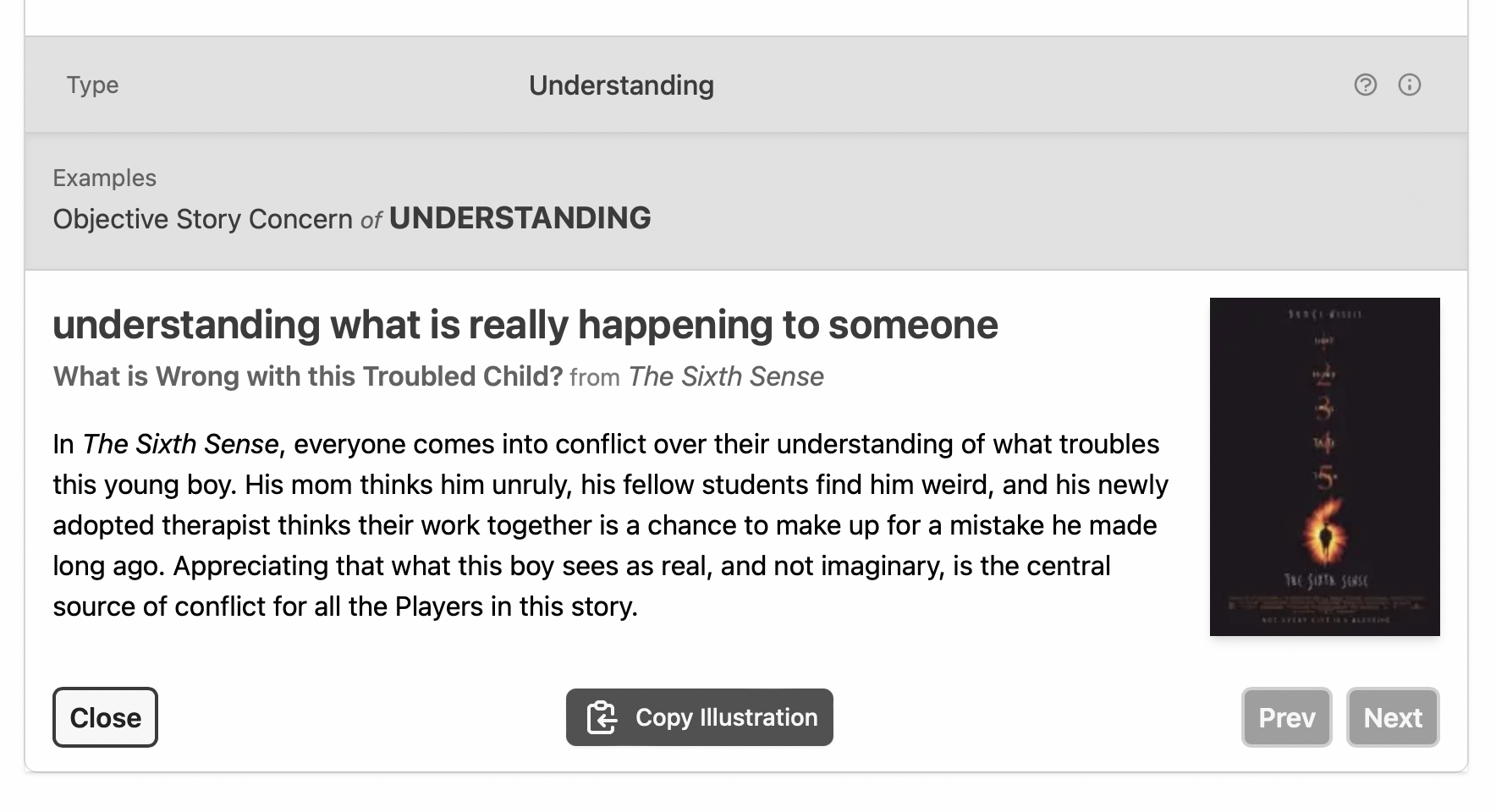 Another Example of Understanding as an OS Concern

You can continue to cycle through all the available examples by clicking "Prev" or "Next", or you can click "Close" to return to the Storypoint card.

If you find an Illustration Example that you would like to build from, simply tap "Copy Illustration" and Subtxt will copy and paste the Storytelling from that film or novel into your story. 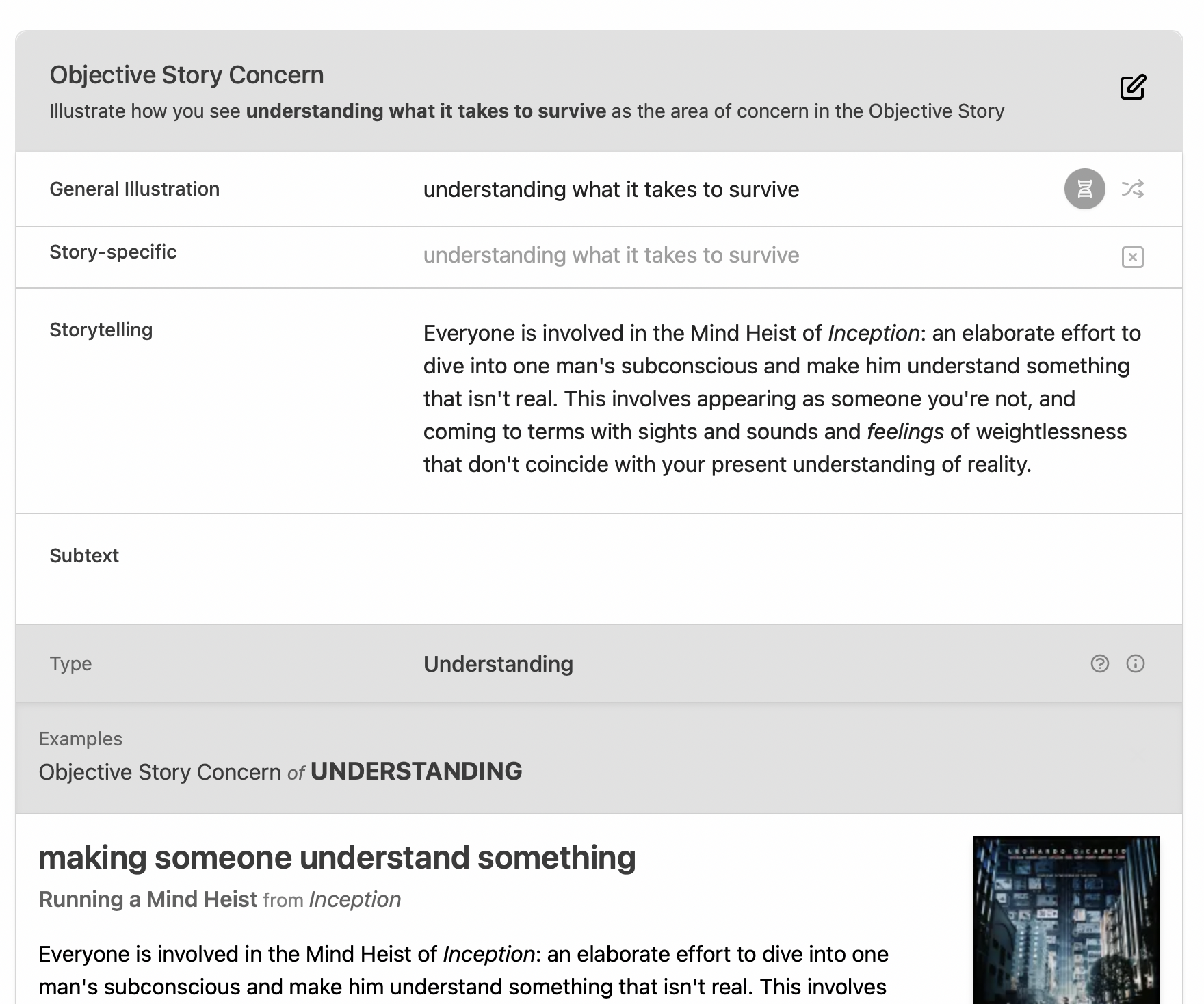 From here, you can change the names and faces and even branch out on your own as you further define what it means to see this Storypoint in your story.

If you find yourself confused by a particular Storypoint you can refer to these Examples and find a film, or novel, that explains it clearly to you. If you're not familiar with the work, you can watch it (or read it) to get a better understanding of how this particular Storypoint appears in a complete and meaninigful narrative.
Assigning the Players ← → Illustrating Storybeats