The Conceptulaizing section in Subtxt is where you form the foundation for the meaning of your story. This is where you can change the title, adjust the logline, and dive into the two key Elements that form the basis for your entire work. 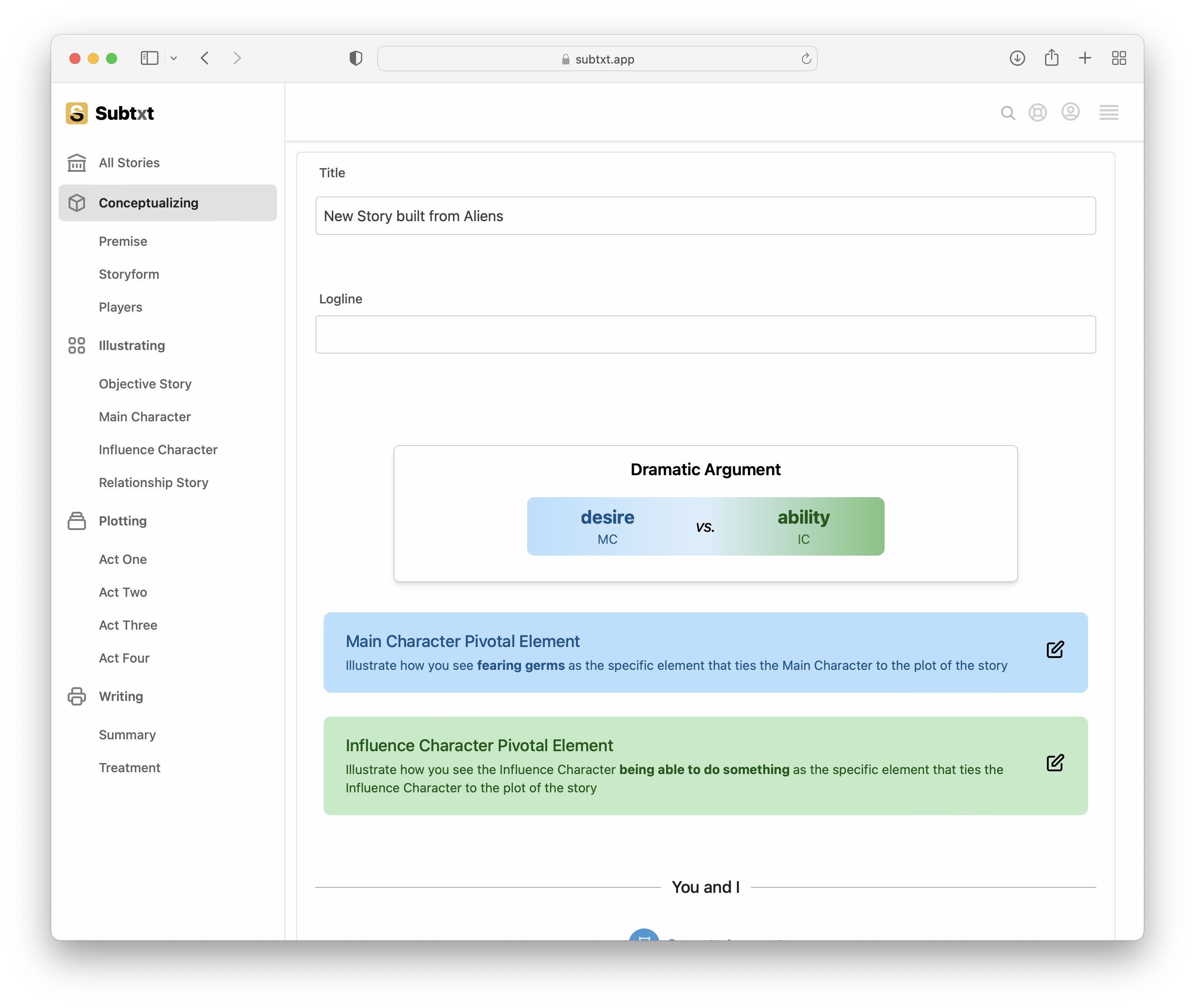 Feel free to change the title of this story, and don't worry if you don't know it at first. You can always update and change anything you write in Subtxt. Same with the logline.

Subtxt is a reactive writing tool—which means it responds to your intent across the entire story, and in every other view. You don’t have to hit Save all the time, nor do you have to Find and Replace when you decide you want to call your character something else. Make the change and Subtxt responds accordingly—giving you more time to focus on writing your story.

The Two Key Elements of Your Story

The Pivotal Elements, both Main Character and Influence Character, represent the crossover points between Character and Plot in your narrative. That clichéd scene where one says to the other, "You and I are both alike"? That's all about these two Elements.

The Dramatic Argument of Ability

The above argument of desire vs. ability is taken from James Cameron's Aliens. Ripley is the Main Character and Newt, the little girl they discover on the planet, is the Influence Character. Ripley takes the position of doing out of fear, of not wanting to lose again. Newt takes the opposite position of being able to face anything, even if a small child.

While they don't come right out and say it, deep down inside they both have a similar issue of dealing with nightmares--it's just that one is coming from a place of fear (desire) and the other is coming from a place of competency (ability). This "argument" fuels conflict throughout the entire narrative, and not just between the two of them. The Marines themselves also deal with their own fears and problematic desires, but on a much more objective and logical level.

Diving Deep Into a Storypoint

The Main Character Pivotal Element is what we call a Storypoint: a singular reference point tied directly to the thematic message of the narrative. Open it up and you can start to get an idea of what it's like to know the precise subtext of each character's position in your story.

Every Storypoint in Subtxt is divided into two sections, Storytelling on top and Subtext down below. If you take the familiar analogy of an iceberg, you can start to develop a mental model of what we're doing here with Storypoints. 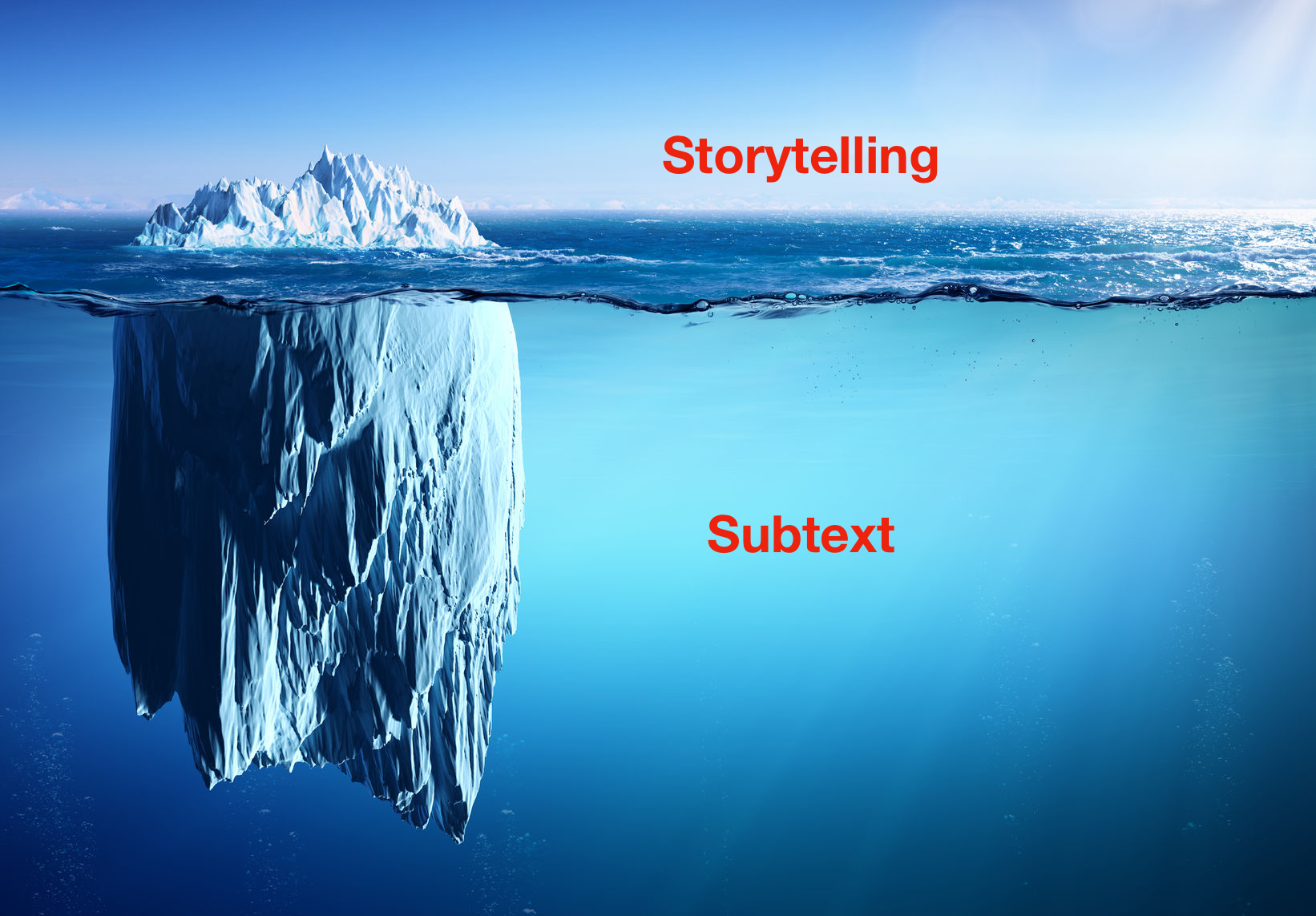 We will cover this more in greater detail in the Storypoints section of this Guide, but for now you can see that Storytelling consists of General and Story-specific Illustrations, along with a section for Storytelling. This is where you write what your Audience sees and how they come to understand this Storypoint.

The Subtext down below is where you explain why this Storypoint exists and gain insight on how to better deliver this part of your story to your Audience. The Subtext is for you (the Author), the Storytelling is for the Audience.

Not sure where to start?

That's where that Subtxt AI circe button comes into play.

Before we make any adjustments of our own, go ahead and press the AI button and watch what happens. 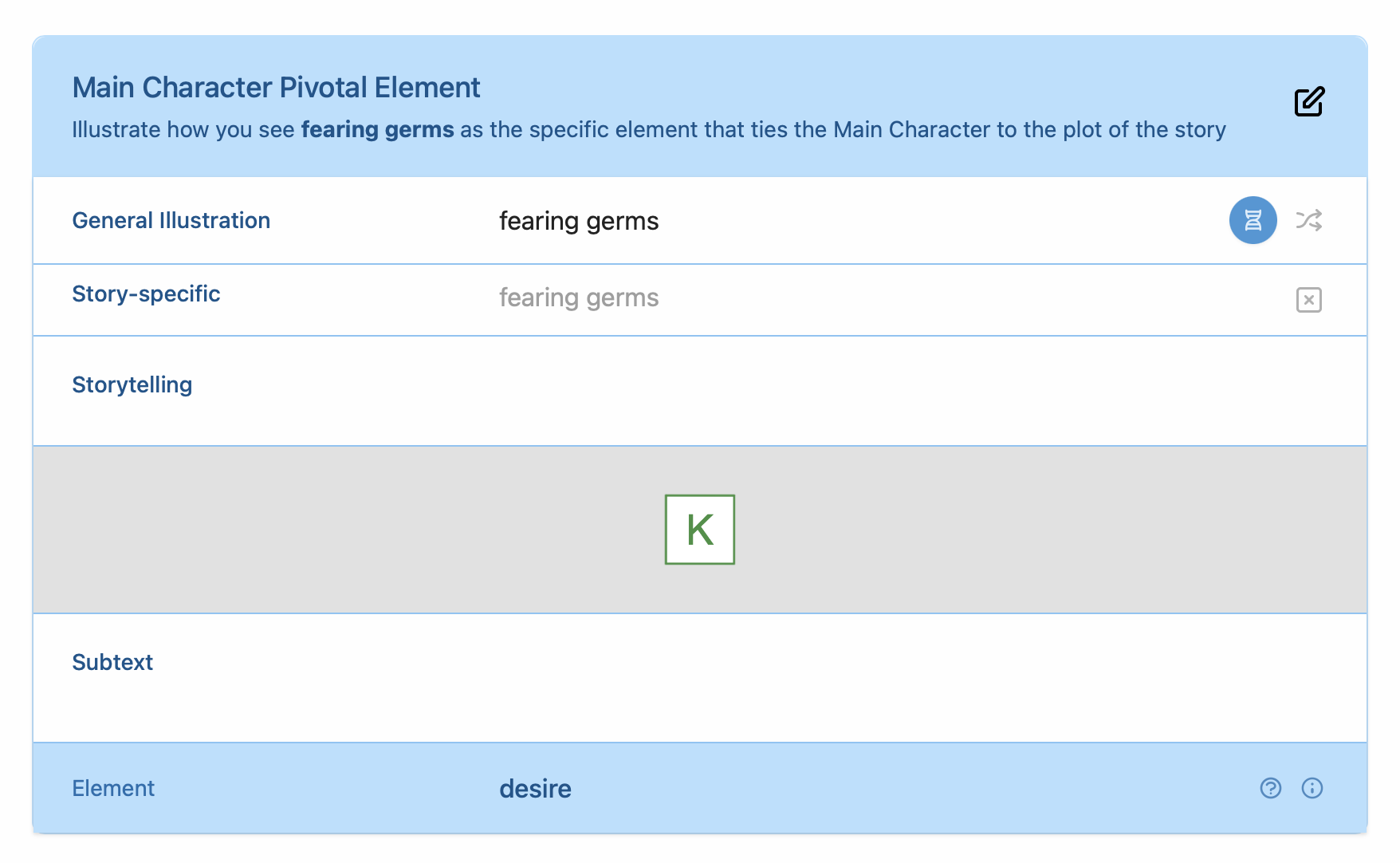 Subtxt AI reaches out to the world's leading natural language system (OpenAI's GPT-3) and asks it to expand upon this idea of desire as the basis for an argument. When the answer returns, Subtxt lists out the various possible ways you can bring that concept into your story. 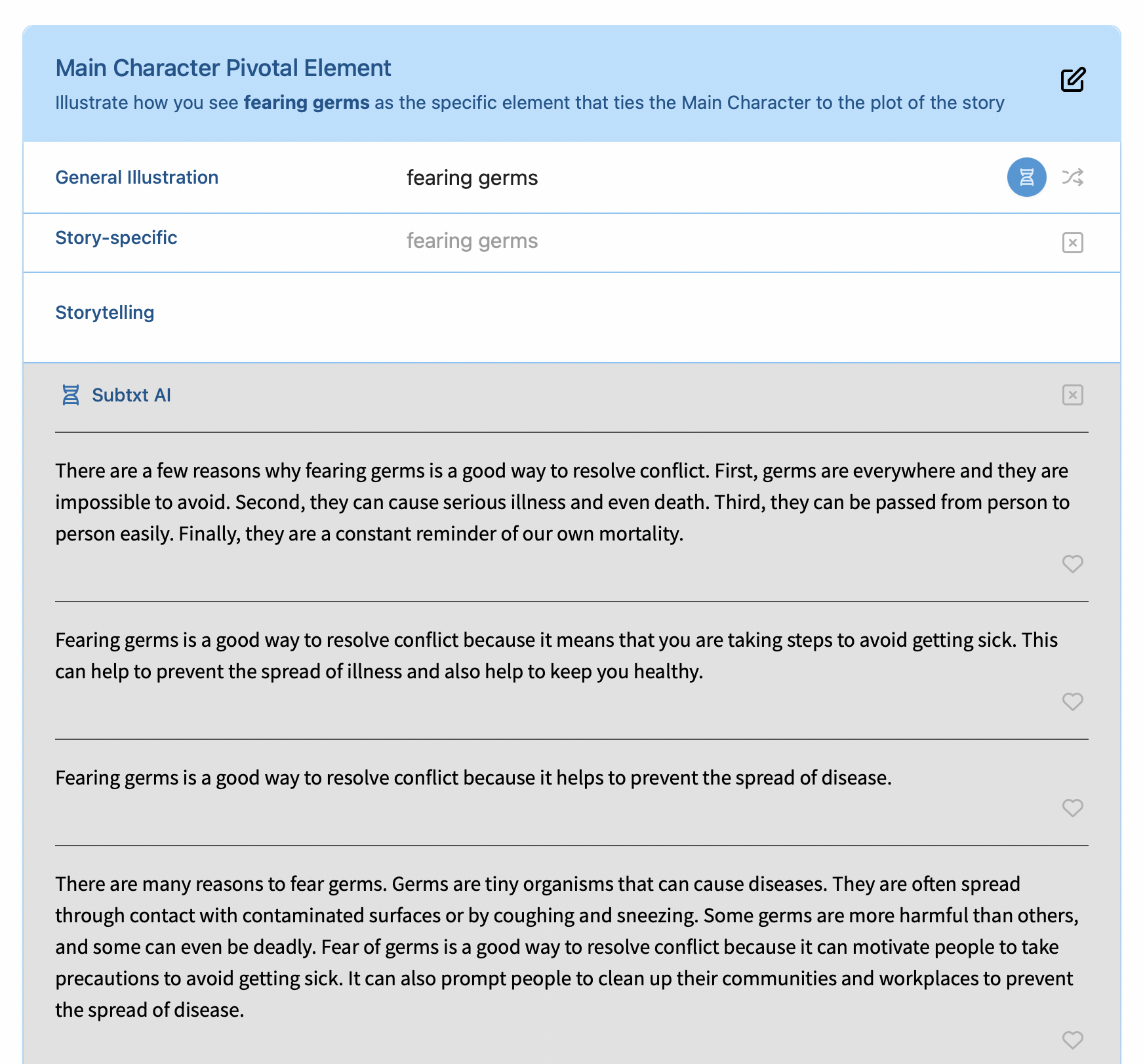 Imagine if instead of being completely terrified of chest-bursting aliens, Ripley was frightened of germs. If she were to posit this argument in the story, especially to Newt, she would likely use one of these ideas as a basis for her point-of-view.

While initially silly, one can start to see how the Storytelling separates from the Subtext of a narrative. Ripley would still be driven by desire, and she and Newt would continue to have the same basis for their argument that eventually leads them to getting closer.

It's just that the storytelling itself would be different.

That's why two stories with the same exact narrative can appear on the surface to be completely different.

Making the Storytelling Yours

Again, while we go into this in more detail later the process is quite simple. "Heart", or like/save, the ideas you like and Subtxt will drop them into the Subtext section of your Storypoint. 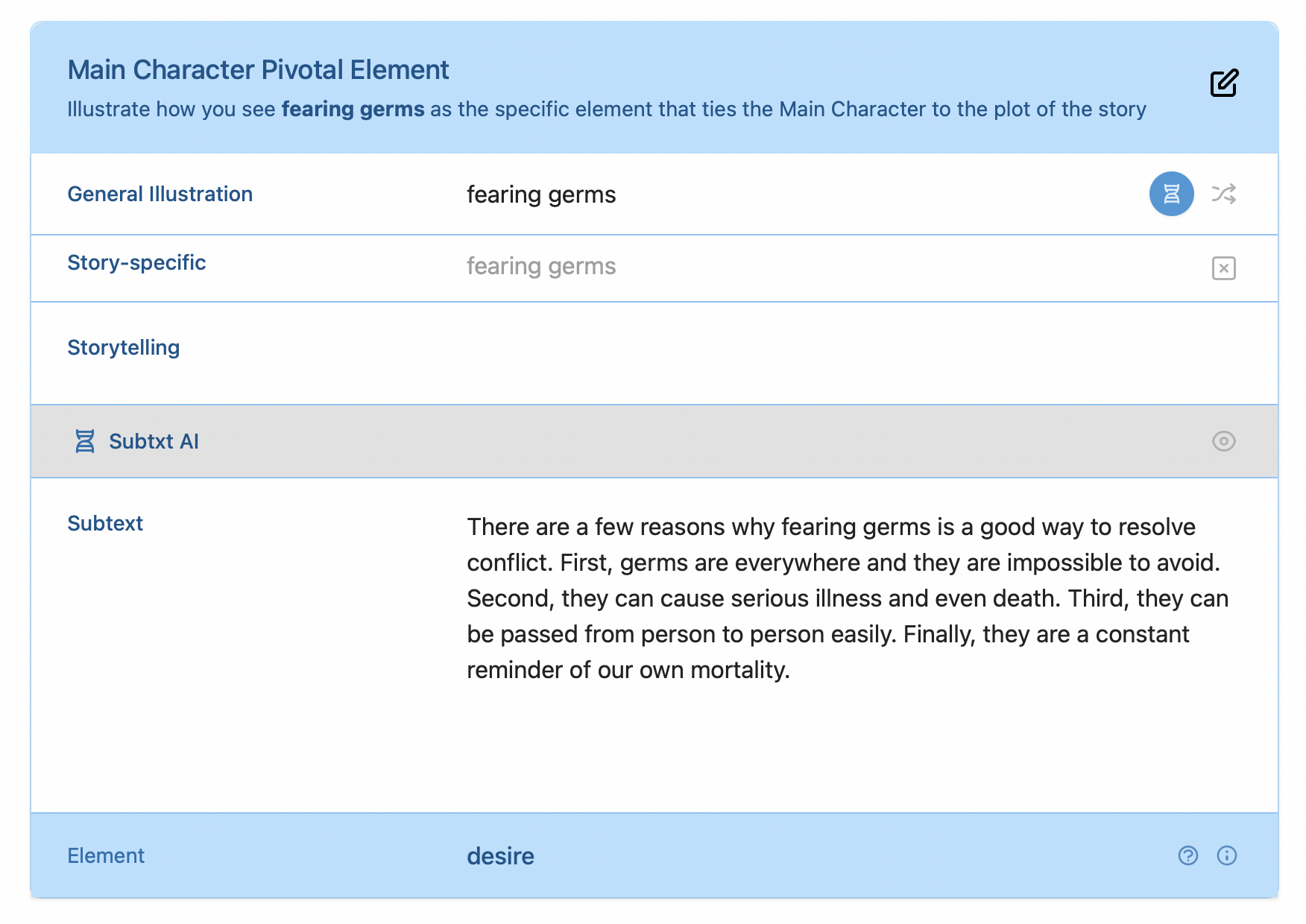 You can add as many as you like, directly edit them in the Subtext section, and even change the General Illustration above (or make it specific to your story), and roll the dice again for another round of ideas from Subtxt AI. 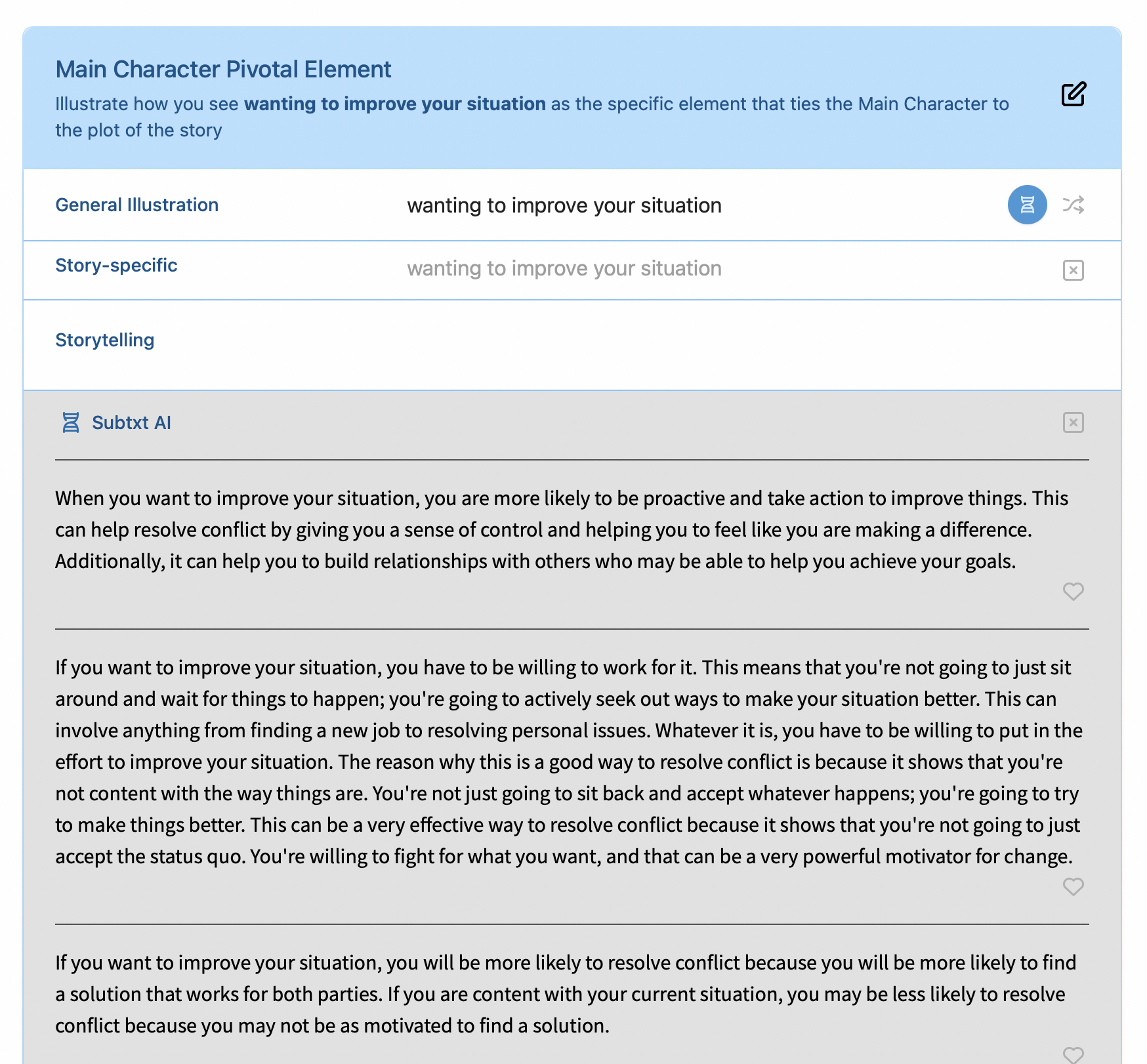 Here, we adjusted the General Illustration of desire for Ripley to be about "wanting to improve your situation." While completely different from "fearing germs", you can see again that there is a sense of thematic consistency with the first being about not wanting something, and the second about wanting something.

This is the power of the Subtxt approach. You can feel free to stretch your creative wings through all kinds of different Storytelling ideas, AI-generated or not, and Subtxt will make sure that the Thematic Intent of your story (your Premise and meaning) stays consistent and on-topic.

That's how you build a meaningful story. 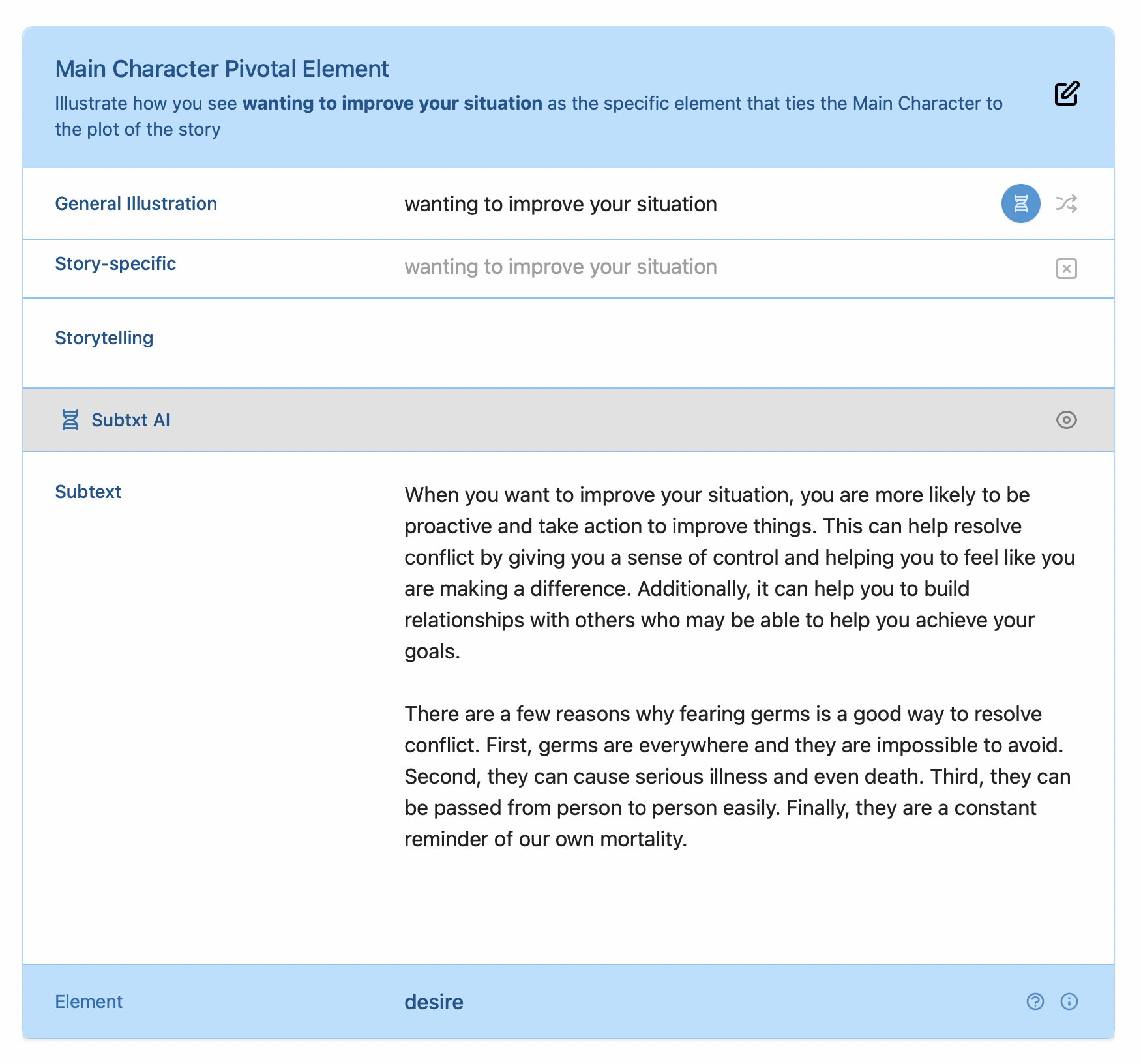 And just so we're absolutely clear, this has NOTHING to do with the concept of wants/needs in a character. In the example above, the specific Element driving the Main Character is an abundance of unwanted desire. This is not the same for every character and every story. In fact, it's usually quite different. What a character wants and what a character needs is NOT the subtext of a story. It's a misguided understanding of how narrative works.

We can continue to build several ideas on top of this until we start to craft the kind of point-of-view that makes sense for our Main Character. And then we can do the same for our Influence Character.

And we can do the same for the hundreds-more Storypoints and Storybeats within a single narrative. 😅

Making the Premise Your Own ← → Assigning the Players