Next up, the characters of your story.

But instead of characters—think of them as Players, vessels for holding the intent of your story. Think of your characters as buckets of meaning. They carry the meaning of your story to your Audience.

Tap Players, and Subtxt presents an impressive view for assigning your buckets to various Throughlines in your story. 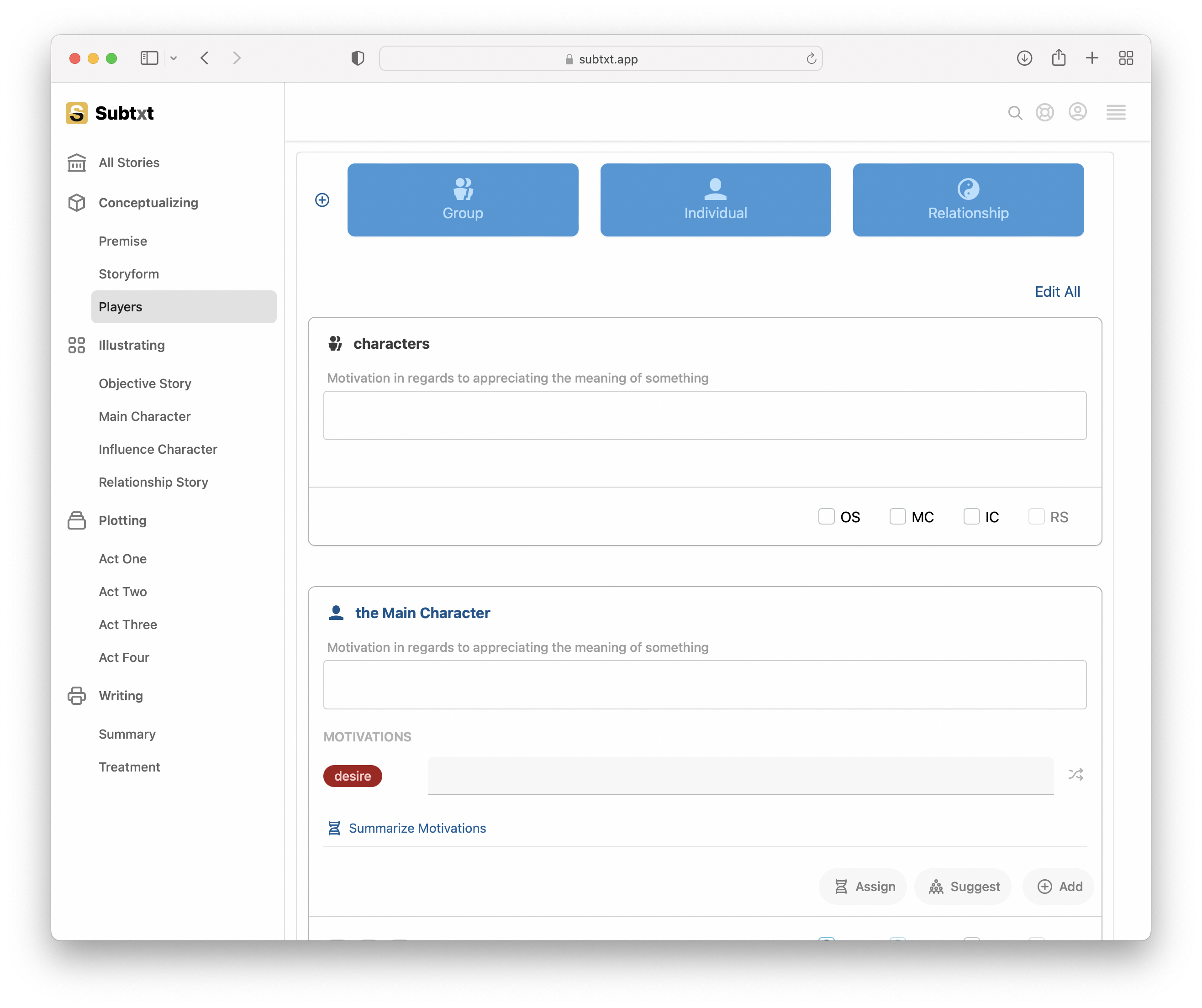 Covered in more detail in the Players section of this Guide, we can easily add Groups of Players, Individual Players, and "Relationship" Players.

As with the Premise, Subtxt randomly assigned four key Players:

These four generic Players represent the absolute minimum for any complete story. We strongly suggest adapting these to your story as soon as possible as you'll get better results from the AI with specific illustrations of your Players.

We'll start with the easiest first.

The Main Character is easy, and you likely already have someone in mind. Tap on the Player Bucket and type in the name of the character through which the Audience will experience your story from a personal first-person point-of-view.

And while you're at it, go ahead and write a brief description of your Main Character into the Motivation box below. 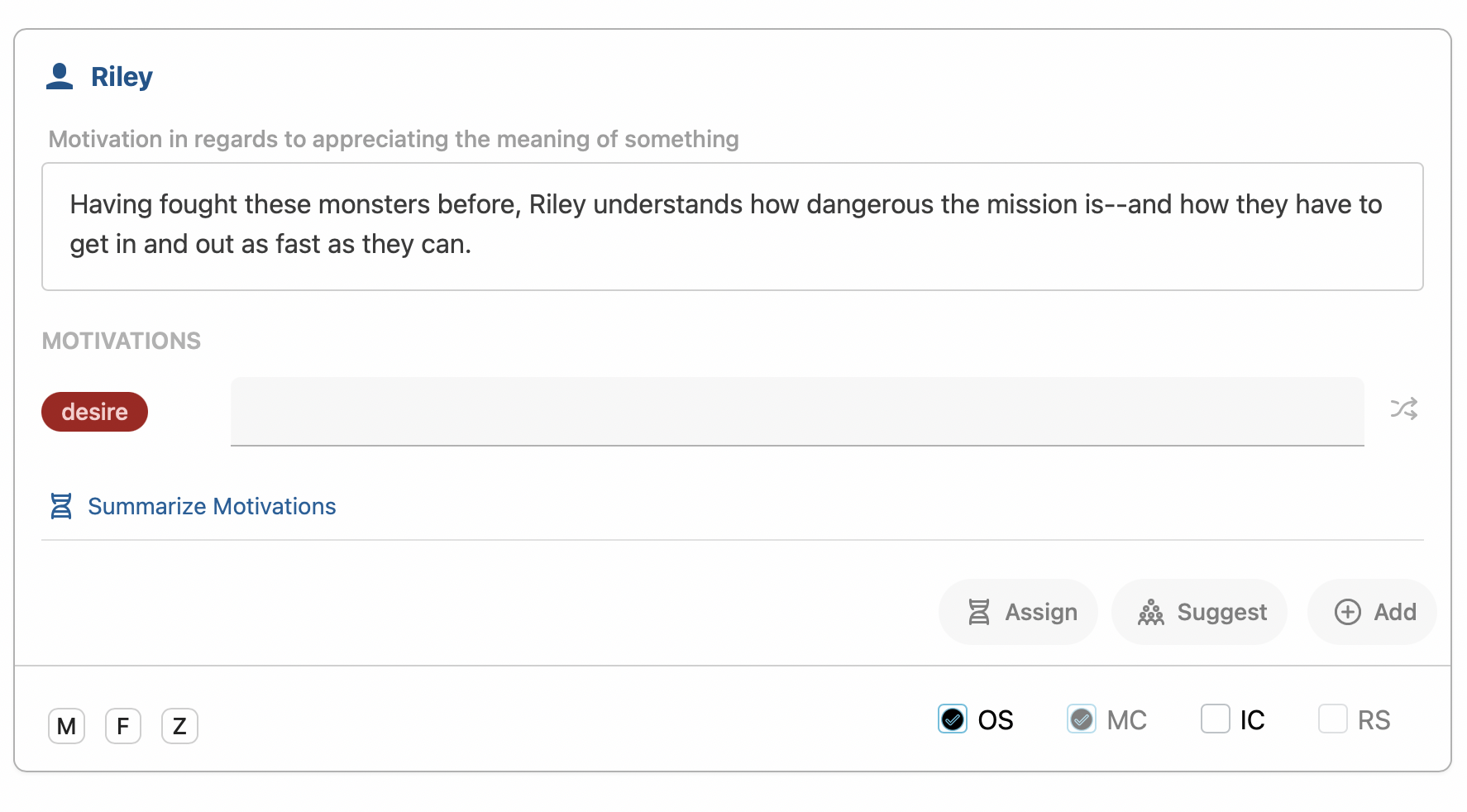 Note how in the example above, we changed the name from Ripley to Riley--this is on purpose because of what we're going to do next. We wanted to make sure there wasn't any inherent bias with the name and the artificial intelligence.

Tap "Assign" and you'll see what we mean. 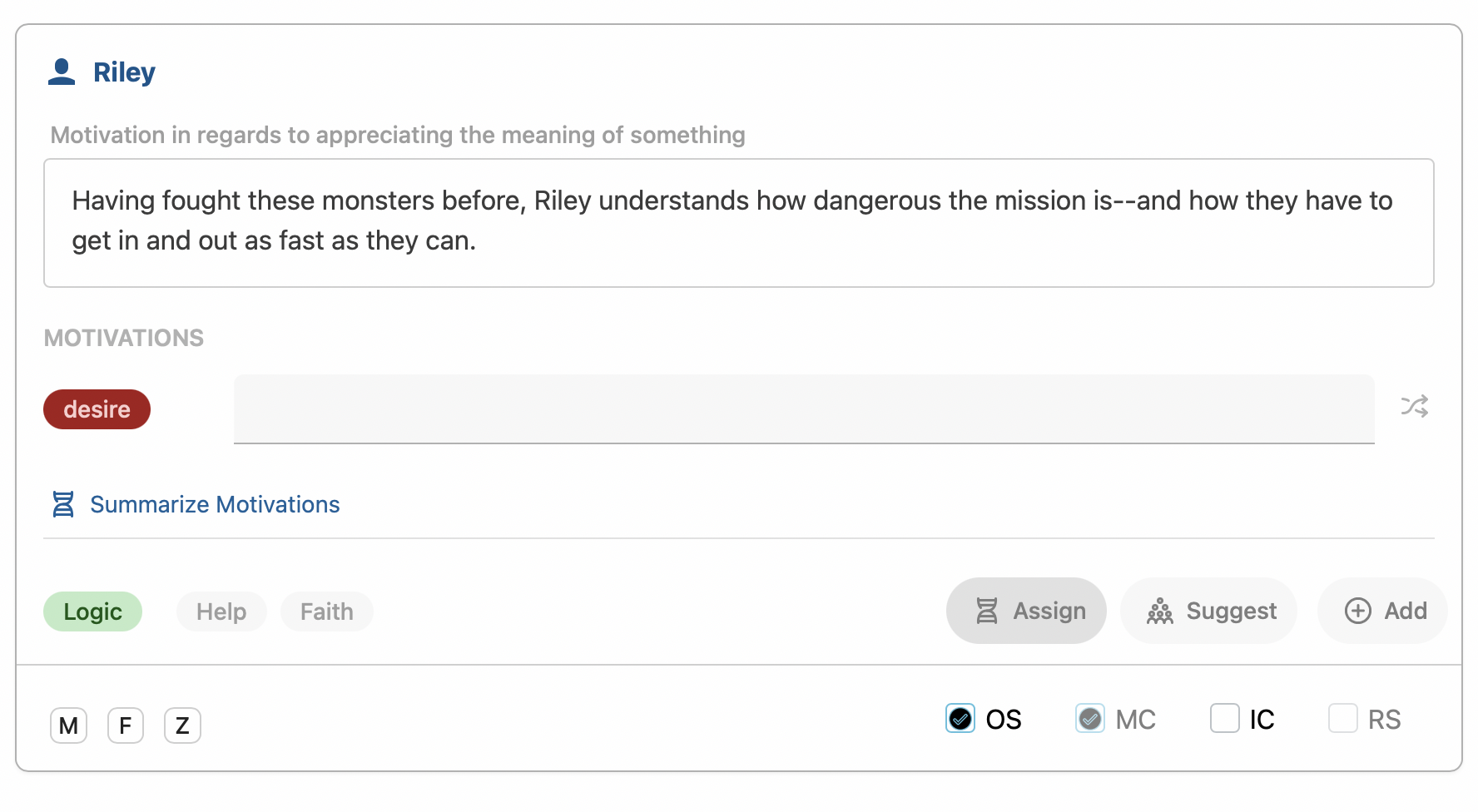 How incredible is that?

Do you see those Elements listed in the bottom left-hand corner of Riley's Player card? Subtxt AI read the Illustration of her Motivation that we wrote and intelligently deciphered the key thematic Elements driving that motivation.

When it comes to really understanding what is going on with these monsters, Riley is motivated by Logic first. And then, if we want, we can also add Help and Faith to her Player card as well. And these make sense: she's driven by logic first and foremost (this is a losing battle), she wants to help keep everyone alive (Help), and she has absolutely no faith they will survive (Faith!).

With this understanding, we can even re-write the Motivation to better understand how Riley will react throughout the story.

And SPOILER ALERT: It also makes it possible for Subtxt to intelligently decide for you how each Player will act and interact throughout the entire story. 😊

And we can do the same for the other Players in our story.

In every complete story, there’s always one character who does things a little differently; someone who stands out, and challenges the Main Character to grow a little. That’s the Influence Character.

Now, if you don’t know who that is yet, don’t worry—you can continue to develop your story and come back to the actual name later. As you progress in developing your story with Subtxt, your choice for Influence Character will naturally arise from everything else you are doing.

If you do, enter the name in the bucket that says Influence Character.

If you struggle with selecting an Influence Character, refer back to the original film or novel from which you chose the Premise. Check the Storyform in Subtxt to be reminded of who was the Influence Character, and experience the story again. Chances are, you’ll quickly start to develop an intuitive sense of who this character is in your story.

The vital relationship of your story is super important—and most often, misunderstood. An entire series of articles on The Relationship Story Throughline should help you out, but in the meantime, define the relationship between the Main Character and the Influence Character.

And do it from the point-of-view of someone talking about them—not from within.

The most difficult hurdle for every Author developing a story with Subtxt is getting out of the heads of the characters in their story. Structure is not seen from within, it’s only seen from without—from your perspective as Author.

When it comes to the Relationship Story Throughline and Subtxt, write about the relationship—not what it feels like to be in that relationship.

Some ideas for various relationships:

The list goes on and on. Select one, enter it, and then move on to the last bucket: the characters themselves.

The last bucket is the most abstract when it comes to characters—but also, the most basic.

Stories work because they present a point-of-view of conflict from within and from without. You already know your Main Character from within, now step out of his or her body and look back. What do you see?

Do the same for the Influence Character, and for all your characters. How are they grouped?

In the most likely sense, your story contains a group of “good” guys and a bunch of “bad” guys (Yes, truth is subjective—one man’s freedom fighter...). These groupings of characters signify an objective sense of their purpose in a story—perfect for the objective Objective Story Throughline.

Determine the central “good” guy group and enter their name into the “characters” bucket.

When looking at characters from the Objective Story perspective, objectify them by identifying their function within a story. In Star Wars, Luke is the Whiny Farmboy, Han is a Space Pirate, and Ben is a Wizened Wizard. Looking for function pulls you out of your characters’ headspace—a skill you want to develop more than anything else.

With buckets labeled and assigned to individual Throughlines, it’s time to start walking through your story.