Know what to write next

with a proven framework for writing complete stories 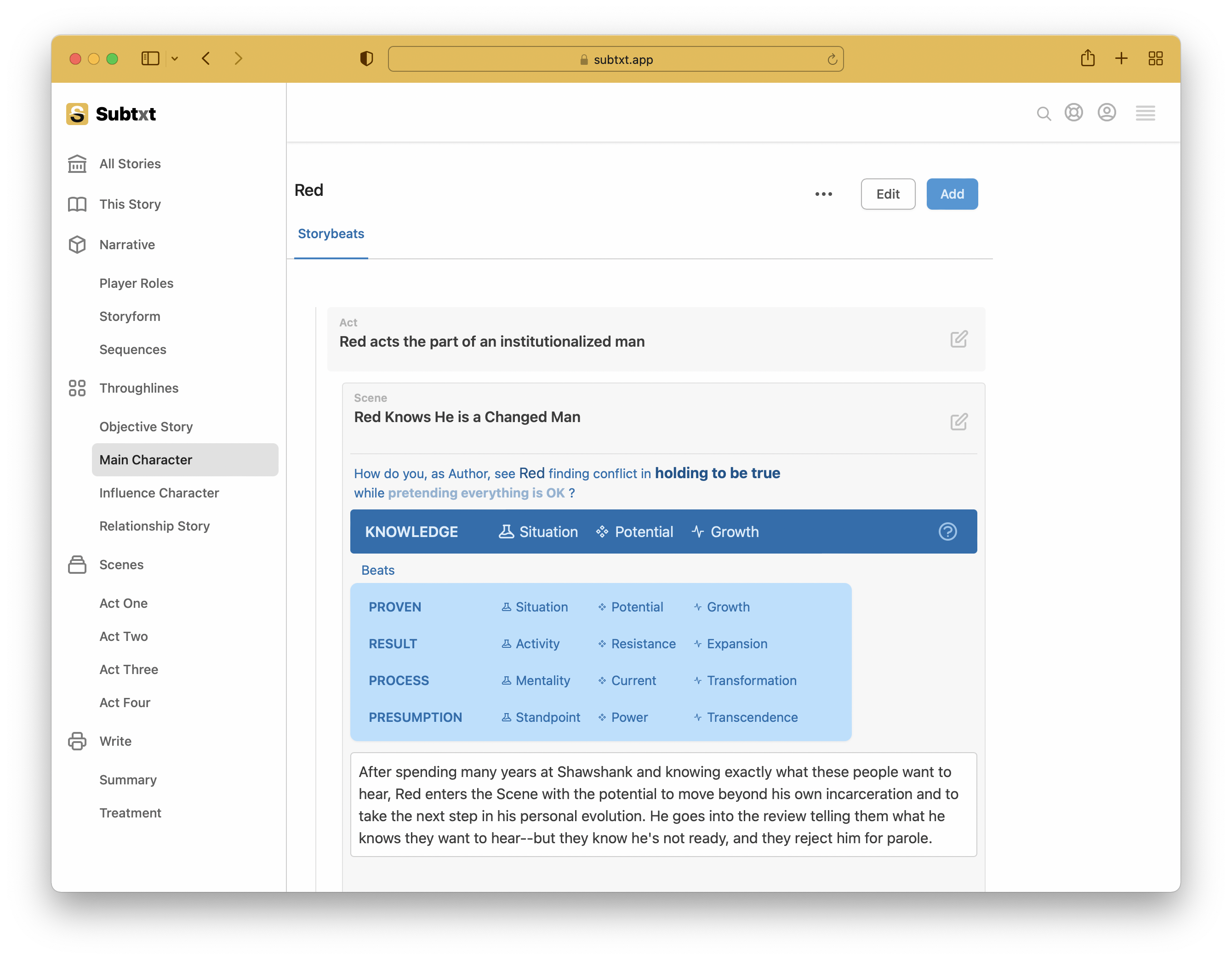 In short, Subtxt takes what it is you want to say with your story and then converts it into a list of thematic Storybeats consistent with your message.

You still have to write the whole thing yourself, but now you have an intelligent outline to challenge your imagination.

It's like having an objective writing partner always ready to take your call.

Have something to say.

a) you believe, like Robert Towne (the screenwriter of Chinatown), that stories are four or five moments between two characters--and that these conversations are dramatic arguments meant to convey greater meaning

b) you appreciate there is a benefit to an orderly argument

If you don't buy into this idea of story as dramatic argument or you believe story structure to be completely chaotic, then Subtxt is not for you.

It's all about projection.

Subtxt is a model of human psychology.

While there are a complicated set of algorithms behind Subtxt, the basic idea is really quite simple: when we come into conflict over an argument we automatically project our own biases and preconceptions onto others.

Subtxt models this natural process ("It's not my problem, it's yours!") and then breaks it down into a set of ordered steps.

The rest is up to you.

Where You Fit In

How you illustrate Subtxt's Storybeats is where your artistic talent steps in and elevates the argument to something a computer simply can't do.

No one goes to the theater or picks up a novel to read story structure. That's why you can't write your story in Subtxt.

We know how easy it is to get caught up in endless outlining, so we designed Subtxt to help you define your artistic intent (the message of your story), and then quickly take that to your favorite writing application.

Once you start writing, you really shouldn't look back at Subtxt.

That is...until the next story.

The best thing about writing a story with Subtxt is what it tells you about your story: key moments that reflect the argument you're making to your audience.

And John is only one of the many professionals who trust Subtxt to help develop their projects.

Subtxt is a subscription-based application and is in active development. Expect updates weekly, if not daily.

And if you ever run into a block, expert support is a tap away.

Hi, my name is James Hull and I'm fanatical about storytelling.

From the very first day my Dad brought home a couple of scripts from the television series, CHiPs, I knew I wanted to be a part of taking the written word to screen.

In 1992, I was approached by Andrew Stanton and John Lasseter to join Pixar's story department for what would be their first animated feature. They had seen my CalArts student film and thought I would be a good fit.

Of course, I declined.

At the time, Pixar was only doing Lifesavers commercials and besides, what I really wanted to do was become a Disney animator. So I spent the summer working at Magic Mountain while Andrew and John went back up north to make Toy Story. 😫

Thankfully, I did become a Disney animator. But not before spending my first year out of CalArts writing and boarding for legendary animation director, Chuck Jones. Yes, that Chuck Jones (still so grateful after all these years to have worked with one of my heroes, and discovering a new one, production designer Maurice Noble).

At Disney, I started as an assistant on Pocahontas, Hunchback, Hercules, and I think Mulan (can't remember), before being promoted to Character Animator on Tarzan.

After that, I exchanged my pencil for a mouse and became a 3D animator, working on a million films for DW starting with Shrek 2 and Madagascar, and ending with Croods and Me and My Shadow (which was supposed to be a 2d/3d hybrid!).

It was during the 7-year stretch between Shrek 2 and How to Train Your Dragon that I started to turn my attention back to story. I found it extremely difficult to animate on films that I thought didn't have great stories (S2 and Dragon were the exceptions) and so I set about finding a way I could contribute.

First, I turned my attention back to my alma matter, the California Institute of the Arts, and taught Story Development there for seven years. I met some amazingly talented young students there (some of who are now acclaimed writers and directors!), and loved the opportunity to talk about story at a higher level. Teaching there was basically a LIVE version of the hundreds of articles I've written on my company's site, Narrative First.

I loved teaching at CalArts, which is why I'm glad I can now do the same thing online (just without the 50K/yr. price tag!). But I also knew I needed to do more.

Eventually, I sold a film concept/property/story treatment to Dreamworks and as part of the deal switched over to the Story department. I worked on Peabody and Sherman, but not for long--I wasn't really interested in becoming a "gag"-man--I was more interested in the story as a whole, knowing that was where my strengths lied.

So I left, and took a bit of a detour as I returned to Disney to animate on many theme park rides (the Mine Train ride in Florida, and Snow White's castle in Shanghai). It was there that I hooked up with Executive Producer Chris Sonnenburg at Disney TV and helped develop the beloved animated series, Tangled: Ever After.

Time ran out at Disney Special Projects, so I packed my things and landed a directing gig at Dreamworks TV. I directed several episodes of Puss n' Boots, a unique situation where I was able to put some of my story concepts and ideas into action.

But it was at the end of that project, that my now wife suggested--no, demanded--that I set out on my own and create the story company I always dreamed of. Stop working for other people. And so I did. Which brings us to--

Why didn't I get started earlier?

Since 2016, I've been helping writers, directors, executive producers, novelists, playwrights, game developers, and even documentary filmmakers write stories and I've never been happier. Seeing them receive awards or accolades for the work we did together is extremely rewarding--even moreso than if I had set out to do it all on my own.

Which is why, in 2017, I decided it was time to find a way to scale myself beyond what I could physically do during the day, and set out to create an app to do just that.

And that's how Subtxt came to be.

I taught myself frontend and backend development. Spent endless hours writing code and debugging code. And during the pandemic, found a way to carry the meaning of a story all the way down into a single scene.

Which I find pretty remarkable.

It's not a magic bullet--but, it is magic. And I'm grateful for each and every user (numbering in the thousands now!), who tells me they appreciate all the work I put into it.

It's those encouraging words that mean so much, especially when you're someone like me who thinks there is always something new to learn about telling a story just around the corner. With the technology behind Subtxt, I can consistently and frequently update the application whenever I discover something new.

And watch it spread out and reach so many across the world within a matter of milliseconds.

It's the re-writing process at scale. And it's instantaneous.

And I'm thankful to be a part of it.